U.S. Bank Tower, formerly Library Tower and First Interstate Bank World Center, is a 1,018-foot (310.3 m) skyscraper at 633 West Fifth Street in downtown Los Angeles, California, United States. It is, by structural height, the third-tallest building in California, the second-tallest building in Los Angeles, the Eighteenth-tallest in the United States, the third-tallest west of the Mississippi River after the Salesforce Tower and the Wilshire Grand Center, and the 129th-tallest building in the world, after being surpassed by the Wilshire Grand Center. [8] It is the only building in California whose roof height exceeds 1,000 feet. Because local building codes required all high-rise buildings to have a helipad, it was known as the tallest building in the world with a roof-top heliport from its completion in 1989 to 2010 when the China World Trade Center Tower III opened. [9] It is also the third-tallest building in a major active seismic region; its structure was designed to resist an earthquake of 8.3 on the Richter scale. It consists of 73 stories above ground and two parking levels below ground. Construction began in 1987 with completion in 1989. The building was designed by Henry N. Cobb of the architectural firm Pei Cobb Freed & Partners and cost $350 million to build. It is one of the most recognizable buildings in Los Angeles, and often appears in establishing shots for the city in films and television programs.

On July 20, 2020 it was announced that Larry Silverstein, the developer of the World Trade Center, purchased the building for reportedly 430 million dollars. The deal is expected to close in late September and what Silverstein is planning for the building is currently unknown. [12]

The building was first known and is alternatively known today as the Library Tower, because it was built as part of the $1 billion Los Angeles Central Library redevelopment area, following two disastrous fires at the library in 1986, and its location across the street. [13] The City of Los Angeles sold air rights to the developers of the tower to help pay for the reconstruction of the library. The building was also known for a time as First Interstate Bank World Center but the name Library Tower was restored after First Interstate Bancorp merged with Wells Fargo Bank. In March 2003, the property was leased by U.S. Bancorp and the building was renamed the U.S. Bank Tower. Some local residents however, continue to refer to it as Library Tower.

The tower has a large glass crown at its top that is illuminated at night. [14]

On June 16, 2004, the 9/11 Commission reported that the original plan for the September 11 attacks called for the hijacking of ten planes, one of which was to be crashed into the building. [15]

On October 6, 2005, House[ discuss] officials stated that the government had foiled a previously undisclosed second plot to crash a plane into the building in mid-2002. In his televised 2006 State of the Union Address, President George W. Bush asserted that American counterterrorism officials foiled a plot to fly planes into the tower, which he erroneously identified as the “Liberty Tower” instead of the building's former name, the Library Tower. [16] According to President Bush, Al-Qaeda leader Khaled Sheikh Mohammed's plan was to use Asian confederates from Jemaah Islamiyah recruited by Islamic militant Hambali for the hijacking. President Bush asserted the hijackers were going to use shoe bombs to breach the plane's cockpit door. Some counter-terrorism experts have expressed doubt that the plot was ever fully developed or likely to occur. [17] 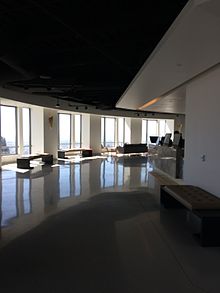 Interior of the OUE Skyspace on the 71st floor of the U.S. Bank Tower looking northwest.

In July 2014, OUE Ltd. (OUE), the new owners of the skyscraper, announced construction of an observation deck named OUE Skyspace. [18] on the 69th and 70th floors and a restaurant named 71Above [19] on the 71st floor. The facilities opened on June 24, 2016, [20] following remodeling and construction costing $31 million [21] that included a makeover of the ground floor lobby as well as a separate second floor entrance for tourists, and a skylobby and exhibit hall on the 54th floor. Access to the observation deck costs $25 per person. [22] For an additional $8 visitors can take a trip down a transparent glass slide affixed to the outside of the building between the 70th and 69th floors. [23]

The US Bank Tower was the world's tallest building with a roof-top helipad until the China World Trade Center Tower III in Beijing, which was completed in 2010 and whose roof-top helipad is 1,083 feet (330 m) high. [9]