From Wikipedia, the free encyclopedia
This article is about the light rail line in Los Angeles formerly known as the Expo Line. For other uses of the name, see Expo Line (disambiguation).
Metro line from Los Angeles to Santa Monica

The E Line (formerly the Expo Line) is a 15.2 mi (24.5 km) light rail line that runs between Downtown Los Angeles and Santa Monica. It is one of the six lines in the Metro Rail system, and is operated by the Los Angeles County Metropolitan Transportation Authority (Metro). The line opened in 2012.

Originally named the Expo Line after Exposition Boulevard, which it runs alongside for most of its route, [5] [6] the line was renamed the E Line in late 2019, while retaining the aqua coloring and icons used to designate it on maps. [7] When the Regional Connector is complete in 2022, the current E Line will be joined with the Eastside portion of the former Gold Line to create an extended E Line, which will be colored gold on maps. [8]

Route and stations of the E Line, relative to other Metro lines. Under construction or planned segment are shown as dashed lines.

Maximum speed on the route is 55 mph (89 km/h): speeds within Downtown Los Angeles and Downtown Santa Monica are reduced. [10]

The E Line largely follows right of way used by the Los Angeles and Independence Railroad steam railroad, built in 1875, [11] which was converted by Pacific Electric to electric traction and operated as the Santa Monica Air Line by 1920, [12] providing both freight and passenger service between Los Angeles and Santa Monica. Passenger service ended in 1953, and freight service stopped in 1988. [13]

Local advocacy groups including Friends 4 Expo Transit [14] supported the successful passage of Proposition C in 1990, which allowed the purchase of the entire right-of-way from Southern Pacific by Metro. In 2000, an urban art group known as Heavy Trash placed signs advertising a fictional "Aqua Line". The signs, with the text "Coming Soon", showed a subway route extending along Wilshire to the ocean, with 10 station stops. Although the campaign was a hoax, it demonstrated newfound support and revealed the frustrations surrounding the lack of rail service connecting Santa Monica and the Westside with Downtown Los Angeles. [15][ non-primary source needed] Metro released a Major Investment Study in 2000 which compared bus rapid transit and light rail transit options along what was now known as the "Mid-City/Exposition Corridor". [16]

An independent agency, the Exposition Metro Line Construction Authority, was given the authority to plan, design and construct the line by state law in 2003. After construction of the second phase was completed, the line was handed over on January 15, 2016, to the Los Angeles County Metropolitan Transportation Authority. [17]

The Regional Connector is an under-construction light-rail subway corridor through Downtown Los Angeles that is to connect the current A and E Lines to the current L Line, and to allow a seamless one-seat ride between the A and E Lines' current 7th Street/Metro Center terminus and Union Station. [23]

Once the Regional Connector is completed, the A, E, and Gold L will be simplified into two rail lines: a north-south line connecting Long Beach and Azusa, and an east-west line connecting Santa Monica and East Los Angeles.

In 2019, Metro began using a renaming system where each rail and bus rapid transit line receives a letter and color. As a result, the Expo Line became the E Line in 2019, and will be recolored from aqua to gold upon completion of the Regional Connector. [24] [25] [8]

The groundbreaking for the project took place on September 30, 2014, and the alignment is expected to be in public service by mid 2022. [26]

The Eastside Transit Corridor is a project to extend from the former L Line's terminus at Atlantic station eastward to Lambert station in Whittier. Partially funded by Measure M, construction is programmed to start in 2029 with service beginning in 2035, [27] though the project may be accelerated for the 2028 Summer Olympics. 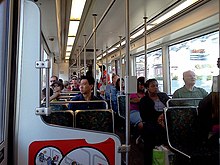 Interior of a westbound train, first day of operation to Culver City

The following is the complete list of stations from Downtown Los Angeles traveling west.

Previously, the light rail vehicles used on the E Line were maintained at the division 11 yard in Long Beach, California, the same maintenance facility that is used by the A Line. However, the new division 14 yard, located east of Stewart Street and north of Exposition Boulevard [30] in the vicinity of the 26th Street/Bergamot station in Santa Monica, was opened with the completion of Phase 2.

Compatible with the rest of Metro's light-rail network, the E Line shares standard Metro light rail vehicles ( Nippon Sharyo P2020, Siemens P2000, and Kinki Sharyo P3010) with the Blue Line. Metro estimates that it has 47 light rail cars to provide service on the E Line under the peak-hour assumption of 3-car trains running at 6-minute headways.

The E Line Bikeway parallels the route of the light rail line, and includes a mixture of bike lanes on Exposition Boulevard and off-street paths alongside the rail tracks. [31]