L.A. Live is an entertainment complex in the South Park District of Downtown Los Angeles, California. It is adjacent to the Staples Center and Los Angeles Convention Center. [1]

Initial construction at L.A. Live began in September 2005. [4] The first phase opened in October 2007 and contained Microsoft Theatre, the Microsoft Square, a retail plaza, as well as an underground parking garage, holding a fraction of the project's expected total of 4,000 parking spaces. [4]

The Los Angeles Downtown News reported on November 11, 2009, that AEG planned to submit significant expansion plans to the Planning Department on November 12. It includes "332,618 square feet (30,901.2 m2) of office space and a 269,182-square-foot (25,007.8 m2) broadcasting studio that could accommodate a nationwide cable television network, a 275-room hotel and a 25-story residential building with 65 units adjacent to the L.A. LIVE campus." [7]

For a time prior to the return of the Los Angeles Rams,[ when?] plans were being developed for the NFL to return to Los Angeles with a new stadium being planned on the campus, to be called Farmers Field. The Los Angeles City Council approved a non-binding memorandum of understanding (MOU) with AEG in a 12-0 vote on August 9, 2011. [8]

With the termination of the proposed sale of AEG and the departure of Tim Leiweke, which were announced on March 14, 2013, plans for the construction of Farmers Field effectively ended. [9] AEG abandoned the project in March 2015, after the then Oakland Raiders and the then San Diego Chargers, and St. Louis Rams (the three most likely candidates for relocation) all proposed their own stadium plans in the event they were to relocate to Los Angeles. [10]

Xbox Plaza [12] (formally Microsoft Square) is a 40,000-square-foot (3,716 m2) open-air plaza that serves as the central meeting place for L.A. Live. The Square provides a broadcast venue featuring giant LED screens as well as a red carpet site for special events. [5] Xbox Plaza hosted the first WWE SummerSlam Axxess event on the weekend beginning August 22, 2009, leading up to the 2009 SummerSlam event on August 23 at Staples Center. On June 24, 2010, the Square was the location for the official red carpet premiere of The Twilight Saga: Eclipse among other World Premiers. [13]

Microsoft Theater and The Novo

Microsoft Theater (previously the Nokia Theatre before June 2015 [14]) is a music and theatre venue seating 7,100, and The Novo (previous Club Nokia) is a smaller venue with a seating capacity of 2,300 for live music and cultural events. [5] [15] The theatre has hosted the ESPY Awards since 2008. The first scheduled event held at Microsoft Theatre was a concert featuring The Eagles and The Dixie Chicks on October 18, 2007. [15] National events hosted since have included the American Music Awards on November 18, 2007. [15] The venue has also hosted the finale of the seventh, eighth and ninth seasons of American Idol on May 21, 2008, May 20, 2009, and May 25, 2010, respectively. Recording artist John Mayer's live album Where the Light Is: John Mayer Live in Los Angeles was recorded at the Microsoft Theatre. On March 11, 2008, the Academy of Television Arts and Sciences announced with AEG that the venue would be the home to the Primetime Emmy Awards ceremony from 2008 until at least 2018. [16] The 2010 MTV Video Music Awards were held at Microsoft Theater on September 12, 2010. 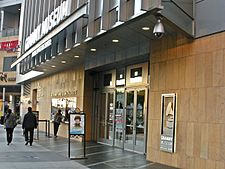 On May 8, 2007, it was announced that the National Academy of Recording Arts and Sciences would establish a museum dedicated to the history of the Grammy Awards. [17] The museum opened on December 2008 for the Grammy Awards 50th anniversary. It consists of four floors with historical music artifacts. [18] [19] It has featured a number of exhibits, including the John Lennon Songwriter Exhibit, which was open from October 4, 2010 to March 31, 2011. Embedded on the sidewalks at the LA Live streets are bronze disks, similar to the Hollywood Walk of Fame, honoring each year's top winners, Record of the Year, Best New Artist, Album of the Year, and Song of the Year. 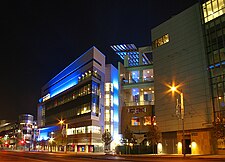 The centerpiece of the district is a 54-story, 1,001-room two-hotel hybrid tower, constructed above the parking lot directly north of the Staples Center. [5] Designed by Gensler and built by Webcor Builders, the skyscraper contains both an 879-room JW Marriott hotel on floors 3 through 21 and a 123-room Ritz-Carlton hotel on floors 22 through 26. Floors 27 through 52 hold 224 Residences at the Ritz Carlton condominiums. [20] The tower's architectural design evolves from a "geometric pattern of glittering, blue-tinted glass." [21] Thirty-four different types of glass were installed to create the uniquely patterned facade. [22] Groundbreaking for the tower took place in June 2007. [20] The project was completed in the first quarter of 2010.

In July 2014, Marriott Hotels opened a second two-hotel hybrid tower with 393 rooms just north across Olympic Boulevard with a Marriott Courtyard and a Residence Inn. [23] The project was built using funds from the EB-5 visa program. [24]

In March 2015, AEG announced that they would add 755 rooms to the J.W. Marriott by constructing a high-rise on the north side of Olympic next to the Marriott Courtyard and Residence Inn building. The new building would be connected by a bridge over the roadway and when completed, the J.W. Marriott would be the second-largest hotel in California with 1,756 rooms. [25]

The second phase of development included a 12,300-square-foot (1,140 m2) ESPN broadcasting studio, as well as an ESPN Zone restaurant built on the corner of Figueroa Street and Chick Hearn Court. In an effort to expand coverage of West Coast sports, ESPN began broadcasting the 1 AM ET (10 PM PT) edition of SportsCenter from the studio on April 6, 2009. [26] [27] [28] The ESPN Zone restaurant closed in July 2013 and was replaced by Tom's Urban 24, Smashburger and Live Basil Pizza restaurants. [29]

The $100 million, 140,000 square foot (13,000 m2), Regal Entertainment Group movie complex opened in 2009 and includes 14 screens and 3,772 seats. [30] It includes a three-story art-deco-style atrium and an 806-seat theater called the "Regal Premiere House" intended for "lucrative" premieres. [30] The theater complex became the West Coast flagship location for Regal, at the time of its opening, the largest theater chain in the United States. [30] The Michael Jackson film This Is It was the opening film at the theater. [30]