The tower, developed by Extell Development Company and designed by Christian de Portzamparc, was the first ultra-luxury condominium tower along the stretch of 57th Street that was subsequently named Billionaires' Row. [11] Upon completion in 2014, it was the tallest residential building in the city for a few months until the completion of 432 Park Avenue.

Extell Development Company’s founder and President, Gary Barnett, spent 15 years assembling the property and air rights on 57th Street. At first, he said he wanted to build a 300,000-square-foot (28,000 m2) building, but plans for views of Central Park took shape as the assemblage got larger and markets started rising to new levels. [12] [13] Foundation work started in January 2010.

Extell received a $700 million construction loan for the project in October 2011 from a Bank of America-led syndicate that included Banco Santander, Abu Dhabi International Bank and Capital One. [14] Sales at the project officially launched in December. [15]

After the sales offices had been open for six months, Extell announced One57 was 50% sold with $1 billion in transactions by May 2012. [16] 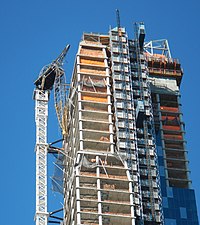 In October 2012, entrepreneur Michael Hirtenstein and One57 developer Gary Barnett had a public clash regarding a unit Hirtenstein agreed to purchase in the building. Hirtenstein claimed he would not spend $16 million for a unit without seeing it, and that the view from the unit he purchased was obstructed. Barnett has been strict about not permitting buyers to view apartments prior to purchase, and as Hirtenstein paid a construction worker to show him his unit, Barnett refunded Hirtenstein's funds and canceled the contract. [20]

On October 29, 2012, during Hurricane Sandy, the construction crane on the building partially collapsed, causing thousands of residents and hotel guests in the neighborhood to be evacuated for six days. [21] [22] [23] By November 5, the crane was secured and through traffic in the surrounding area was allowed.

In response to the crane collapse, a class action lawsuit was filed by dentists in the surrounding area, complaining that the incident caused them to evacuate their offices, with subsequent loss of income. [24] The New York City Department of Buildings also stated they had received multiple complaints about the work site. [25] However, the crane was inspected a week earlier and considered in good shape. City officials called the failure of the boom a freakish occurrence. [26]

In May 2013, Extell announced plans to hoist a new crane on May 10–11. The plans endorsed by the New York City Buildings Department involved a mandatory evacuation of the neighboring Alwyn Court as well as the Briarcliff Apartment Building during the process. The residents of the building would each receive up to $1,500. [27] [28] The coop board at Alwyn Court announced that it would seek a court order against the forced evacuation, saying the Department of Buildings appeared to be "an arm of the developer". The crane was hoisted on May 11 as planned after Extell and Alwyn signed an undisclosed agreement. [29] Its tasks completed, the replacement crane was removed on November 11, 2013. [30]

On the evening of March 15, 2014, a fire broke out in the loading dock of One57, spreading into the courtyard behind the building and then onto the adjacent property at 152 West 58th Street, which was consequently evacuated. [31] Neither Extell nor Lend Lease has ever offered any explanation of the fire, and the New York City Department of Buildings did not issue a partial Stop Work order following the fire. The cause of the fire remains a mystery. [32]

The use of dark and light glass on the building’s exterior creates vertical stripes, while also manipulating sunlight and maximizing views. [33] The tower is characterized by its rippled canopies and numerous setbacks on 57th Street, its mottled fenestration, curved tops, scoops and accentuated verticality. [34]

In February 2018, it was reported that Michael Dell had paid $100.5 million for the penthouse in 2014, setting the record for the most expensive home ever sold in the city. [38] The sale had been reported previously, but the buyer's identity had initially been kept secret. [39] The record was broken in January 2019 when Ken Griffin paid $238 million for a unit at 220 Central Park South. [40]

The building also set the record for the second-most expensive sale in New York City with a 75th floor duplex purchased by hedge fund manager Bill Ackman for $91.5 million. [41] Other units have reportedly been purchased by billionaires Lawrence Stroll, Silas Chou, and Liu Yiqian. [42] [43]

One57 was named "Worst Building of the Year" in 2014 by Curbed.com, whose review said, "Pretty much everyone (or at least most archicritics) agrees that its wavy blue facade is ugly. Justin Davidson of New York magazine called it "clumsily gaudy". James Russell, formerly of Bloomberg ... lamented the "endless acres of cheap-looking frameless glass in cartoonish stripes and blotches of silver and pewter". Michael Kimmelman of the Times had similarly harsh words: "[The building] unravels as a cascade of clunky curves ... chintzily [ sic] embellished, clad in acres of eye-shadow-blue glass offset by a pox of tinted panes, like age spots." [44]