From Wikipedia, the free encyclopedia
For the telecommunications building at the intersection of Wilshire Boulevard and South Grand Avenue, see One Wilshire.
‹ The template Infobox building is being considered for merging. ›

Wilshire Grand Center is a 1,100-foot (335.3 m) skyscraper in the Financial District of Downtown Los Angeles, California, occupying the entire city block between Wilshire Blvd. and 7th, Figueroa, and Francisco streets. It is the tallest building in Los Angeles, the tallest building in California, the tallest building west of the Mississippi River and outside of New York City, Chicago, and Philadelphia, and the 14th tallest building in the United States. Its height surpasses the U.S. Bank Tower by 82 ft (25 m). [8] The building is part of a mixed-use hotel, retail, observation decks, shopping mall, and office complex, expected to revitalize downtown Los Angeles and the area surrounding the building. [6] The development of the complex is estimated to cost $1.2 billion. [9] [10] The plans include 67,000 square feet (6,225 m2) of retail, 677,000 square feet (62,895 m2) of Class A office space and 900 hotel rooms. InterContinental is the tower's hotel component, comprising 900 rooms and suites. [6] 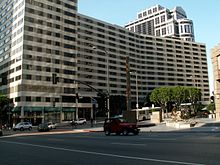 The original Wilshire Grand Hotel opened in 1952 as the Hotel Statler, on the site of the new Wilshire Grand. In 1950, the city of Los Angeles issued the largest single building permit at the time for the construction of the hotel, which cost over $15 million. The hotel quickly became a landmark of downtown Los Angeles,[ citation needed] and over its 59-year lifespan attracted famous guests including President John F. Kennedy and Pope John Paul II.

Seeking to revive the Wilshire Grand as a landmark and icon of Los Angeles, Chairman and CEO Cho Yang-ho of Korean Air conceived the idea of developing a new complex which would include the tallest building in Los Angeles, at 1,099 feet (335 m). It is also part of an urban development effort to revitalize the Figueroa Street corridor of downtown Los Angeles as a vibrant light-and-sign district, similar to New York's Times Square. Deconstruction of the original building began on October 23, 2012, and continued for over a year until November 21, 2013, when a bottoming-out ceremony was held in the 106-foot pit (32 m) in which the tower will stand, officially ending the deconstruction of the former hotel. [12] [13]

Originally envisioned as two towers, the taller of which would have been 1,250 feet (380 m) tall, the complex is now a single 1,100-foot (335 m), 73-story tower consisting of a mixed-use 889-room hotel, retail, observation deck and office space. The Los Angeles–based architectural firm, A.C. Martin Partners, oversaw the project and prepared the current design. They took over from Thomas Properties, which managed the early proposals, but which was replaced when the owners became dissatisfied with their approach. [14] A distinctive feature of the building is its sail-shaped crown which is illuminated with LED lighting at night. [15] [16] The tower will spearhead part of a new planned light and sign district that will extend along the Figueroa Corridor down to L.A. Live. According to recent renderings, it is unclear however to what extent LED lighting and advertising will be applied. [10] Lead designer David C. Martin said that the spire and the entire exterior skin of the tower will be filled with programmable LED lighting. [17] The spire weighs 200,000 pounds (91,000 kg) and adds 294 feet (90 m) in height to the building. [18]

The skyscraper is a distinctive part of the Los Angeles skyline, as it is the first building over 75 feet tall built since 1974 to not feature a "flat roof" design, an integral part of buildings in Los Angeles today. [19] The pattern of buildings in Los Angeles to feature these "flat roofs" was the result of a 1974 fire ordinance which required all tall buildings in the city to include rooftop helipads in response to the devastating 1974 Joelma Fire in São Paulo, Brazil, in which helicopters could not be used to effect rescues from the rooftop of the building because of the lack of a landing spot, and could otherwise have prevented many deaths. [20] The Wilshire Grand was granted an exception by the Los Angeles City Fire Department however, as the building will include advances in fire safety and building technology (such as a reinforced concrete central core) which would exceed the city's current fire code.

The elevators in Wilshire Grand Center are supplied by Otis Elevator Company. The four double-deck express cars servicing the hotel's main lobby on the 70th floor are the second fastest in North America, traveling at 9 meters per second (1800 feet per minute). [21] 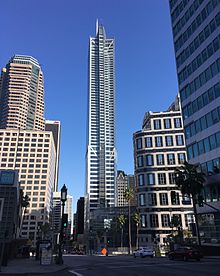 Turner Construction received the contracts for both the demolition of the former hotel and the construction of the new tower, the latter of which began on February 15, 2014, when 21,600 cubic yards (16,500 m3) of concrete was poured over the course of 20 hours, creating an 18-foot-thick (5 m) foundation for what will be the tallest building west of the Mississippi. [5] Land use entitlements and construction staking services were provided by Psomas. [22]

The foundation is set on bedrock known as the Fernando Formation; this siltstone has been compressed by an ocean that formerly covered the area and is a good base for a building. [14]

On March 17, 2016, a construction worker died by suicide after jumping from the 53rd floor, landing on a vehicle below. [26]

The building, while recognized as "tallest" in the city by the Council on Tall Buildings and Urban Habitat, achieves this recognition through the height of its decorative sail and spire rather than highest occupiable floor space. From the ground, due to local topography, the Wilshire Grand sits visibly lower than other surrounding buildings. From the vantage of the building's 73rd floor observation deck, the US Bank Tower is markedly higher in elevation, and remains downtown Los Angeles' most prominent visual landmark. [28]