From Wikipedia, the free encyclopedia
This article is about The New York Times headquarters building since 2007. For other uses, see New York Times Building (disambiguation).
Office skyscraper in Manhattan, New York

The building was erected from 2003 to 2007 as the Times' headquarters at a cost of $850 million. The structure was designed by Renzo Piano Building Workshop in association with FXFOWLE Architects. Construction was undertaken by a joint venture of The New York Times Company, Forest City Ratner ( Forest City Enterprises's New York subsidiary), and ING Real Estate. As of 2018 [update], The New York Times Building is tied with the Chrysler Building as the eleventh-tallest building in the city. 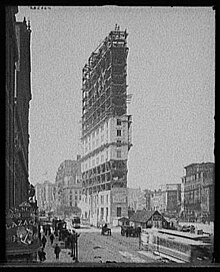 Image of building taken in 1904

The original newspaper headquarters in 1851 were at 113 Nassau Street, then a few years later at 138 Nassau Street. In 1858, the Times moved to a five-story edifice at 41 Park Row; thirty years later, partially in response to a new tower erected by the competing New-York Tribune, it commissioned a new 13-story building at the same site, one that remains in use by Pace University with some modifications. [4]

In 1904, again partially in response to the Herald Square headquarters of the New York Herald, the paper moved to perhaps its most famous location, the Times Tower, on the site of the Pabst Hotel. The name of the surrounding area changed from Longacre Square to Times Square. The paper outgrew the slender tower within a decade and, in 1913, moved into the Times Annex at 229 West 43rd Street, where it remained for almost a century. [4]

Height comparison of New York City buildings, with the New York Times Building on the right

The project was announced on December 13, 2001, as a 52-story tower on the east side of Eighth Avenue between 40th and 41st Street across from the Port Authority of New York & New Jersey Bus Terminal. The project, in conjunction with the Hearst Tower, represented the further westward expansion of Midtown along Eighth Avenue, a corridor that had seen no construction since the 1989 completion of One Worldwide Plaza. The new building—called by many New Yorkers "The New Times Tower"—also kept the paper in the Times Square area, its namesake.

The site for the building was obtained by the Empire State Development Corporation (ESDC) through eminent domain. With a mandate to acquire and redevelop blighted properties in Times Square, ten buildings were condemned by the ESDC and purchased from their owners. Some owners sued, asserting that the area was no longer blighted, but lost in court. [5] [6] Once the 80,000-square-foot (7,400 m2) site was assembled, it was leased to The New York Times Company and Forest City Ratner for $85.6 million over 99 years (considerably below market value). [7] Additionally, The New York Times Company received $26.1 million in tax breaks. [7]

The tower was designed by Renzo Piano Building Workshop and FXFOWLE Architects, with Gensler providing interior design. The lighting design for the building's nighttime identity was designed by the Office for Visual Interaction Inc. The tower rises 748 feet (228 m) from the street to its roof, with the exterior curtain wall extending 92 feet (28 m) higher to 840 feet (256 m), and a mast rising to 1,046 feet (318.8 m). [1] [3] As of 2018 [update], The New York Times Building is the eleventh-tallest building in the city, tied with the Chrysler Building. [15]

The steel-framed building, cruciform in plan, has a screen of ​1 5⁄8" (41.3 mm) ceramic rods mounted on the exterior of the glass curtain wall on the east, west and south facades. The rod spacing increases from the base to the top, adding transparency as the building rises. The steel framing and bracing is exposed at the four corner "notches" of the building. [16]

The use of floor-to-ceiling glass maximizes light and views for people inside and outside the building. The horizontal white ceramic rods on the building facade, which are spaced to allow occupants to have unobstructed views while both seated and standing, act as an aesthetic veil and a sun shade. They are made of aluminum silicate, an extremely dense and high-quality ceramic chosen for its durability and cost-effectiveness. Glazed with a finish similar to the material used on terracotta to reflect light, self-clean, and resist weather, the rods change color with the sun and weather. Additionally, the automated louver shades move in response to the position of the sun and inputs from sensors, blocking light to reduce glare or allowing it to enter at times of less direct sunlight. The movable shades reduce energy consumption about 13% by reducing solar heat gain by 30%. [17] [18]

In a normal office building, lights usually consume about 44% of total energy. The New York Times Building uses less, because its design, lighting, and shading systems allow the sun to be the main source of light. Each of the more than 18,000 electrical ballasts in the lighting system contains a computer chip, allowing each room's lights to brighten or dim depending on whether a room is occupied and how bright the sun is. [19]

The New York Times Company utilizes an underfloor air distribution system (UFAD) which strives for better indoor air quality, thermal comfort as well as energy saving. The conditioned air from the air handler is delivered through an air highway system that circumnavigates the service core and then into the six zoned off underfloor low pressure zones for distribution across the floor plate to all floor diffusers. Around each perimeter a series of fan power boxes control the temperature in the space. If heating is required then the fans turn on delivering heat via a hot water coil. In cooling mode, the fans operate to give increased ventilation around the perimeter spaces. Fresh air is supplied by two air handling units on the 28th floor sending fresh treated outside air to each floor where a constant volume VAV controls the amount of air entering the system. The air is then conditioned for proper cooling and humidity before being sent to the air highway. The New York Times Building also benefits from other general UFAD advantages. In the open plan office space that was implemented in occupied space from 2nd to 21st floors to enhance daylighting and outdoor views, the system provides flexibility to place the required equipment anywhere on the raised integrated service plenum. When departments or occupants needed to be reconfigured, the raised floor also enables maintenance to carry out changes at relatively lower expense. [20] [21]

The New York Times Building incorporates a cogeneration plant to supply its 24-7 operation and 40% of the power used. Located in a mechanical room at the far end of the podium's top floor, the plant consists of two natural gas fired reciprocating engine driven generators with a total generating capacity of 1.5 MW of electrical power. It recovers the heat produced by combustion and converts the heat into usable energy in the form of hot water. The recovered hot water serves as the building's heating loop to provide warmth during the winter and functions as a refrigeration machine to provide cooling during the summer. The power from the grid is solely used by the building as a backup source. [18]

In excess of 95% of the structural steel was recycled. The building, like many in Midtown Manhattan, has no on-site parking, with most employees arriving by public transit (the New York City Subway's Times Square station and the Port Authority Bus Terminal are in the immediate vicinity). [22]

A team of researchers at the Lawrence Berkeley National Lab and Center for the Built Environment monitored the building's performance for a year and compared the results with buildings that meet with the standard building efficiency codes. They found that the New York Times Building significantly reduced annual electricity, cut heating energy use by more than 50% and decrease the peak electric demand as well. "It is essential to start with a sound, integrated building design, and then to pay attention to details such as procurement of building equipment, and verifying the proper performance of the equipment after it is installed. The Times Company did its homework in 2004, well before construction began on the building, evaluating and optimizing the shading and daylighting technologies," concluded the Berkeley researchers. [20] [23]

In mid-2008, three men illegally climbed the external facade of The New York Times Building within a month of each other, the first two on the same day; the three climbers were not associated with one another. [24] On June 5, 2008, professional climber Alain Robert, dubbed "The French Spiderman", climbed the north side of The New York Times Building. He was able to scale the building from first floor all the way to the roof. During his climb, Robert attached a fluorescent green neon sign to the building that read "Global warming kills more people than a 9/11 every week". Robert also wore a t-shirt promoting the website "The Solution is Simple". Robert was met on the roof by the NYPD emergency service unit team where he was put in a harness to ensure he did not fall and placed under arrest. [25] [26] Later that day, a second climber scaled the western face of the building. [27] [26] He also was arrested for climbing the building facade after reaching the roof. The climber, 32-year-old Brooklyn resident Renaldo Clarke, was wearing a T-shirt with the words "Malaria No More" written on it. [28]

The third climber in mid-2008 was David Malone, 29, from Connecticut, who also scaled the west side of the building on July 9, 2008. Unlike the two previous climbers, Malone did not attempt to make it to the roof. He hung a banner around the fifth floor upon the first "T" of The New York Times sign, that had a picture of Osama Bin Laden holding Bush like a puppet—"Bin Laden's Plan" (the title of his book and website). He then climbed higher, stopping at the 11th floor, and remained hanging on the building for four hours before being arrested. Malone said he was protesting Al Qaeda's "crusader baiting", and "intentional provocation of the U.S." [29]

On March 24, 2012, a homeless man was caught climbing the building. He made it to the 5th floor before getting stuck, and was eventually arrested. [30]