The El Pueblo de Los Ángeles Historical Monument, also known as Los Angeles Plaza Historic District and formerly known as El Pueblo de Los Ángeles State Historic Park, is a historic district taking in the oldest section of Los Angeles, known for many years as El Pueblo de Nuestra Señora la Reina de los Ángeles del Río de Porciúncula. The district, centered on the old plaza, was the city's center under Spanish (1781–1821), Mexican (1821–1847), and United States (after 1847) rule through most of the 19th century. The 44-acre park area was designated a state historic monument in 1953 and listed on the National Register of Historic Places in 1972.

Founding of the Pueblo

A plaque across from the Old Plaza commemorates the founding of the city. It states: "On September 4, 1781, eleven families of pobladores (44 persons including children) arrived at this place from the Gulf of California to establish a pueblo which was to become the City of Los Angeles. This colonization ordered by King Carlos III was carried out under the direction of Governor Felipe de Neve." The small town received the name El Pueblo de Nuestra Señora Reina de los Ángeles sobre El Río Porciúncula, Spanish for The Town of Our Lady Queen of the Angels on the Porciúncula River.

Growth of the Pueblo

During its first 70 years, the Pueblo grew slowly from 44 in 1781 to 1,615 in 1850—an average of about 25 persons per year. During this period, the Plaza Historic District was the Pueblo's commercial and social center.

In 1891, the Los Angeles Times reported on the shifting city center:

The geographical center of Los Angeles is the old plaza, but that has long since ceased to be the center of population. ... While at one time most of the population was north of the plaza, during the past ten years 90 per cent of the improvements have gone up in the southern half of the city. ... These are solid facts which it is useless to attempt to ignore by playing the ostrich acts and level-headed property holders in the northern part of the city are beginning to ask themselves seriously what is to be done to arrest or at least delay the steady march of the business section from the old to the new plaza on Sixth Street ... [3]

Preservation as a historic park 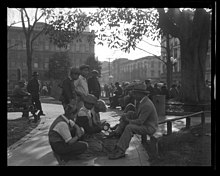 The 44 acres (180,000 m2) surrounding the Plaza and constituting the old pueblo have been preserved as a historic park roughly bounded by Spring, Macy, Alameda and Arcadia streets, and Cesar Chavez Boulevard (formerly Sunset Boulevard). There is a visitors center in the Sepúlveda House. A volunteer organization known as Las Angelitas del Pueblo provides tours of the district.

The district includes the city's oldest historic structures clustered around the old plaza. The buildings of historical significance include Nuestra Señora La Reina de Los Ángeles Church (1822), Avila Adobe (1818) (the city's oldest surviving residence), the Olvera Street market, Pico House (1870), and the Old Plaza Fire Station (1884). Four of the buildings have been restored and are operated as museums. [4]

In addition, archaeological excavations in the Pueblo have uncovered artifacts from the long indigenous period before European contact and colonization. These include animal bones, household goods, tools, bottles, and ceramics. [4]

The district was designated as a state monument in 1953, [5] and listed on the National Register of Historic Places in 1972. These steps, however, did not prevent the demolition, in the decades to come, of numerous historic and very old buildings, particularly those that once formed the eastern edge of the Plaza. 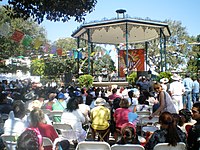 Musicians performing at the Plaza

At the center of the Historic District is the plaza . It was described in 1982 as "the focal point" of the state historic park, symbolizing the city's birthplace and "separating Olvera Street's touristy bustle from the Pico-Garnier block's empty buildings." [6] Built in the 1820s, the plaza was the city's commercial and social center. It remains the site of many festivals and celebrations. The plaza has large statues of three important figures in the city's history: King Carlos III of Spain, the monarch who ordered the founding of the Pueblo de Los Ángeles in 1780; Felipe de Neve, the Spanish Governor of the Californias who selected the site of the Pueblo and laid out the town; and Junípero Serra, founder and first head of the Alta California missions. In addition to this, the plaza is dedicated to commemorating the original forty-four settlers (Los Pobladores), and the four soldiers who accompanied them. A large plaque listing their names was erected in the plaza, and later plaques dedicated to the individual eleven families were placed in the ground encircling the gazebo in the center of the plaza.

The parish church in the Plaza Historic District, known as La Iglesia de Nuestra Señora la Reina de Los Ángeles (The Church of Our Lady the Queen of the Angels), was founded in 1814. The structure was completed and dedicated in 1822. The present church, which replaced it, was built in 1861. [7] The church was one of the first three sites designated as Historic Cultural Monuments by the City of Los Angeles, [8] and has also been designated as a California Historical Landmark. [9] 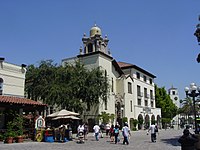 Olvera Street, known for its Mexican marketplace, was originally known as Wine Street. In 1877, it was extended and renamed in honor of Augustín Olvera, a prominent local judge. Many of the Plaza District's contributing historic buildings, including the Avila Adobe and Sepulveda House, are located on Olvera Street. In 1930, it was adapted by local merchants into the colorful marketplace that operates today.

The mural América Tropical (full name: América Tropical: Oprimida y Destrozada por los Imperialismos, or Tropical America: Oppressed and Destroyed by Imperialism, [10]) by David Siqueiros, was unveiled above the street in 1932. It was soon covered up to mask its political content. The Getty Conservation Institute has performed detailed conservation work on the mural to restore it and the America Tropical Interpretive Center opened to provide public access. [11]

The Avila Adobe was built in 1818 and is the oldest surviving residence in Los Angeles. It is located in the paseo of Olvera Street and was built by Francisco Ávila, a wealthy cattle rancher. Its adobe walls are 2½ to 3 feet (0.91 m) thick. U. S. Navy Commodore Robert Stockton took it over as his temporary headquarters when the United States first occupied the city in 1846. Listed on the National Register of Historic Places, the adobe is also designated as California State Landmark No. 145.

The Plaza Substation was part of the electric streetcar system operated by the Los Angeles Railway. Completed in 1904, the substation provided electricity to power the yellow streetcars. When the streetcar system closed in the 1940s, the building was converted to other uses. The substation is one of the two buildings in the district that is separately listed in the National Register of Historic Places. (The Avila Adobe is the other.) 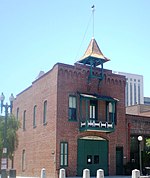 The Old Plaza Firehouse is the oldest firehouse in Los Angeles. Built in 1884, it operated as a firehouse until 1897. The building was thereafter used as a saloon, cigar store, poolroom, "seedy hotel", Chinese market, "flop house", and drugstore. [12] The building was restored in the 1950s and opened as a firefighting museum in 1960.

Pico House was a luxury hotel built in 1870 by Pío Pico, a successful businessman who was the last Mexican Governor of Alta California. With indoor plumbing, gas-lit chandeliers, a grand double staircase, lace curtains, and a French restaurant, the Italianate three-story, 33-room hotel was the most elegant hotel in Southern California. It had a total of nearly eighty rooms. The Pico House is listed as a California Historical Landmark (No. 159).

The Merced Theater, completed in 1870, was built in an Italianate style and operated as a live theatre from 1871 to 1876. When the Woods Opera House opened nearby in 1876, the Merced ceased being the city's leading theatre. [13] Eventually, it gained an "unenviable reputation" because of "the disreputable dances staged there, and was finally closed by the authorities." [14]

Masonic Hall was built in 1858 as Lodge 42 of the Free and Accepted Masons. The building was a painted brick structure with a symbolic "Masonic eye" below the parapet. In 1868, the Masons moved to larger quarters further south. Afterward, the building was used for many purposes, including a pawn shop and boarding house. It is the oldest building in Los Angeles south of the Plaza.

Pelanconi House, built in the 1850s, is the oldest surviving brick house in Los Angeles. [15] In 1924, it was converted into a restaurant called La Golondrina, which is the oldest restaurant on Olvera Street. [16]

Built in 1926, the Plaza Methodist Church was built on the site of the adobe once owned by Agustín Olvera, the man for whom Olvera Street was named.

The Pueblo de Los Ángeles was the final destination of the Old Spanish Trail. It is a site on the Old Spanish National Historic Trail, which was established in 2002. This historic trail does not yet have designated visitor facilities or services. But museums, historic sites, and markers along the Old Spanish Trail identify sites from Santa Fe to Los Angeles. The popular National Park Passport Stamps program is available at many sites along the trail, including the visitor center of the Avila Adobe.