The A Line (formerly the Blue Line) [4] [5] is a 22.0-mile (35.4 km) light rail line running north–south between Los Angeles and Long Beach, California, passing through Downtown Los Angeles, South Los Angeles, Watts, Willowbrook, Compton, Rancho Dominguez, and Long Beach in Los Angeles County. It is one of six lines in the Metro Rail system. Opened in 1990, it is the system's oldest and third-busiest line with an estimated 22.38 million boardings per year as of December 2017 [update]. It is operated by the Los Angeles County Metropolitan Transportation Authority. [6]

The A Line passes near the cities of Vernon, Huntington Park, South Gate, Lynwood, and Carson. The famous Watts Towers art installation is visible from the train tracks near 103rd Street station. The under-construction Regional Connector will directly link this line to Union Station and into the San Gabriel Valley along the current route of the L Line.

Map of the A Line, including the under-construction 2021 Regional Connector extension. Dashed lines indicate Metro routes planned or under construction.

The line's northern terminus is the underground 7th Street/Metro Center station, after rising to street level, trains run south along Flower Street, sharing tracks with the E Line. Passengers can connect to the bus rapid transit J Line at 7th Street/Metro Center, Pico, and Grand stations. The A and E Lines diverge at Flower Street and Washington Boulevard just south of downtown Los Angeles. Here the A Line turns east on Washington Boulevard before turning south on Long Beach Avenue where it enters the former Pacific Electric right-of-way. This historic rail corridor has four tracks, with two used by Metro Rail trains and two by freight trains. There are some elevated sections as this private right of way cuts through more densely populated areas. Passengers can connect with the C Line at the Willowbrook station. Just south of Willow station, A Line trains exit the rail corridor and follow Long Beach Boulevard into the city of Long Beach, where trains travel through the Long Beach Transit Mall while making a loop using 1st Street, Pacific Avenue and 8th Street.

Of note, some trains operate at later or earlier times due to the A Line making the turnaround in Downtown Long Beach.

Originally[ when?] during peak hours, every other train served only the stations between Willow and 7th Street/Metro Center to decrease the headway on that portion of the route. Willow was chosen because of its proximity to the storage yard and because it was the last southbound station with a park-and-ride lot. In the evening rush hour, riders saw some trains destined to "Willow" and others to "Long Beach". Consequently, those riders destined to Long Beach had to exit at Willow Station and wait for the next train, which would terminate at the Downtown Long Beach Station. This was discontinued after the New Blue Improvements Project was completed in 2019, with all trains now serving the full route from end to end. [9]

When the line began operation in 1990, it was projected to have a daily ridership of 5,000. [10] However, it performed much better than expected, with daily ridership reaching 12,000 passengers within the first months of service and reaching 32,000 by the end of the first year of service. [10] 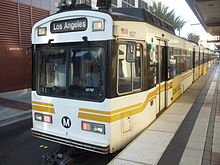 Much of the current A Line follows the route of the Pacific Electric Railway's Long Beach streetcar service; service on the route ended in 1961. The line initially opened as the Blue Line on Saturday, July 14, 1990, at a cost of US$877 million, [2] and ran from Willow to Pico. In 1991, it was extended south to Downtown Long Beach and north to 7th St/Metro Center.

A mass transit extension to Pasadena was originally conceived as the "Red Line Eastside extension" and as the "Pasadena Blue Line." However, in 1998, voters passed a ballot measure which banned the use of sales tax revenue for subway projects. [11] As a result, the proposed extension opened as the Gold Line in 2003.

From 1999 to 2001, the Blue Line underwent a US$11 million project to lengthen 19 of its platforms so that they could accommodate three-car trains. [12]

In 2014, Metro announced the "New Blue Improvements Project" to renovate and modernize the system. In 2019, half the line was closed for five months each (10 months in total), with Metro providing bus shuttle service to compensate for the lack of rail service. Metro officially reopened the line on November 2, 2019, rebranding it as the A Line. [4] [5] [13]

Metro is currently constructing the Regional Connector, a light rail subway tunnel in Downtown Los Angeles that will connect the A and E Lines to the L Line and allow a seamless "one-seat ride" between the A and E Lines' current terminus at 7th Street/Metro Center and Union Station. When this project is completed, the A, E, and L Lines will be simplified into the following configuration: [14]

The groundbreaking for the construction of the Regional Connector Transit Corridor took place on September 30, 2014, and it is expected to be in public service in 2022.

The Gold Line Foothill Extension is the ongoing second phase of the original Gold Line; it aims to extend service to the "Foothill Cities" and into San Bernardino County. The next segment to Pomona is expected to open in 2025, by which time the A Line will have been routed through the Regional Connector to serve the new terminus. 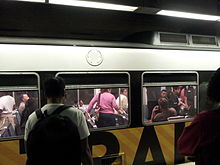 The line often operates at capacity, and various options to increase capacity have been considered, such as four-car trains or more frequent trains. Both have problems: it would be difficult or impossible to lengthen some of the station platforms, and the number of trains already causes delays for other vehicles at level crossings. Thus it may not be possible to increase A Line ridership without an extremely expensive grade-separation project, either by elevation, by an entrenchment method similar to that used by the nearby Alameda Corridor freight rail "expressway", or by building another parallel transit corridor to relieve capacity strains from the A Line. When the Regional Connector project linking A and E Line tracks with the L Line tracks in Little Tokyo is completed, this may result in even more capacity problems, with ridership expected to grow even more once the connector is open for service. 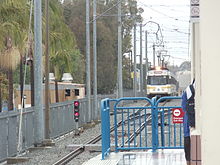 A Metro A Line train heading to Long Beach arrives at Willow Station.

Over 120 motorists and pedestrians have been killed at A Line level crossings since 1990 and there have been more than 800 collisions, [17] [18] making the line easily the country's deadliest and most collision-prone rail line. [19] 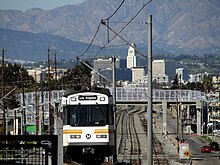 Train at the Slauson station

In 1998, the MTA commissioned Booz Allen Hamilton, Inc. to evaluate the cause of Blue Line collisions and recommend affordable solutions. The study reported the high ridership (over 70,000 per day) was a contributor:

"The MBL has one of the highest ridership counts for light rail lines in the Country. This factor is perhaps the most important contributor to the grade crossing accident rate. The high ridership results in increased pedestrian traffic near stations as compared to other light rail systems. In addition, although MTA Operations does not allow high passenger loads dictate safe operations, there is pressure to maintain travel times and headway schedule requirements (e.g., passenger trip from Los Angeles to Long Beach in less than one hour)."

Other contributing factors identified were the high population density leading to more pedestrian and vehicular traffic around the tracks, diverse varied socio-economic community around the line that creates literacy and language difficulties for public education campaigns, driver frustration due to the slow traffic speeds around the line that leads to more risk taking behavior, and the shared right-of-way with freight traffic in the fastest running section from Washington station to Willow station, where trains operate at a maximum of 55 mph (89 km/h) between stations.

The collision rate has declined somewhat following the installation of four-quadrant gates at some crossings where the A Line shares the right-of-way with freight rail between Willowbrook station and Artesia station. The gates prevent drivers from going around lowered gates. In addition, cameras along some problem intersections issue traffic tickets when drivers go around gates.

The following is the complete list of stations, from north to south.

On Metro Rail Operations' internal timetables, the A Line is called line 801.

The A Line is operated out of the Division 11 Yard (208th Street Yard) located at 4170 East 208th Street. This yard stores the fleet used on the A Line. It is also where heavy maintenance is done on the fleet. The Yard is located between Del Amo and Wardlow stations. Trains get to this yard via a wye junction on the southbound tracks. Northbound trains can enter and exit the yard via the cross tracks on the north and south side of the junction. 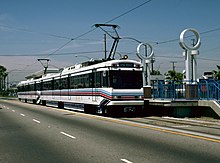 The A Line uses three different types of rolling stock from Nippon Sharyo, Siemens, and Kinkisharyo.

In 2012, Metro transferred some Siemens P2000 light rail vehicles from the Gold Line to the Blue Line fleet.

A Line vehicles are maintained and stored at the Division 11 yard in Long Beach between Del Amo and Wardlow stations. This facility has capacity for storing and maintaining 86 light rail cars.