Originally the entire airport was within the Burbank city limits, but the north end of Runway 15/33 has been extended into the city of Los Angeles. The airport is owned by the Burbank–Glendale–Pasadena Airport Authority and controlled by the governments of those cities. The Airport Authority contracts with TBI Airport Management, Inc., to operate the airport, which has its own police and fire departments, the Burbank-Glendale-Pasadena Airport Authority Police. Boarding uses portable boarding steps or ramps rather than jet bridges. The Federal Aviation Administration (FAA) National Plan of Integrated Airport Systems for 2017–2021 categorized it as a medium-hub primary commercial service facility. [5]

United Aircraft and Transport Corporation (UA&T) was a holding company created in 1928 that included Boeing Aircraft and United Air Lines, itself a holding company for a collection of small airlines that continued to operate under their own names. One of these airlines was Pacific Air Transport (PAT), which Boeing had acquired because of PAT's west coast mail contract in January 1928. [8] UA&T sought a site for a new airport for PAT and found one in Burbank. UA&T had the benefit of surveys that the Aeronautics Department of the Los Angeles Chamber of Commerce had conducted starting in 1926 to identify potential airport sites. [9]

It took UA&T a year and the cooperation of the city to assemble the site. [10] The 234-acre (0.95 km2) site was rife with vines and trees and the ground had to be filled and leveled, but it had good drainage, a firm landing surface, steady winds, and good access to ground transport. [11] Construction was completed in just seven months. In an age when few aircraft had brakes and many had a tail skid instead of a wheel, runways were not usually paved; those at Burbank had a 5-inch-thick (130 mm) mixture of oil and sand. There were no taxi strips, but the designers left room for them. Two of the runways were over 3,600 feet (1,100 m) long; a third was 2,900 feet (880 m); all were 300 feet (91 m) wide. Generous dimensions, and the site had room for expansion. [12]

United Airport was dedicated amid much festivity (including an air show) on Memorial Day weekend (May 30 – June 1), 1930. The airport and its handsome Spanish Revival-style terminal was a showy competitor to nearby Grand Central Airport in Glendale, which was then Los Angeles' main airline terminal. The new Burbank facility was actually the largest commercial airport in the Los Angeles area until it was eclipsed in 1946 by the Los Angeles Airport in Westchester when that facility (formerly Mines Field, then Los Angeles Municipal Airport) commenced scheduled airline operations.

In March 1939 sixteen airline departures a day were scheduled out of Burbank: eight on United Airlines, five on Western Airlines and three on TWA ( American Airlines' three departures were still at Glendale). [13] Commercial air traffic continued even while Lockheed's extensive factories supplied the war effort and developed military and civil aircraft into the mid-1960s. The April 1957 OAG lists nine weekday departures on Western, six on United, six on Pacific Air Lines, one on TWA and one on American Airlines (a nonstop to Chicago Midway Airport). Pacific Southwest Airlines (PSA) had 48 Douglas DC-4 departures a week to SFO and SAN (PSA did not fly out of LAX until 1958). [14] In 1958, Oakland-based Transocean Air Lines was operating Lockheed Constellation propliner service three times a week nonstop to Honolulu as well as a Constellation flight operated twice a week on a round trip routing of Oakland - Burbank - Chicago Midway Airport - New York Idlewild Airport (now JFK Airport) - Hartford. [15] By the summer of 1962, PSA was operating all of its nonstop flights to San Francisco and San Diego with new Lockheed L-188 Electra turboprop aircraft with a combined total of 32 departures a week from Burbank. [16]

In 1967 Lockheed renamed the facility Hollywood-Burbank Airport. In 1970 Continental Airlines began Boeing 727-200 flights to Portland and Seattle via San Jose and also flew the short hop to Ontario. Continental later offered flights to Chicago via Ontario. Continental went on to serve Denver with nonstop Boeing 727-200s from BUR. Alaska Airlines began serving Burbank in 1981 with Boeing 727-100s and 727-200s flying nonstop and direct to Seattle and Portland, which was Alaska Air's first service to southern California. [17] Aloha Airlines pioneered nonstop jet service from BUR to Hawaii, flying Boeing 737-700s to Honolulu before ceasing all passenger operations.

A 1973 decision by the United States Supreme Court in City of Burbank v. Lockheed Air Terminal, Inc. overturned an airport curfew imposed by the city of Burbank on flights between 11:00 PM and 7:00 AM under the U.S. Constitution's Supremacy Clause on the grounds that airports were subject to federal oversight by the Federal Aviation Administration and under the terms of the Noise Control Act of 1972. [18]

The facility remained Hollywood-Burbank Airport for more than a decade until 1978 when Lockheed sold it to the Burbank–Glendale–Pasadena Airport Authority. The airport then got its fifth name: Burbank–Glendale–Pasadena Airport (1978–2003). On November 6, 2003, the airport authority voted to change the name to Bob Hope Airport in honor of comedian Bob Hope, a longtime resident of nearby Toluca Lake, who had died earlier that year and who had kept his personal airplane at the airfield. [19] The new name was unveiled on December 17, 2003, on the 100th anniversary of the Wright brothers' first flight in 1903, the year that Bob Hope was born.

After much debate between the Airport Authority, the city of Burbank, the Transportation Security Administration, and Burbank residents, in November 2007 it was decided that a new $8-million to $10-million baggage screening facility for Terminal B is legal, considering the anti-growth limitations placed on the airport. The facility will house a $2.5-million explosive detection system, used for the automatic detection of explosives within checked luggage. However, the facility is still in the early planning phases. [20]

On June 27, 2014, a $112 million Regional Transportation Center opened. The 520,000-square-foot center at Hollywood Way and Empire Avenue was also built to withstand a major earthquake while serving as an emergency "nerve center." The industrial-looking hub with a red steel roof will be adorned by 16, three-story art panels. Solar panels generating 1.5 megawatts of energy will also be added to its roof. A nearby parking garage was built to handle more than 1,000 cars, while traffic lights have been reworked around the airport. [21]

There is also a replacement terminal in the works at the airport. A plan to develop a new airport terminal building was unveiled by the Burbank–Glendale–Pasadena Airport Authority in 2013. The replacement terminal would cost a reported $400 million and meet newer seismic standards and be further away from the runway as required by the Federal Aviation Administration. [22] The new location is west of Hollywood Way on undeveloped property that has been used in recent years for parking. The Burbank City Council left it up to voters to decide on the plan. Known as Measure B, the proposal went before Burbank city voters on November 8, 2016, and passed with 69 percent of the voters approving it. [23]

The next step in the terminal replacement process is for the Airport Authority to finalize the new terminal's design, get FAA approval and then secure the required financing from the FAA and other sources. Airport funding sources include FAA grants, parking fees, landing fees charged to airlines, as well as rents from restaurants and other concession businesses operating at the airport. There are also fees charged on airline tickets sold, including passenger facility charges and federal taxes. Once the funding is nailed down, the Airport Authority will bid for the project. The replacement terminal is expected to encompass 355,000 square feet and the same number of gates (14). Also, air travelers will see more restrooms, additional restaurant and concession space, improved security screening areas and other enhanced passenger amenities. 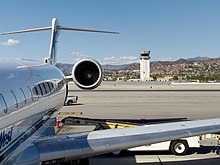 View of tower from open gangway, 2015

Hollywood Burbank Airport has two terminals, "A" and "B", joined together as part of the same building. Terminal A has nine gates numbered A1 to A9 and Terminal B has five gates numbered B1 to B5. 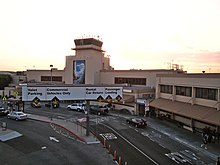 Lyft, Uber, and Wingz all use the passenger drop-off location in front of the main terminal for departing travelers—and arrivals use the adjacent Short Term Parking structure directly opposite the Terminal.

There are two bus stop areas: Hollywood Way-Thornton Avenue (a short walk east of Terminal A) and Empire Avenue/Intermodal, a short walk south of Terminal B next to the train station. All Burbank-bound lines serve the Downtown Burbank Metrolink station.

Bob Hope Airport was initially built for smaller aircraft; as a consequence, the airport has one of the smallest commercially used runways in the United States. The result is a challenging landing for even the most experienced pilots.