From Wikipedia, the free encyclopedia
For other uses, see C Line.

The C Line (formerly the Green Line) is a 20-mile (32 km) [3] light rail line running between Redondo Beach and Norwalk within Los Angeles County. It is one of six lines forming the Los Angeles Metro Rail system, and opened on August 12, 1995. It also serves El Segundo, Hawthorne, South Los Angeles, Lynwood, Downey, Paramount and Willowbrook (in South Los Angeles). A free shuttle bus to Los Angeles International Airport (LAX) is available at the line's Aviation/LAX Station. The line is the only one in the entire Metro Rail system not to serve Downtown Los Angeles but passengers can reach it by connecting with the J Line busway at the Harbor Freeway Station, the A Line light rail at Willowbrook Station, or Metro Express 460 at Norwalk Station. The fully grade-separated route runs mostly in the median of the Century Freeway (Interstate 105), with a separate mostly elevated section to the west.

The Crenshaw/LAX Line project, scheduled to open in 2021, will be integrated with much of the current C Line, creating two separate lines. One will operated along the current corridor between Willowbrook/Rosa Parks station and Redondo Beach station, while another will run from Norwalk along the current C Line before turning onto the newly built infrastructure and terminating at Expo/Crenshaw station. [4]

The entire route of the C Line is grade-separated, with its tracks following a fully elevated route, either on a guideway or in the median of the Century Freeway (Interstate 105). The line begins in the west at Redondo Beach station, then heads roughly north through El Segundo. At Aviation/LAX, passengers can transfer to any one of several bus lines from different operators, particularly Shuttle Bus "G", a shuttle bus from the C Line to LAX. From here, the C Line heads east in the median of the Century Freeway, with a connection to the Metro J Line bus rapid transit line at the Harbor Freeway Station. It then continues to a major transfer connection at the Willowbrook Station (transfer point to the A Line). Finally, the line terminates in the city of Norwalk, just east of the 605 Freeway. A junction at Willowbrook/Rosa Parks allows trains to transfer to A Line tracks for maintenance and other non-revenue operations.

The C Line is the fastest light rail line in the Metro rail network, with trains typically operating at 55–65 miles per hour (89–105 km/h) on the I-105 freeway portion. When the C Line began service in 1995, it operated with only one-car trains. As ridership increased, two-car trains were then used. Ridership on the C Line has not been as high as the A Line, although it did have a higher ridership than the L Line (Gold) until 2013. [1] [2] Although nearly all of the C Line stations were built to accommodate three-car trains, the C Line has never used trains consisting of more than two cars. The stations west of Aviation/LAX Station were not built to accommodate three-car trains.

In 1972, Caltrans signed a consent decree to allow construction of the fiercely opposed Century Freeway (Interstate 105), which included provisions for a transit corridor in the freeway's median. Construction began in 1987 on the line as a light rail line, with a route mostly following I-105 but a short section in the South Bay following the Harbor Subdivision. The western alignment was originally planned and partially constructed to connect with Los Angeles International Airport (LAX), but the airport was planning a major renovation during the line's construction. Los Angeles World Airports wanted the connection to LAX to be integrated with this construction, but the Federal Aviation Administration voiced concerns that the overhead lines of the rail line would interfere with the landing paths of airplanes. [6]

Various studies have suggested extending the C Line north to LAX, Westchester, Loyola Marymount University, and even Santa Monica. A possible southern extension could take the C Line's southern terminus farther southeast, to the South Bay Galleria or beyond. And on the line's east end, the line may one day be extended from its current terminus at Norwalk station to Norwalk/Santa Fe Springs station. [7] 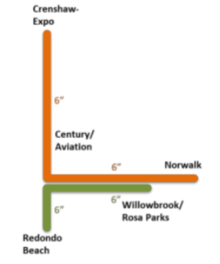 The Crenshaw/LAX Line project extends from the existing C Line, and the question of how the new segment would be integrated into the Metro Rail system was the subject of some controversy in 2018 as completion of the project loomed. Early proposals had suggested that a new line would operate between Expo/Crenshaw station in the north and Aviation/Century in the south, or possibly extend to Redondo Beach station once the stations west of Aviation/LAX station could accommodate 3-car trains, with the stretch southwest of the wye continuing to be served by the Metro C Line as well. [8] An additional service would have connected Norwalk to the new Aviation/Century station and planned 96th Street Transit station and the Airport Metro Connector. [9]

But this would require trains passing all three directions through the wye connecting the new and existing infrastructure, which Metro staff felt would unduly wear down the points. Instead, in 2018 Metro proposed a service plan that would see the newly opened segment connected to the bulk of the current C Line; the southwest segment of the C Line in the South Bay would operate as a separate shuttle between Redondo Beach and the new Aviation/Century station. The arrangement was meant to provide a seamless rail option for the many passengers who currently transfer between the C Line and north-south bus lines in the area, as well as operationally combine the Norwalk-LAX and Crenshaw/Expo-LAX legs, which have matching capacity needs, rather than combining either with the more sparsely used Redondo Beach leg. [10]

However, the plan was met with resistance from some board members, particularly Supervisor Janice Hahn, because it would require South Bay passengers to make multiple transfers to complete trips currently possible with only one transfer. [11] A faction of the Metro board led by Hahn proposed a one-year pilot of an alternative routing scheme under which one line would travel from Norwalk to Expo/Crenshaw and another from Redondo Beach to Willowbrook/Rosa Parks. The proposal, dubbed C-3, was approved by the Metro board on December 6, 2018. [12] This option will entail an additional $10 million annual operating cost over Metro's initial proposal, in large part because a substantial segment of the current C Line between Willowbrook and Aviation/LAX will see three-minute headways at peak hours. The adopted proposal will also limit the potential length of trains on the new segment to two cars due to power constraints, and will preclude a one-seat ride from the South Bay to LAX, [13] but will maintain the ability of South Bay passengers to transfer directly to the J and A Lines. 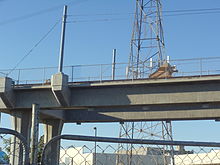 The future South Bay C Line extension will extend the Metro C Line from these stub tracks at the southern end of the Redondo Beach station to Torrance.

Metro is currently working on the initial environmental study of a corridor extension of the C Line from its Redondo terminus toward the southeast. The Green Line Extension to Torrance would roughly follow the Harbor Subdivision ROW into the South Bay, to the Torrance Regional Transit Center (RTC). [14] Metro and the public are considering two alternatives in the DEIR: an elevated light-rail extension, and an at-grade extension over existing tracks, with vehicle type still to be determined. Study of the South Bay Extension will lead to publication of a Draft Environmental Impact Report (DEIR). The study was expected to be completed in 2011. Project was placed on hold in Spring 2012 due to uncertain funding. With the passage of Measure M in 2016, $619 million was cited for the Green Line Extension south and the study resumed, which is currently scheduled for release in mid 2020 release. [15] The study area includes the former Harbor Subdivisions right of way. The extension study includes the Redondo Beach station to the Torrance Transit Center, a 4.5-mile (7.2 km) extension study area. [16]

According to the LA County Expenditure Plan (Measure M), groundbreaking for the project is currently[ when?] scheduled for 2026, with expected opening in 2030–2033. The timeline is expected to be accelerated under the Twenty-eight by '28 initiative. [17]

The C Line's eastern terminus suffers from the fact that it stops two miles (3 km) just short of the heavily used Norwalk/Santa Fe Springs Metrolink station, where several Metrolink lines operate. Local bus service is provided between the Metrolink station and the C Line terminus, but schedules are not coordinated with the C Line arrivals. While plans exist to close the gap, [18] available Measure M funding allows for operation to start in roughly 2052. [19] [20]

Metro C Line Yard- Division 22 (Hawthorne). The C Line has the smallest rail yard of all the Metro Rail lines

The Harbor Freeway station, a transfer point to the Metro Silver Line, a bus rapid transit line which serves as an alternative to the Metro A Line 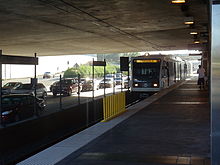 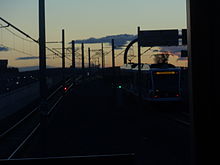 The C Line consists of the following 14 stations (from west to east):

The C Line is operated out of the Division 22 Yard (Aviation Street Yard) and the Division 16 Yard (Southwestern Yard). These yards stores the fleet used on the C line. Light maintenance is done on the fleet in Division 22 where as heavier maintenance is done in Division 16. Division 22 is located between Redondo Beach and Douglas stations. Trains enter the yard via a junction halfway between the two stations. Norwalk bound trains (Northbound) may enter but there is no exit track to continue North. Redondo Beach bound trains (Southbound) may enter and exit the Yard to continue south. Division 16 is located on the completed section of the Crenshaw/LAX Line in Westchester.

At the time the Green Line opened, the line used rolling stock made by Nippon Sharyo similar to those used on the Blue Line. In late 2001, the Nippon Sharyo P2020's were transferred to the Blue Line, and the Green Line received new Siemens P2000 railcars which have been operating on the line ever since. Kinkisharyo P3010 trains are also used. Trains are limited to two-car sets due to limitations at some stations along the line. [23]