The airport covers 1,304 acres (528 ha) and has four runways; however, as of February 1, 2020, one of the four runways, runway 17-35, is permanently closed. [1] Its original art deco terminal building, the first passenger airline terminal in Houston, now houses the 1940 Air Terminal Museum. 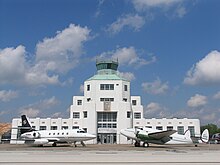 The 1940 Air Terminal Museum, originally an air terminal opened in 1940

Hobby Airport opened in 1927 as a private landing field in a 600-acre (240 ha) pasture known as W.T. Carter Field. In the 1930s it was served by Braniff International Airways and Eastern Air Lines. The site was acquired by the city of Houston and was named Houston Municipal Airport in 1937. [6] The airport was renamed Howard R. Hughes Airport in 1938. Howard Hughes was responsible for several improvements to the airport, including its first control tower, built in 1938. [6] The airport's name changed back to Houston Municipal because Hughes was still alive at the time and regulations did not allow federal improvement funds for an airport named after a living person.

The city of Houston opened a new air terminal and hangar in 1940.

In 1967 the airport was renamed after a former Texas governor, William P. Hobby.

Besides the Braniff/Pan Am and KLM services to Europe, the airport had other long flights: Braniff was flying nonstop from Hobby to Panama City, Panama with Boeing 707s and Boeing 720s in the late 1960s. [28] Braniff's April 1969 timetable shows nonstop 707s to Hawaii [29] but flights from Houston to Hawaii didn't actually start until September 1, after the move to IAH. [30] (Hobby's 7600-ft runways would have been shortish for a 707 nonstop to Hawaii.)[ citation needed] 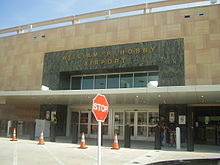 In 1987 Continental Airlines had a "dual hub", a hub at Intercontinental Airport (IAH) and one at Hobby. [38] In February 1987 Continental had nonstops from Hobby to Austin, Denver, Las Vegas, Los Angeles, Miami, New Orleans, New York LaGuardia Airport, San Antonio and Washington D.C. National Airport. Nonstop "cross town" shuttle service was also being flown between HOU and IAH with Douglas DC-9-10s by Emerald Air operating as the "Houston Proud Express" or Continental with these flights using "CO" flight numbers with seven round trips a day. CO one-stops flew from Hobby to Bozeman, MT, Orlando, Sacramento and Tucson. Continental was operating up to 37 departures a day from HOU with Boeing 727-100s, 727-200s, 737-200s, 737-300s, Douglas DC-9-10s and McDonnell Douglas DC-9-30s. The airline shut down its hub at Hobby and was not serving the airport by the early 1990s although its regional affiliate Continental Express would return with "cross town" turboprop flights to IAH by the mid 1990s followed later by limited Continental mainline jet service. [39]

In fall 1991 the OAG listed main line flights to Hobby on American Airlines, Delta Air Lines, Northwest Airlines, Trans World Airlines ( TWA) and United Airlines in addition to Southwest. [40] Other airlines jets at Hobby in the 1980s included Air Florida, Braniff, Eastern Air Lines, Emerald Air (operating independently and also on behalf of Continental Airlines as the aforementioned "Houston Proud Express" with DC-9s between HOU and IAH), the original Frontier Airlines, Muse Air, People Express, Republic Airlines and TranStar Airlines. [41] Alaska Airlines also served Hobby in 1990 via an interchange agreement with American Airlines which enabled direct Boeing 727-200s to Anchorage and Fairbanks via Dallas/Ft. Worth and Seattle. [42] At one point, Continental Airlines was operating Boeing 737-300s between Hobby and Houston Intercontinental and flying nonstop HOU to its Newark hub. In 2008 the airport handled 8.8 million passengers. [43] Only domestic US destinations and international destinations with border preclearance were being served, but in fall 2015 Southwest opened a new international terminal allowing it to fly to foreign citiess. [44]

The headquarters for TranStar Airlines (formerly Muse Air before this new start up air carrier was acquired by Southwest Airlines) were at the airport. [45] Muse Air followed by TranStar operated a hub at Hobby flying McDonnell Douglas MD-80s, DC-9-50s and DC-9-30s nonstop to Austin, Brownsville, TX, Dallas Love Field, Las Vegas, Los Angeles ( LAX), Lubbock, Ontario, CA, McAllen, TX, Miami, Midland/Odessa, New Orleans, Orlando, San Antonio, San Francisco, Tampa and Tulsa with direct service to San Diego and San Jose, CA at various times during the 1980s. [46] Several other airlines were based at the airport in the past as well, including Pioneer Airlines and Trans-Texas Airways (TTa) with the latter then changing its name to Texas International Airlines. Trans-Texas followed by Texas International operated a hub at the airport as well. [47] [48] Pioneer and Texas International merged with Continental Airlines, Pioneer in 1955 and Texas International in 1982. Continental continued to use the former Texas International maintenance base at Hobby after the merger. [49]

International service in the 1960s

Previously, KLM and Pan American World Airways ( Pan Am) operated international flights from the International Building at Hobby until the late 1960s. [50] In 1966, Pan Am was operating a daily Boeing 707 flight nonstop to Mexico City with continuing, no change of plane service to Guatemala City, Guatemala; San Salvador, El Salvador; Managua, Nicaragua; San José, Costa Rica and Panama City, Panama. [51] In 1969, both airlines moved to IAH and the International Building was demolished. [52] Braniff International operated international service as well from the airport and in the spring of 1966 was operating nonstop Boeing 707 and Boeing 720 jet service twice a week to Panama City, Panama with connections in Panama to other Braniff flights to South America. [53] Also in 1966, Braniff was operating a joint international service via an interchange agreement with Pan Am to London, England and Frankfurt, Germany on a daily basis with Boeing 707 jetliners via intermediate stops at Dallas Love Field and Chicago O'Hare Airport. [26] Aeronaves de Mexico (now Aeromexico) served Hobby as well with flights to Mexico and in the spring of 1968 was operating Douglas DC-9-10 jet service nonstop to Monterrey with continuing, no change of plane service several days a week to Guadalajara and Acapulco. [54] Trans-Texas Airways also served Mexico and in 1968 was operating direct, no change of plane service from Hobby with Convair 600 turboprops eleven times a week to Monterrey and six times a week to Tampico and Veracruz via south Texas. [55] 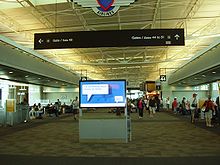 The interior of the airport terminal

In May 2011 Southwest Airlines expressed interest in initiating new international flights from Hobby. [56]

On April 9, 2012 Houston Director of Aviation Mario Diaz announced support of international flights from Hobby after multiple studies of the economic impact on the entire city of Houston. On this day Southwest Airlines also debuted its new campaign, called Free Hobby. Supporters are asked to sign a petition. Southwest also started a website just for supporters of international flights from Hobby, freehobbyairport.com. [57]

United Airlines, Houston's other major carrier, which would later be forced to compete with Southwest on proposed international routes, has objected to the expansion plans, citing a study which concludes that the change would cost the Houston area jobs and result in a net reduction in GRP. [58]

Houston Mayor Annise Parker backed Southwest's fight to make Hobby an international airport on May 23, 2012. [59] On May 30, 2012 Houston's city council approved Southwest's request for international flights from Hobby. [60] The groundbreaking of the terminal expansion began in September 2013. [61] Five new gates (two arrival/departure gates and three arrival only gates) were added to accommodate both Boeing 737 and Airbus A320 family aircraft. [62] The expansion was estimated to have cost $156 million and was paid for by Southwest Airlines. [61] The expansion also included constructing a new parking garage as well as a re-organization and expansion of the security checkpoint and Southwest Airlines' check-in counter. Vertical construction was officially completed on October 15, 2015 and Southwest launched international flights that same day. [63] [64]

William P. Hobby Airport has a single terminal with two concourses (one domestic and one international) and 30 overall gates. [65] The domestic concourse, which has various retail shops and restaurants, opened in 2003 and replaced the original three concourses dating back to the 1950s. [66] It also includes an interfaith chapel. [67] The international concourse opened on October 15, 2015. [68]

In February 2020, Hobby Airport became the first airport in Texas to have full biometric entry and exit for passengers who are traveling internationally. [69]

The Metropolitan Transit Authority of Harris County, Texas, or METRO, stops at Curbzone 13. [70]

Courtesy vans are operated by various hotels and motels in and around the Houston area. There are courtesy telephones in the baggage claim areas to request pick-up for most hotels and motels. [70]

Shared-ride shuttle service is available at HOU. SuperShuttle takes reservations and picks-up travelers at their homes or businesses and transports them to the airport and vice versa. Additionally, regularly scheduled bus and shuttle service is provided by various carriers to locations from HOU to areas outside metropolitan Houston and to Galveston and College Station. These services can be found in the baggage claim area. [70]

There are several pieces located in and on the airport grounds: Artists Paul Kittleso and Carter Ernst created "Take-off," a stainless steel bird's nest showing interwoven branches created using industrial materials. The nest is 30 feet (9.1 m) wide and is held 20 feet (6.1 m) above the ground by three steel tree trunks. The nest is depicted floating above a subtropical garden. The artists created the work to depict the spirit of Houston's industrial force along the coastal plain. "Take-off" is located at Hobby's Broadway Street entrance. [71]