The Sunset Limited is an Amtrak passenger train that for most of its history has run between New Orleans and Los Angeles, over the nation's second transcontinental route. However, up until Hurricane Katrina in 2005, it ran between Orlando and Los Angeles, and between 1993 and 1996, continued on to Miami (via the Silver Meteor's route). It is the oldest named train in the United States; it was first introduced in 1894 by the Southern Pacific Railroad, and was handed to Amtrak upon its formation in 1971.

Most of the current route from New Orleans westward is now owned by the Union Pacific Railroad, which acquired Southern Pacific in 1996. However, most of the route within Louisiana itself was sold to BNSF Railway in 1995 in return for BNSF not objecting to the UP-SP merger.

The train uses the following route segments, identified here by the names of their original owners:

Service on the Sunset Limited between New Orleans and Florida has been suspended since August 29, 2005 because the rail line in the path of Hurricane Katrina east of New Orleans was washed out. The operating railroad CSX restored the line itself between New Orleans and Jacksonville. However, in 2006, Amtrak said it was deemed too expensive to rebuild to modern passenger rail standards. In 2016 Amtrak proposed to return the Sunset Limited service to Florida in the near future.

A highlight of the trip is the crossing of the Huey P. Long Bridge just west of New Orleans. The bridge is one of the longest railroad bridges in the United States, at 4.5 miles (7.2 km); it takes the train 135 feet (41 m) above the Mississippi River.

In its present form, the eastbound Sunset Limited leaves Los Angeles in the late evening, traveling overnight through Arizona before arriving at breakfast time in Tucson and mid-afternoon in El Paso. After traveling through west Texas overnight, it separates from the Texas Eagle in San Antonio. Resuming the second day of the trip, it arrives in Houston at lunchtime, Lafayette at rush hour, and the middle of the night in New Orleans. The westbound train leaves New Orleans just after rush hour, arriving in Lafayette at lunchtime and just after the afternoon rush in Houston. It then joins the Texas Eagle just after midnight, and travels overnight through west Texas before arriving in El Paso at lunchtime the following afternoon and dinner time in Tucson and Maricopa. After traveling overnight through Arizona and California, it arrives in Los Angeles before breakfast. 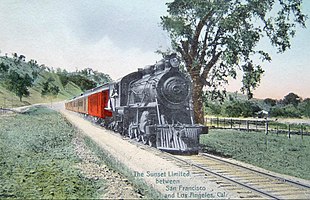 The train when it ran between New Orleans and San Francisco 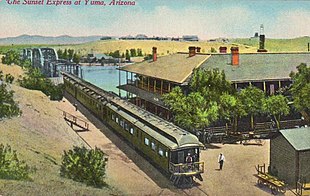 Early depiction of the train at Yuma, Arizona. 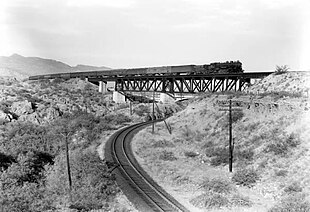 The train crossing Ciénega Creek near Vail, Arizona, in 1921.

Before the start of Amtrak on May 1, 1971, the Sunset Limited was operated by the Southern Pacific Railroad. The Sunset Limited is the oldest named train in the United States, operating since November 1894 along the Sunset Route (though originally named the Sunset Express). The Sunset Route (originating in New Orleans) is the southernmost of the three gateways to the West Coast envisioned through the Pacific Railroad Acts. The other two embarked from Chicago and St. Louis. However, the Sunset Route had two major advantages over the other two routes. It was an all-weather, year-round route that didn’t face the crippling snows of the Wasatch or Sierra mountain ranges to reach the Pacific Coast. Additionally, the other two routes had to assault the front range of the Rockies.

The Sunset Limited was Southern Pacific's premier train. [3] Initially, the Sunset Limited was an all- Pullman train, with sleeping cars and no coaches, running from New Orleans to San Francisco via Los Angeles. From its beginning in 1894, until streamlining in 1950, all the train's cars had 6-wheel trucks and dark olive green paint, with black roofs and trucks. In the summer of 1926, it was scheduled at 71 hr 40 min New Orleans to San Francisco; it then carried a coast-to-coast sleeper from Jacksonville to Los Angeles.

The train was dieselized in late 1949. In August 1950, it was the last major American luxury train to become a streamliner. Also in 1950, the train got a new look, with stainless steel cars with red letterboards and white "Southern Pacific" lettering. All cars except the RPO-Baggage (which had 6-wheel trucks) had 4-wheel trucks. The last car of the train was a sleeping car with a blunt rear end and a lighted neon sign with the train name on the rear door. Until 1950 the train was pulled by 4-6-2 Pacific type and 4-8-4 GS-1 Northern type steam locomotives between New Orleans and El Paso, and by 4-8-2 MT-4 Mountain type and 4-8-4 GS-4 Northern type steam locomotives between El Paso and Los Angeles/San Francisco. Occasionally, even some 4-10-2 Southern Pacific type and 4-8-8-2 AC class Cab Forward type steam locomotives could be seen, especially on the western portion of its run. Steam occasionally appeared on the Sunset Limited until 1953. 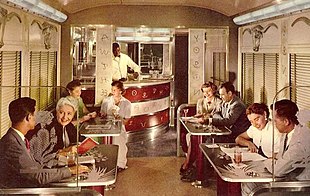 Interior of the "Pride of Texas" lounge car.

A typical consist from the early 1950s included:[ citation needed]

The Sunset was not spared from the sharp decline in rail service from the 1950s onward. During the 1960s, amenities were progressively cut back, culminating in the elimination of the dining car, lounge car and all sleeping cars. By 1968, the once proud streamliner had three cars: a baggage car, a coach and an automat lunch counter car. The Sunset Limited was even combined with the Golden State passenger train west of El Paso in 1964. In October 1970, SP reduced the Sunset to a tri-weekly schedule, but with full dining and sleeping car service returning over the entire route. This was the state of the train when Amtrak took control in May 1971.

A typical consist between October 1970 and April 1971 (the last months under Southern Pacific's thrice-weekly operation):

Amtrak left the Sunset unchanged, while it dropped the Louisville & Nashville's Gulf Wind, which operated between New Orleans and Jacksonville, Florida. The tracks between these two points remained unused by passenger trains until April 29, 1984, when an Amtrak train called the Gulf Coast Limited, running between New Orleans and Mobile, Alabama, began service, seeking to regenerate some form of regional intercity rail traffic between large cities outside the Northeast. However, this train only lasted until January 6, 1985. Almost five years later, on October 27, 1989, the track segment between Mobile and Flomaton, Alabama, came into passenger train use as part of the route of the Gulf Breeze. This was another attempt to regenerate regional inter-city rail traffic, this time between Birmingham, Alabama, and Mobile. The train was a reestablishment of the Mobile section of Amtrak's New York City— New Orleans Crescent. It branched from the Crescent's route at Birmingham, turning south toward Montgomery, Flomaton, and terminating in Mobile. The Gulf Breeze was discontinued in 1995.

Meanwhile, on April 4, 1993, passenger service was reestablished along the entire New Orleans— Jacksonville corridor with the extension of the Sunset Limited to Miami, using the route of Amtrak's Silver Meteor south of Jacksonville; it was serviced at Amtrak's Hialeah yards for the return trip. This marked the first direct rail service between Orlando and Miami. However, schedule unreliability caused the Sunset Limited's eastern terminus to be truncated to Sanford on November 10, 1996. Service was re-extended to Orlando on October 26, 1997, and the train deadheaded (operated empty) between Orlando and Sanford for servicing. Sanford was, and still is, the servicing point for Amtrak's Auto Train.

On September 22, 1993, the three locomotives and six of the eight cars of the eastbound Sunset Limited derailed and fell off a damaged bridge into water near Mobile, Alabama, in Amtrak's worst train wreck, the Big Bayou Canot rail accident. 47 people died.

On October 9, 1995, saboteurs derailed the Sunset Limited near Harqua, Arizona by removing 29 spikes from a section of track, and short-circuited the signal system to conceal the sabotage. The attack killed one person and injured dozens of others. The crime still remains unsolved. [4]

On June 2, 1996, the Sunset Limited was rerouted to a more southerly route between Tucson, and Yuma, Arizona, bypassing Phoenix. Union Pacific, which had acquired Southern Pacific earlier in the year, wanted to abandon a decaying portion of its Phoenix–Yuma "West Line". This made Phoenix one of the nation's largest cities without direct passenger service; although the designated Phoenix-area stop is in Maricopa, a suburban community about 40 miles (64 km) south of downtown Phoenix. Amtrak Thruway Motorcoach service, run by Stagecoach Express, connects the two cities. [5]

The Sunset received a better schedule on May 7, 2012, moving its westbound movements from New Orleans to a Monday, Wednesday, Saturday circuit. The times allow several 7- to 12-hour rides between major-city pairs; for example, overnight between Tucson or Maricopa (for Phoenix) and Los Angeles in both directions. [6]

On August 29, 2005, the Sunset Limited route was truncated at San Antonio, Texas, as a result of damage to trackage in the Gulf Coast area caused by Hurricane Katrina. In late October 2005, service was restored between San Antonio and New Orleans, as the line through Louisiana had been repaired.

As time has passed, particularly since the January 2006 completion of the rebuilding of damaged tracks east of New Orleans by their owner CSX Transportation Inc., the obstacles to restoration of the Sunset Limited's full route have been more managerial and political than physical. Advocates for the train's restoration have pointed to revenue figures for Amtrak's fiscal year 2004, the last full year of coast-to-coast Sunset Limited service. During that period, the Orlando–New Orleans segment accounted for 41% of the Sunset's revenue. [7]

As of 2018 [update], Amtrak's schedules and maps continue to describe the route between New Orleans and Orlando as suspended. [5]

In 2009, Brian Rosenwald, a now-departed Amtrak executive, outlined ideas for a complete overhaul of the route, including daily service. [9] It was to have the Texas Eagle operate over the Sunset's route west of San Antonio, with a stub train connecting San Antonio (with a cross-platform transfer) and New Orleans. The plans were halted when Union Pacific stated that to get a daily Sunset Limited, Amtrak would need to pay $750 million for infrastructure improvements. [10]

Passenger totals would double with daily service, according to the PRIIA study that looked at Texas Eagle/Sunset Limited service. It forecast an incremental improvement of more than 100,000 passengers from the daily service, which is already running in excess of 100,000 a year. [11] In the meantime, the Union Pacific has double-tracked much of the route with its own money. However, Amtrak still lacks the equipment and funds needed to move to daily service.

In January 2016, Amtrak and the Southern Rail Commission announced jointly that a Gulf Coast passenger rail inspection trip was to be made from New Orleans to Jacksonville, with elected officials among those on board during the February 18–19 excursion. Stops were planned for all of the stations formerly part of the Sunset Limited's route between those two cities. [12] In June 2018, the commission missed the deadline for submitting a request for service restoration along the Gulf. It said that it could not apply for the Federal Railroad Administration's (FRA) fiscal-year 2017 Consolidated Rail Infrastructure Safety and Improvements (CRISI) funding because Alabama and Mississippi were unwilling to assist with funds. Alabama's share would have been $5.3 million. The Louisiana governor, on the other hand, was willing to provide the funds. The three states' cooperation was needed to secure the $35.5 million in federal CRISI funds. [13]

In June 2019, the Federal Railroad Administration announced a grant award of $33 million to restore Amtrak service between New Orleans and Mobile, and to upgrade tracks, stations, and other facilities to support improved passenger rail service. The grant was matched by funds from Louisiana, Mississippi, and the city of Mobile. Officials announced plans for up to four daytime rail trips per day within 24 months, serving the cities of New Orleans, Bay St. Louis, Gulfport, Biloxi, and Pascagoula. Having received a commitment of support from the City of Mobile, if the state of Alabama participates, service could be extended to downtown Mobile. [14] [15]