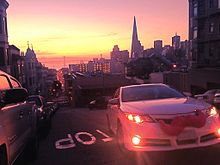 Lyft's distinctive pink mustache was the first branding the company used until 2015 when it switched to a smaller, glowing magenta mustache that sits on a driver's dashboard.

Lyft, Inc. is an American ridesharing company based in San Francisco, California and operating in 644 cities in the United States and 12 cities in Canada. [3] It develops, markets, and operates the Lyft mobile app, offering car rides, scooters, a bicycle-sharing system, and a food delivery service.

Lyft is the second-largest ridesharing company in the United States with a 28% market share after Uber, according to Second Measure. [4]

Most jurisdictions regulate ridesharing companies and they are banned from operating in some jurisdictions. For more information, see Legality of transportation network companies by jurisdiction.

Riders must download the Lyft mobile app to their smartphone, sign up, enter a valid phone number, and enter a valid form of payment (either a credit card, Lyft Gift card, or link to an Apple Pay, Google Wallet, or PayPal account). [5] [6] Once the trip is completed, funds are debited from the funding source. [7]

Once their account is set up, passengers can request a ride from a nearby driver. Once confirmed, the app shows the driver's name, ratings by past passengers, and photos of the driver and car. [8] Drivers and passengers can add personal information to their profiles about their hometown, music preferences, and other details to encourage drivers and passengers to converse during the ride. [9] After the ride is over, the rider is given the opportunity to provide a tip to the driver, which is also billed to the rider's payment method. [10]

Lyft offers five types of rides within the app: [11] 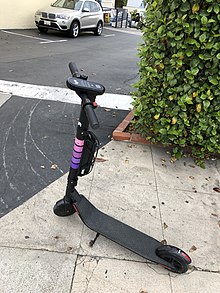 After a ride is completed, drivers and passengers are given the opportunity to rate each other on a scale of one to five stars. [18] Any driver averaging a low rating by a passenger will not be matched with that passenger again. [17] Lyft does not allow passengers to know their rating. [19] The ratings establish the reputations of both drivers and passengers within the network. [20]

Although Lyft drivers are classified as independent contractors, Lyft also insures each driver with a US$1 million commercial liability policy that is primary to a driver's personal policy. Additional coverage includes: [21]

As of October 2019, more than 34 women were suing Lyft in the United States. These women allege that they were raped or assaulted by Lyft drivers, and that the company did not do enough to keep them safe [24] and that Lyft attracts drivers that plan to prey on vulnerable women. [25] Many women claim that, even after they reported their assault to Lyft, the company ignored their report and continued to allow the assailants to drive with Lyft. [26]

A Lyft vehicle in Santa Monica, California, with the original grill-stache branding, since retired

Lyft was launched in the summer of 2012 by computer programmers Logan Green and John Zimmer as a service of Zimride, a long-distance intercity carpooling company they founded in 2007. [27] [28]

Green had the inspiration for Zimride after sharing rides from the University of California, Santa Barbara campus to visit his girlfriend in Los Angeles. He had used Craigslist’s ride boards but wanted to eliminate the anxiety of not knowing the passenger or driver. When Facebook opened its API to third-party developers, Green said he thought "Here’s the missing ingredient." [29] Zimride linked drivers and passengers through the Facebook Connect application. [30] By using Facebook profile information, student drivers and passengers could learn about each other. [31] Zimride eventually became the largest carpool company in the United States. [32] [33] Green was introduced to John Zimmer through a mutual friend and the pair initially met on Facebook. The company name came from the country Zimbabwe, where, during a trip in 2005, Green observed locals sharing minivan taxis. [34] [35] [36] Zimride launched at Cornell University, where, after six months, the service had signed up 20% of the campus. [37] [38]

In July 2013, Lyft sold Zimride to Enterprise Holdings, the parent company of Enterprise Rent-A-Car, to enable the company to focus exclusively on the growth of Lyft. [41]

Whereas Zimride was focused on college campuses, Lyft launched as a ridesharing company for shorter trips within cities. [31]

Lyft became known for the large pink furry mustaches drivers attached to the front of their cars. Riders were also encouraged to sit in the front seat and fist bump with drivers upon meeting. [42] In November 2014, the company distanced itself from the fist bump. [43] [44]

In January 2015, Lyft introduced a small, glowing plastic dashboard mustache it called a "glowstache" as an alternative to the large fuzzy mustaches on the front of cars. The transition was to help overcome the resistance of some riders to arrive at destinations, such as business meetings, in a car with a giant mustache. [45]

In April 2014, Lyft hired two lobbying firms, TwinLogic Strategies, and Jochum Shore & Trossevin, to address the regulatory barriers and opposition it had received since its launch. [50]

Due to regulatory hurdles in New York City, the company altered its business model when establishing Lyft on the East Coast of the United States. Lyft’s launch in New York City occurred on the evening of July 25, 2014, and, in accordance with the Taxi and Limousine Commission (TLC) and the approval of the Manhattan Supreme Court, only drivers registered with the TLC were permitted to drive Lyft-branded vehicles in New York City. [51]

In August 2014, the company introduced a shared ride concept, which provides cheaper fares. [52]

In September 2015, Lyft announced a relocation of its customer service operations to Nashville and mentioned that a full relocation would be possible in the future from San Francisco. [53]

In May 2016, Lyft began offering a service to let clients schedule rides up to 24-hours in advance. [55]

In November 2016, Lyft began offering riders the ability to make multiple stops during a trip. [56] [57]

In December 2017, Lyft expanded into Canada, with operations in the Greater Toronto Area, Hamilton, Ontario and Ottawa. [60]

In March 2018, Lyft partnered with Allscripts to create a platform allowing healthcare providers to arrange rides for patients who lack transportation to appointments. The service would be available to 2,500 hospitals, 180,000 physicians, and approximately 7 million patients. [62] [63]

In November 2018, Lyft acquired Motivate, a bicycle-sharing system and the operator of Capital Bikeshare and Citi Bike. [66] [67] The company also announced plans to add 28,000 Citi Bikes and expand its service. [68]

In July 2019, the company's Lyft Entertainment division received an Emmy nomination for its co-production of Billy on the Street. [71]

On July 19, 2019, Lyft added real-time public transport and subway information for New York City, amidst battles with the city. [72]

In April 2020, Lyft laid off 982 employees and furloughed an additional 288 in an effort to reduce operating expenses and adjust cash flows due to the COVID-19 pandemic in the United States. [74] The company continued to offer scooters for rent in San Francisco, while Miami government asked Lyft to halt operations. [75]

In November 2018, Lyft settled a class action suit filed in 2014 alleging that the company had sent large numbers of unwanted commercial text messages. [76] In addition to $4 million in payments to consumers, the plaintiffs sought $1 million in legal fees. [77]

In March 2018, Lyft partnered with GoMentum Station to test its self-driving technology. [84]

On March 14, 2018, Lyft partnered with Magna International to co-fund, develop, and manufacture autonomous vehicle systems to produce self driving technology that will be available to all car manufacturers. [85]