Woodbury University is a private, non-profit, coeducational, nonsectarian university located in Burbank, California with a satellite campus in San Diego.

Advertisement in the first year of the school's existence, 1884.

The school was founded in 1884 as Woodbury's Business College by its namesake, F. C. Woodbury, formerly a partner in Heald's Business College in San Francisco, thus making it the second oldest institution of higher learning in Los Angeles and one of the oldest business schools west of Chicago. That historic link between Woodbury and the world of business has been maintained throughout the years. Woodbury was coeducational from its founding, making it one of the earliest colleges West of the Mississippi to admit women. The original mission of Woodbury University was to educate Los Angeles residents in the practical areas of business: bookkeeping, commercial law, and telegraphy. For a time, Woodbury could boast that 10% of Los Angeles' citizenry were attending the institution and its earliest alumni lists form a who's who of 19th century Los Angeles. [1]

In 1931, the division of professional arts was established to focus on those fields of design that are closely allied to business: commercial art, interior design, and fashion design. Woodbury then became a college of business administration and design. In 1969, Woodbury introduced a graduate program leading to the Master of Business Administration (MBA) degree. In 1974, Woodbury College became Woodbury University.

In 1982, Computer Information Systems was added as a major, followed in 1984 by Architecture. In 1987, the Weekend College program for working adults was established with the aid of grants from The Fletcher Jones Foundation and The William Randolph Hearst Foundation. In 1994 the university formally organized its undergraduate and graduate programs into three schools: the School of Architecture and Design, the School of Arts and Sciences, and the School of Business and Management. [2] That year three majors in the School of Arts and Sciences came into being: Psychology, Politics & History and Liberal Arts & Business. Additional undergraduate degree programs have been added in the areas of Marketing, Animation Arts, Communication, and Leadership. 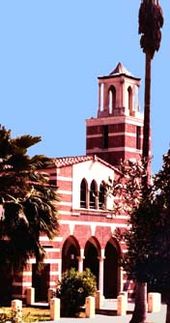 For the first 103 years, the university followed the growth of the business community based in Central Los Angeles. It was originally at 226 South Spring Street in Downtown Los Angeles. [3] By 1937, it moved to new facilities at 1027 Wilshire Boulevard in the Westlake district, just west of downtown. For 50 years this building served the university's classrooms and administrative needs.

In 1985, the university acquired a 22.4-acre (9.1 ha) suburban campus in Shadow Hills, Los Angeles. It was the site of the former Villa Cabrini Academy, a high school for girls run by the Missionary Sisters of the Sacred Heart of Jesus, founded by Frances Xavier Cabrini. [4] [5] In 1987, the university officially moved into this new campus. [6] Since it is located within the Burbank post office area, it became known as their "Burbank" campus and it has a Burbank GPS address.

Since 2005, the Los Angeles campus has been home to the Julius Shulman Institute. [7]

The university has a gallery in Hollywood, CA known as WUHO which houses experimental exhibitions and multi-disciplinary collaborations. [9]

Woodbury's BArch and MArch programs participate in the National Council of Architectural Registration Board's (NCARB) Integrated Path to Architectural Licensure (IPAL) initiative. NCARB has accepted 26 programs at 21 colleges to participate in the IPAL initiative. [25] The program streamlines the professional licensure process, providing students the opportunity to complete requirements for licensure while earning their degree. [26]

On May 10, 2014, Woodbury University announced that its School of Business earned AACSB accreditation, making it among only 12 international and four American business schools to do so in 2014. By earning AACSB accreditation, Woodbury joins 713 institutions of higher learning in 47 countries and territories around the world who have successfully completed the multi-year internal review, evaluation and improvement process. [44] AACSB accreditation represents the highest achievement for an educational institution that awards business degrees, a status conferred on less than 5 percent of all business programs worldwide.

Woodbury's Burbank campus has two residence halls with space for approximately 225 residents. South Hall, which is a small building composed mostly of single rooms, was built in the 1960s and houses up to 67 residents. South Hall is one of the original buildings acquired with the Burbank campus and was used as a dormitory for the Villa Cabrini Academy. North Hall, the larger of the two residence halls, opened in 1990 and houses up to 158 residents. [45]

Woodbury currently ranks 10th among the 161 ranked colleges and universities in California in the 2017 New York Times "Overall mobility index" which reflects both access and outcomes, representing the likelihood that a student at Woodbury moved up two or more income quintiles. [47]

Woodbury ranks first among western regional universities in the percentage of international students (24%) in the 2018 U.S. News and World Report College Rankings. [48]

2014 Money Magazine ranked Woodbury University 15th nationally out of the top 25 Colleges That Add the Most Value.' This recognition identifies Woodbury as a school that truly changes the trajectory of its students. US News & World Report Best Colleges Rankings (West) were: #48 Regional Universities, #15 Best Colleges for Veterans [50]

In 2012, the wife of then university president, Luis Calingo, was alleged to have mistreated maintenance workers employed at the school. In September 2012, the month after she had reported the alleged incidents to the human resources department (headed by Natalie Avalos), Rose Nielsen, wife of the former president of the University, was fired.

Nielsen then filed a lawsuit which the university said it would "vigorously defend its actions through the litigation process". [51] The case was settled out of court [52]

Since 1964, the university's fashion design students have presented their showcase work at the university's annual Fashion Show held at the historic Millennium Biltmore in Downtown Los Angeles. The show also features a Lifetime Achievement Award to a prestigious designer. In 2019, the award was given to Badgley Mischka. [53]