At the end of World War II, the necessity for another city college was needed, with a great numbers of returning servicemen. At the time the first and only city college during the 1940s was Los Angeles City College (LACC). Transportation was limited and costly, lowering the number of students able to attend LACC will at the same time the Eastside rapidly becoming an industrial center. Arthur Baum, editor of the East Los Angeles Tribune headed a citizen's committee, a group of presidents of all clubs and organizations in the community, Principal D. Raymond Brothers of Garfield, County Supervisor Smith, Superintendent Kersey and various industrial leaders. The group presented the proposition of a Junior College to the Los Angeles City Board of Education in a special meeting on March 1, 1945. The Los Angeles Board of Education voted to establish a Junior College to become Elac on the Garfield High School campus. East Los Angeles College would be the second city college (or junior college) existing in the Los Angeles area. The Los Angeles City Board of Education established East Los Angeles College in June 1945. The College opened for classes on September 4, 1945. It opened on the campus of Garfield High School with an enrollment of 373 students and a faculty of nineteen, although the school board authorized a faculty of 25, selected from the faculty of LACC. 107 students attended college classes at Garfield, while 266 attended at L.A. County Hospital in health careers, primarily nursing. The junior college was part of the Los Angeles City Public Schools ( L.A. Unified School District today). [2]

On September 19, 1945, the first edition of the Campus News (temporary paper) of the college was issued, while on the 25th a constitution for the Junior College was adopted and presented at an assembly. The college would have to deal with the overwhelming numbers of returning servicemen (veterans) coming in and using the G.I. Bill. About 50,000 men were being discharged in the state every month.

The College was moved to its present 82-acre site on Avenida Cesar Chavez in February 1948. The College is located six miles from the Los Angeles Civic Center. A part of the 2005 Goal! movie was filmed at the ELAC Weingart Stadium stadium.

ELAC is home to the Vincent Price Art Museum, a contemporary art museum named in honor of American actor and art collector Vincent Price. In 1957, impressed by the spirit of the students and the community's need for the opportunity to experience original art works first hand, Vincent and Mary Grant Price donated 90 pieces from their private collection to establish the museum, which was the first "teaching art collection" owned by a community college in the United States. The Price's ultimately donated 2,000 pieces over the course of their lifetimes and the museum's permanent collection now contains over 9,000 pieces valued in excess of $5 million. [6]

All clubs in East Los Angeles College are operated and chartered with the ELAC Associate Student Union.

The East Los Angeles College Alumni Association is responsible for continually connecting graduates to the student body and holds annual and bi-annual events to raise money for scholarships.

East Los Angeles College Campus News is the college's newspaper, and it was established in 1945. The paper is managed by the students after they have successfully completed Journalism 101. A print edition comes out every Wednesday during the Spring and Fall semesters. The current adviser is Jean Stapleton. Other organizations include East Side Spirit and Pride, the organization that founded the Husky marching band on campus, as well as helping to restore the football program in 1995. In addition, ESSP is now the alumni association for the college with Dennis Sanchez as the Chairperson and a board of directors of 23 members.

The East Los Angeles Honors Program, which is recognized by the UC system, the Pomona colleges, Occidental and Loyola Marymount, offers rigorous courses that are designed to help students transfer and successfully transition to four-year universities. The Honors Program is open to both part and full-time students and requires a 3.0 GPA to apply and be considered for enrollment. Successful completion of the Honors Program guarantees priority consideration for admission at 11 four-year universities throughout California and Washington. [7]

In 2016 the school ranked 13th for Best 2-Year College for adult learners under America's Best Colleges for Adult Learners by Washington Monthly. [8] In 2019 it was ranked number 1 in California and number 6 in the nation in awarding degrees and certificates to Hispanic Students, according to Hispanic outlook on education Magazine. [9]

Democratic front runner Hillary Clinton vied for votes for her presidential campaign Thursday, May 5, 2016 at East Los Angeles College. Several protests were held outside and several Bernie Sanders-supporters interrupted her speech, prompting her to cut it down to about 14 minutes. [10]

ELAC's football field at the Weingart Stadium the site of graduation ceremonies for local high schools such as Garfield High School in East Los Angeles. It has also hosted the "East L.A. Classic" football game between Garfield against Theodore Roosevelt High School, that traditionally draws over 20,000 fans. [12] In the 2016 even U.S. Senate candidate congresswoman Loretta Sanchez was in attendance. 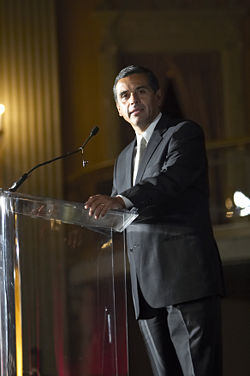