The entrance to California Community Colleges headquarters in Sacramento

Under the California Master Plan for Higher Education, the California Community Colleges is a part of the state's three-tier public higher education system, which also includes the University of California system and the California State University system. Like the two other systems, the CCCS is headed by an executive officer and a governing board. The 17-member Board of Governors (BOG) sets direction for the system and is in turn appointed by the California Governor. The board appoints the Chancellor, who is the chief executive officer of the system. Locally elected Boards of Trustees work on the district level with Presidents who run the individual college campuses. [4]

The CCCS is a founding and charter member of CENIC, the Corporation for Education Network Initiatives in California, the nonprofit organization which provides extremely high-performance Internet-based networking to California's K-12 research and education community.

In 1907, the California State Legislature, seeing a benefit to society in education beyond high school but realizing the load could not be carried by existing colleges, authorized the state's high schools to create "junior colleges" to offer what were termed "postgraduate courses of study" similar to the courses offered in just the first two years of university studies. [5] A collegiate "department" of Fresno High School was set up in the fall of 1910. This department later developed into Fresno City College, which is the oldest community college in California and the second oldest community college in the United States.

Thanks to the efforts of people such as Professor Alexis F. Lange, Dean of the School of Education at the University of California, Berkeley, the Junior College Act was passed in 1917, expanding the mission by adding trade studies such as mechanical and industrial arts, household economy, agriculture, and commerce. In the early 1920s, the Legislature authorized the creation of junior colleges as entirely separate educational institutions, in addition to the existing programs offered by high schools. [5] In 1921, California passed legislation which allowed for the creation of junior college districts separate from existing high school districts. In September 1921, Modesto Junior College (the 16th oldest community college in the United States) became the first junior college to be governed by a junior college district. This was the beginning of junior colleges that continued to offer trade studies such as mechanical and industrial arts but now also included general education. The first ever transfer student was from Modesto Junior College and transferred to Stanford in 1922.

The 1960 Master Plan for Higher Education was a turning point in higher education in California. Under the Master Plan, as implemented through the Donahoe Higher Education Act, the UC and CSU systems were to limit their enrollments, yet an overall goal was to "provide an appropriate place in California public higher education for every student who is willing and able to benefit from attendance", meaning the junior colleges were to fulfill this role. The Master Plan provided that junior colleges would be established within commuting distance of nearly all California residents, which required the founding of twenty-two new colleges on top of the sixty-four colleges already operating as of 1960. [6]

However, the state has suffered severe budget deficits ever since the enacting of Proposition 13 in 1978, which led to the imposition of per-unit enrollment fees for California residents (equivalent in all but name to tuition) at all community colleges and all CSU and UC campuses to get around the legal ban on tuition. Non-resident and international students, however, do pay tuition, which at community colleges is usually an additional $100 per unit (or credit) on top of the standard enrollment fee. Since no other American state bans tuition in public higher education, this issue is unique to California. In summer 2010, the state's public higher education systems began investigating the possibility of dropping the semantic confusion and switching to the more accurate term, tuition. [9]

The system is governed by the Board of Governors which, within the bounds of state law, sets systemwide policy. The 17 Board members, who represent the public, faculty, students, and classified employees, are appointed by the Governor of California as directed by Section 71000 of the California Education Code. [16] The Board is also directed by the Education Code to allow local authority and control of the community college districts to the "maximum degree permissible" and AB 1725 in 1974 added a formal consultation process which has resulted in the formation of a Consultation Council [17] to assure the Board of Governors and Chancellor's Office remain responsive in this respect.

Students have a right to participate. The BOG has established minimum standards governing procedures established by governing boards of community college districts to ensure faculty, staff, and students the right to participate effectively in district and college governance, and the opportunity to express their opinions at the campus level and to ensure that these opinions are given every reasonable consideration. [19] [20] The BOG standards state that the governing board of a community college district shall adopt policies and procedures that provide students the opportunity to participate effectively in district and college governance, including: [21]

District and college policies and procedures that have or will have a "significant effect on students" includes: [21]

The governing body of the association may order that an election be held for the purpose of establishing a student representation fee of $1 per semester, and a student may, for religious, political, financial, or moral reasons, refuse to pay the student representation fee in writing at the time the student pays other fees. [22] Regulations in the California Code of Regulations (CCR) require district governing boards to include information pertaining to the representation fee in the materials given to each student at registration, including its purpose, amount, and their right to refuse to pay the fee for religious, political, moral or financial reasons. [23]

The 2.4 million students of the California Community Colleges serve as the basis for the economic revitalization of California's workforce. Through its vocational endeavors, the CCC system has played a pivotal role in preparing nurses, firefighters, police, welders, auto mechanics, airplane mechanics, and construction workers to help mold the society of California. Career technical education (CTE), also known as vocational training, connects students to these career opportunities by providing industry-based skills.

In 2017, California sought to eliminate the lingering stigma around CTE. The overall goal was to train and place one million workers in middle-skill jobs, meaning jobs requiring some education beyond a high school diploma which may include a college credential but not a four-year degree. A core barrier to the growth of CTE careers is the outdated view about the jobs being dirty and low paying. Annual events such as Manufacturing Day address these misperceptions of careers in the field by providing manufacturers an opportunity to bring middle and high school students into their facilities to show them what it is and isn't. According to the World Economic Forum, more than half of the current workforce will need to be reskilled by 2022. 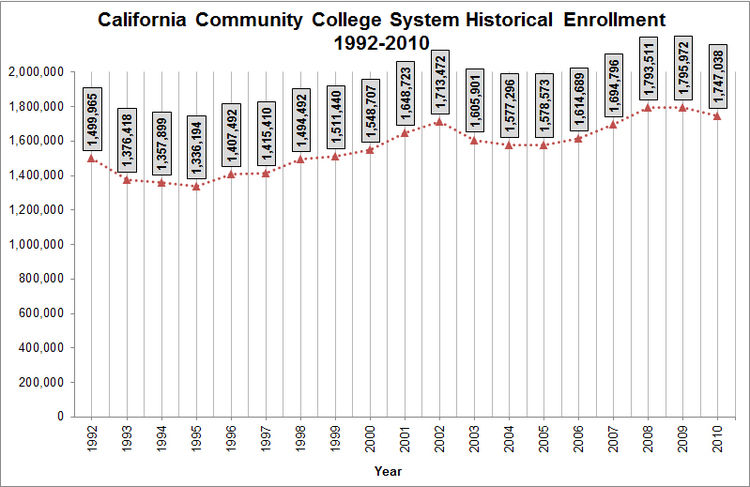 All 116 community colleges are empowered to establish their own college transit programs as state legislation allows for the collection of transportation fees. A transportation fee and program can be created if a majority of students vote in favor of such a program in a publicly held campus election. There are now a handful of these transit programs at several colleges. [28]

The California Community Colleges had a total employee headcount of 89,497 in fall 2006. While tenured and tenure tracked faculty were relatively well-compensated, they comprise a very small fraction of overall faculty compared to California's other two tertiary education systems. While 86% of CSU faculty members were tenured or tenure-tracked, only 30% of CCCS faculty were tenured or tenure-tracked. Temporary faculty, those who are not tenure tracked, earned an average of $62.86 per hour for those teaching for-credit courses, $47.46 for non-credit instruction, $54.93 for instructional support and $63.86 for "overload" instruction. [29]

In July 2013, City College of San Francisco was notified by its accreditor, the Accrediting Commission for Community and Junior Colleges (ACCJC), that its accreditation would be revoked in 2014 if the college failed an appeals process. Brice Harris, the systemwide chancellor of the California Community Colleges system, then appointed a "special trustee with extraordinary powers," an individual granted unilateral powers, to attempt to bring the college back into compliance with the ACCJC's accreditation standards. [32] In January 2017, CCSF was reaffirmed of its accreditation for the full seven year term by the ACCJC. [33]