The AFI Conservatory is a private not-for-profit graduate film school in the Hollywood Hills district of Los Angeles. Students (called "Fellows") learn from the masters in a collaborative, hands-on production environment with an emphasis on storytelling. The Conservatory is a program of the American Film Institute founded in 1969.

In 2013, Emmy and Oscar-winning director, producer and screenwriter James L. Brooks ( As Good as It Gets, Broadcast News, Terms of Endearment) joined the AFI Conservatory as Artistic Director, where he provides leadership for the film program. Brooks' artistic role at the AFI Conservatory has a rich legacy that includes Daniel Petrie, Jr., Robert Wise and Frank Pierson. Award-winning director Robert Mandel served as Dean of the AFI Conservatory for nine years. Jan Schuette took over as Dean in 2014 and served until 2017. Film Producer Richard Gladstein became Dean in May 2017. Michael Chung & Tom Engfer became Co-Interim Deans in November 2018.[ citation needed]

The Warner Bros. building on the AFI campus.

It is ranked in the top five graduate film programs along with USC, UCLA, NYU and California Institute of the Arts by the Princeton Review and US News and World Report [2]

First Year - Fellows from all disciplines work on at least three digital video or high definition short films (up to 20 minutes), referred to as 'cycle projects'. Each of these first-year projects are accomplished by Fellows with a minimum of oversight from the senior faculty. The purported goal being to stimulate a flexible and creative approach to filmmaking within imposed budgetary constraints and without the crutch of seasoned oversight. These 'cycle projects' make up the core curriculum of the first year experience and amount to a 'boot camp" of filmmaking that simultaneously challenges and invigorates the Fellows involved.

Second Year - Most Fellows work on at least one thesis short film, shot on digital video, high definition, 35mm film, or 16mm film, and develop portfolio materials (such as a reel and a feature film screenplay). Screenwriting Fellows have the option of writing two feature-length screenplays instead of participating in a thesis film. They are responsible for raising the bulk of their own financing for these projects (average budget is $30,000), and must adhere to standard industry regulations, such as SAG charter rules, during filming. The senior faculty of the conservatory oversee the development of the 'second year' projects and monitor their development in a manner similar to what might be expected of an Executive Producer. [3] 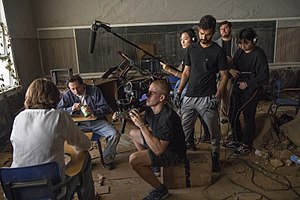 Cinematography - Encompassing training from pre-visualization to advanced image manipulation and control, Cinematography Fellows develop their storytelling skills using formats ranging from digital video to 16mm and 35mm film cameras to the most cutting-edge cameras on the market.

Directing - With a focus on narrative filmmaking, Directing Fellows learn diverse directing styles, techniques and strategies as they gain a thorough understanding of the production process, script to screen.

Editing - Editing Fellows master the skills to be editors, assistant editors and post-production producers while learning the technical, aesthetic and collaborative aspects of post-production with a primary focus on storytelling.

Producing - Producing Fellows study all aspects of creative, entrepreneurial production while developing and producing a minimum of three short films in their first year and a thesis film in their second year.

Screenwriting - Screenwriting Fellows conceive and write multiple projects in features, short films, long and short-form TV drama and comedy as well as webisodes and other Internet innovations. Fellows learn to collaborate with Directing and Producing classmates to bring their stories to the screen.

The Harold Lloyd Master Seminar series — named after silent film legend Harold Lloyd, who gave the first seminar in 1969 — takes place on campus throughout during the academic year and brings AFI Conservatory Fellows together with artists to share their work and experiences in an informal and accessible setting.

The program has graduated more than 5,000 Fellows. AFI Conservatory alumni include:

and many other filmmakers.