Los Angeles Southwest College was established in 1967, [1] two years after the Watts riots, in response to complaints of both officials and citizens that not enough was being done to educate the area's mostly African American population. The college, located at the intersection of Western Avenue and Imperial Highway in South Los Angeles, now serves an area population that is diverse. 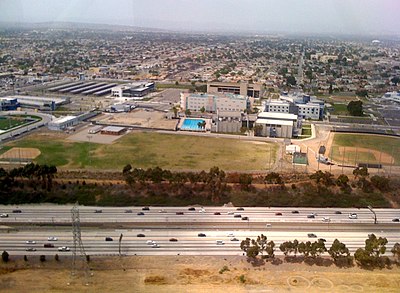 Aerial view of LA Southwest College from the south, with the I-105 freeway in foreground and practice baseball fields.

LASC has secured over $500 million of bonds to complete its master plan by 2012.[ needs update] As a "green campus", LASC has a college-wide recycling program and will have the majority of its building meeting some level of LEED standard.