From Wikipedia, the free encyclopedia
Upper house of the California State Legislature

Prior to 1967, state legislative districts were drawn according to the "Little Federal Model" by which Assembly seats were drawn to according to population and Senate seats were drawn according to county lines. The guidelines were that no Senate district would include more than three counties and none would include less than one complete county. This led to the situation of a populous county such as Los Angeles County (1960 population of 6 million) being accorded the same number of state senators (one) as less populous counties such as Alpine County (1960 pop. 397). In Reynolds v. Sims, the United States Supreme Court compelled all states to draw up districts with equal population. As such, boundaries were changed to comply with the ruling.

The Lieutenant Governor is the ex officio President of the Senate, and may only cast a vote to break a tie. The President pro tempore is elected by the majority party caucus, followed by confirmation of the full Senate. Other leaders, such as the majority and minority leaders, are elected by their respective party caucuses according to each party's strength in the chamber.

Each state senator represents a population roughly equivalent to the State of Delaware. As a result of Proposition 140 in 1990 and Proposition 28 in 2012, members elected to the legislature prior to 2012 are restricted by term limits to two four-year terms (eight years), while those elected in or after 2012 are allowed to serve 12 years in the legislature in any combination of four-year State Senate or two-year State Assembly terms. [3]

The red tones of the California State Senate Chamber are based on the British House of Lords, which is outfitted in a similar color. The dais rests along a wall shaped like an "E", with its central projection housing the rostrum. The Lower tier dais runs across the entire chamber, there are several chairs and computers used by the senate officers, the most prominent seat is reserved for the secretary who calls the roll. The higher tier is smaller, with three chairs, the two largest and most ornate chairs are used by the President Pro Tempore (right chair) and the Lieutenant Governor (left chair). The third and smallest chair, placed in the center, is used by the presiding officer (acting in place of the Pro Tem) and is rarely sat in as the president is expected to stand. There are four other chairs flanking the dais used by the highest non-member officials attending the senate, a foreign dignitary or state officer for example. Each of the 40 senators is provided a desk, microphone and two chairs, one for the senator, another for guests or legislative aides. Almost every decorating element is identical to the Assembly Chamber. Along the cornice appears a portrait of George Washington and the Latin quotation: senatoris est civitatis libertatem tueri ("It is a senator's duty to protect the liberty of the people"). 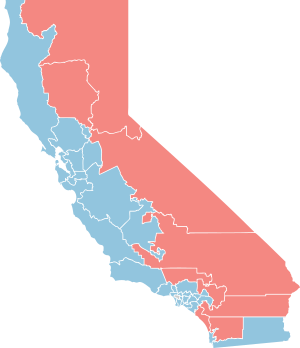 The Secretary, the Sergeant-at-Arms, and the Chaplain are not members of the Legislature.

Past composition of the Senate