From Wikipedia, the free encyclopedia
Private law school is Los Angeles, California
Not to be confused with Southwestern University.

Southwestern Law School is a private law school in Mid-Wilshire, Los Angeles. It is accredited by the American Bar Association and enrolls about 870 students.[ needs update] Its campus includes the Bullocks Wilshire building, an art deco National Register of Historic Places landmark built in 1929. Southwestern is an independent law school with no affiliation to any undergraduate university.

Southwestern Law School was founded on November 25, 1911, as the Southwestern College of Law. John J. Schumacher, its founder, intended the nonprofit institution to be a law school that reached out to women and minorities. The school is the second oldest law school in Los Angeles. Southwestern received a university charter in 1913 after it expanded to include a number of other disciplines including a business school. Southwestern's first home was in the Union Oil Building in downtown Los Angeles, followed by a small campus on South Hill Street, where it existed for the ensuing decades.

The Great Depression and Second World War took a severe toll on the enrollment, and by the end of the 1930s the law school was the only school that remained. However, as veterans returned home the school experienced a surge of interest, and in 1974, the campus was moved to the school's current location on Westmoreland Avenue in the Wilshire Center area of Los Angeles.

It joined the Association of American Law Schools (AALS) in 1974. [4] It is a member of the North American Consortium on Legal Education.

In 1994, Southwestern acquired the adjacent Bullocks Wilshire building, a historic landmark which was subsequently renovated to house the school's law library, classrooms, faculty offices, and court room and advocacy center. 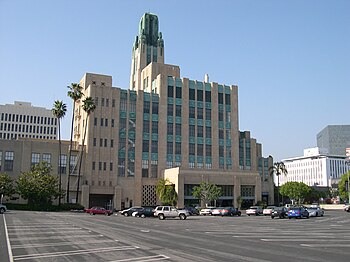 The Promenade at the center of the Southwestern Law School campus

The campus is in the Koreatown area of the Mid-Wilshire district near downtown Los Angeles. The campus comprises the Westmoreland Building and the Bullocks Wilshire Building. Both house classrooms, administrative offices, and faculty offices. The Bullocks Wilshire Building also houses the Leigh Taylor Law Library (named for a former Dean of the law school), the Julian Dixon Courtroom and Advocacy Center, a fitness center, a dining area, and student lounges.

The Westmoreland Building is a typical campus building, while the Bullocks Wilshire Building is a fully renovated art deco landmark restored to its 1929 state, from the clocks on the walls to the "showcases" in the library.

At over 83,000 square feet (7,700 m2) and featuring over 470,000 volumes, the Leigh H. Taylor Law Library is the second largest academic law library facility in California.

Based on July 2018 results, 53% of Southwestern Law graduates taking the test for the first time passed the California State Bar, vs. a statewide average of 55% for all first-time takers and a statewide average of 64% for first-time takers who graduated from ABA-approved law schools. [6] Southwestern was ranked 146-192 in the 2019 U.S. News and World Report "Best Law Schools" rankings. [2] The part-time program was ranked 42nd of 69. [2] Southwestern has been ranked among the top entertainment law schools in The Hollywood Reporter [7]

According to Southwestern's official 2013 ABA-required disclosures, 38.3% of the Class of 2013 obtained full-time, long-term, JD-required employment nine months after graduation, excluding solo-practitioners. [8] Southwestern's Law School Transparency under-employment score is 26.7%, indicating the percentage of the Class of 2013 unemployed, pursuing an additional degree, or working in a non-professional, short-term, or part-time job nine months after graduation. [9]

According to the law professor blog, The Faculty Lounge, based on 2012 ABA data, 44.1% of graduates obtained full-time, long-term, positions requiring bar admission (i.e., jobs as lawyers), nine months after graduation, ranking 154th out of 197 law schools. [10]

The total cost of attendance (indicating the cost of tuition, fees, and living expenses) at Southwestern for the 2013–2014 academic year is $75,559. [11] The Law School Transparency estimated debt-financed cost of attendance for three years is $293,914. [12]

The traditional program is three academic years of full-time study that allows students to pursue a broad-based legal education with opportunities to focus on a particular area of the law, such as: entertainment, criminal, international, business, family, or tax law, among others.

The evening program is four academic years of part-time study designed for working professionals and other students who are unable to devote full-time to the study of law.

Established in 1974, Southwestern founded the first two-year J.D. course of study offered at an American Bar Association-approved law school. SCALE (Southwestern's Conceptual Approach to Legal Education) is a unique, accelerated J.D. program. Its intensive schedule is intended prepare students for the rigors of practicing law. Low student-faculty ratio in the classroom promotes cooperative teaching and intellectual discussion among classmates. The program has a limited enrollment. [13]

Under a partnership agreement with California State University, Northridge in which students will be able to simultaneously earn their Bachelor of Arts and Juris Doctor in six years instead of seven years. Starting in fall 2014, the program enrolls up to 35 incoming CSUN freshmen. Students spend three years completing their undergraduate course requirements and their first year of law school will also count as their fourth year of undergraduate education. Students in the program also receive a $10,000 Wildman/Schumacher entering student scholarship. [14] The scholarship can be renewed provided that a minimum 2.7 GPA is maintained. In order to qualify for the program incoming freshmen must have a minimum 3.0 GPA and have received either a minimum score of 25 on the ACT or 1140 on the SAT. In addition, students in the program must maintain a 3.40 GPA and receive a 156 or higher on the LSAT. According to Dean Austen Parrish, the program will help young, promising undergraduate students pursue a legal education. [15]

Southwestern offers an individualized LL.M. program for students who have already earned a law degree and are interested in furthering their legal education. The program allows students to choose their own focus of study, from American Legal Systems to International Law to Technology Innovation and Commercialization.

In 2006, Southwestern was awarded a federal grant to train Mexican lawyers and law faculty in advocacy skills as part of a USAID effort to assist Mexican legal reform. [16]

Law Review is a student-edited quarterly journal that publishes scholarly articles and commentary on a variety of legal issues in California and federal law contributed by prominent jurists, practitioners, law professors, and student members of the Law Review staff. Annual Symposia and the Distinguished Lecture Series are sponsored by Law Review. These programs feature prominent members of the legal community lecturing on areas of legal expertise and participating in panel discussions on relevant emerging and contemporary legal issues.

In association with the American Bar Association Forum on Communications Law and Forum on Entertainment and Sports Industries, the Journal of International Media & Entertainment Law explores the complex and unsettled legal issues surrounding the creation and distribution of media and entertainment products on a worldwide basis, which necessarily implicate the laws, customs, and practices of multiple jurisdictions. Additionally, it examines the impact of the Internet and other technologies, the often conflicting laws affecting those issues, and the legal ramifications of widely divergent cultural views of privacy, defamation, intellectual property, and government regulation.

Southwestern's 10,000 alumni include public officials as well as founders of law firms and general counsels of corporations.

Susan Westerberg Prager was appointed dean in 2013. Previously, she was Executive Director and Chief Executive Officer of the Association of American Law Schools (AALS) and dean of UCLA School of Law. Austen L. Parrish served as Interim Dean from 2012 to 2013. He has been a member of the faculty since 2002 and was previously Vice Dean for Academic Affairs. Bryant G. Garth served as dean from 2005 to 2012. Prior to joining Southwestern, Garth was the Director of the American Bar Foundation (ABF), and Dean of the Indiana University School of Law – Bloomington. Garth's predecessor, Leigh H. Taylor, served as the law school's dean for 26 years.