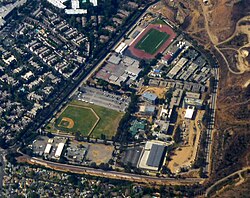 Aerial view of the campus.

West Los Angeles College (West L.A. College or WLAC) is a public community college in Los Angeles County, California. [2] It is part of the California Community Colleges System and the Los Angeles Community College District. It is accredited by the Accrediting Commission for Community and Junior Colleges. [3] The school offers Associate's degrees, and 18 vocational-oriented programs in addition to 25 transfer programs. The college awards more than 600 degrees and certificates annually in 39 fields.

Beginning in the fall of 2016, WLAC became one of only 15 community colleges in the State of California approved to offer a bachelor's degree. The bachelor's degree awarded at WLAC is in Dental Hygiene.

The college's athletic teams are nicknamed the Wildcats. The teams were previously known as the "Hustling Oilers."[ citation needed] The college currently sponsors 12 varsity sports, five men’s, six women’s, and one co-ed. West Los Angeles competes as a member of the California Community College Athletic Association (CCCAA) in the Western State Conference (WSC) for all sports except football, which competes in Southern California Football Association (SCFA). [4]