Yerba Buena Gardens is the name for two blocks of public parks located between Third and Fourth, Mission and Folsom Streets in downtown San Francisco, California. The first block bordered by Mission and Howard Streets was opened on October 11, 1993. The second block, between Howard and Folsom Streets, was opened in 1998, with a dedication to Martin Luther King, Jr. by Mayor Willie Brown. A pedestrian bridge over Howard Street connects the two blocks, sitting on top of part of the Moscone Center convention center. The Yerba Buena Gardens are owned by the San Francisco Redevelopment Agency and were planned and built as the final centerpiece of the Yerba Buena Redevelopment Area which includes the Yerba Buena Center for the Arts.

Yerba Buena was the name of the town in the Mexican territory of Alta California that became the city of San Francisco, California, after it was claimed by the United States in 1846. It was itself named after the yerba buena (Micromeria douglasii) plant which used to be abundant in the area. [2] The plant's common name, yerba buena, is an alternate form of the Spanish hierba buena (meaning "good herb").

The idea of building a conference center, under the name Yerba Buena Center, in downtown San Francisco was a further development of the idea stemming from the late 1950s to redevelop the city center, particularly the industrial areas that were gradually falling into disuse. At the heart of the proposal was the vision of the city transforming from an industrial to a tourist-conventioneering city.[ citation needed] The idea of the Yerba Buena Center itself first emerged in the early 1960s. [3] At that time there was a concern about how development could occur in the downtown area. The South of Market area offered hundreds of acres of flat land at low land prices. Various corporate committees were founded to lobby for the redevelopment, which would also include high-rise office buildings, a vast parking garage, and a sports center. At the center of operations was the San Francisco Redevelopment Agency (SFRA) first headed by Joseph Alioto, who would go on to become mayor of the city in 1968. The area of the development was regarded as a blighted area of the city, even referred to by local media, local business and city officials as ' skid row'.[ citation needed] However, the developers did not figure on the persistence of the local community, the vast majority of which were aged, male, ex-industrial workers who lived alone in the many cheap hotels in the area. Together the latter formed the Tenants and Owners in Opposition to Redevelopment (TOOR). Their demand was to be rehoused in the area in low-rent housing. The case went to court where the judge, Stan Weigel, judged in favor of TOOR. [4] Things changed with the election of a new city mayor, George Moscone, in 1976, who spearheaded construction. The Gardens was later built as part of a deal by Mayor Moscone with developers to "set aside land and funds for cultural institutions such as museums, exhibits, and theaters." [5]

Walkways in Yerba Buena Gardens (with SFMOMA in the background)

In 1999 the Yerba Buena Gardens received the Gold Medal of the biannual Rudy Bruner Award for Urban Excellence. [6] In praising the design of the work, the jury noted the process that led to the creation of the gardens, as well as its inclusiveness in terms of the population it serves and its neighborhood: "The mixed-use development enables cultural, social justice, and economic development agendas to coexist within a network of collaborative management practices." [7] Furthermore, the jury "applauded the evolution of the project's development process to an inclusive model involving multiple constituencies." However, in his history of the development of San Francisco from the 1950s to the 1990s Chester Hartman recounts that the entire Yerba Buena project was long drawn out over 3 decades, born of a local struggle that included evictions and harassment of the previous tenants in the area, most of them old and poor, but who had joined together to fight for their rights. Even during the final design stages there were struggles regarding the building program. On hearing that the bowling alley was to be removed from the program, John Elberling, of the Tenants and Owners Development Corporation (TODCO), testifying at a San Francisco Development Agency (SFRA) hearing stated: "That's your fun, to go to gala openings at the Museum of Modern Art and the galleries, dress up in black tie and evening gowns, enjoy the boutique wines and rub shoulders with the City's social elite. But what about the kids of the central city?... A Redevelopment Agency that hands out free land for art museums for the wealthy in Yerba Buena but can't find funding for a bowling center too has no moral values..." Consequently, the SFRA backed down from its plan and the bowling alley was re-included and eventually built. [7] 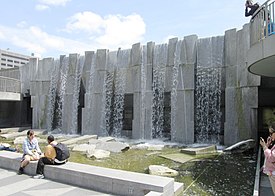 Conwill said the memorial is “a sacred space … meant to be experienced as a cultural pilgrimage and a journey of transformation.” The act of entering the Fountain from the Garden, reading of the text from North wall to East then, South Wall while beneath the water, then exiting back out into the garden, represents 'a cultural pilgrimage and contemplative metaphorical journey of transformation,' parallel to the Southern tradition of baptism by full immersion in water common within Old School Baptist churches like those of King's grandfather, legendary minister Adam Daniel Williams. On the terrace level above the waterfall is the Sister Cities Garden, where visitors can see an expertly manicured garden with plants representing each of San Francisco's sister cities, as well as a partial view of the downtown skyline. 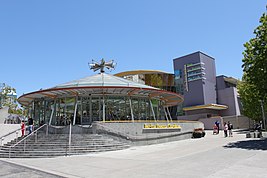 Located in the Gardens proper are the Yerba Buena Center for the Arts, a contemporary arts center in the North block, and the Children's Creativity Museum (Zeum), a children's media and technology museum in the South block. An ice skating rink, a bowling alley, and a restored 1906 carousel by Charles I. D. Looff [8] originally located at Playland-at-the-Beach[ citation needed] can also be found in the South block. Eateries within the gardens include the B Restaurant and Grill and the Samovar Tea Lounge on the North block's terrace, Mo's Grill on the South block's upper walkway, and a snack shop by the carousel.

The Mexican Museum is (as of 2015) planned to be built across Mission Street as part the 53-story Yerba Buena tower, which will consist mostly of luxury condominiums. [9] The project is planned to cost $500 million ($30 million of which for the museum) and will complete the "Yerba Buena district" redevelopment area, which apart from the Yerba Buena Gardens includes the Metreon and Moscone Center. [9]