The university evolved out of the literary reading groups of the San Francisco Central YMCA at a time when, according to one contemporary estimate, only one of every two thousand men had a college education. [5] GGU shares its YMCA roots with a number of other U.S. universities, including Capital University Law School, Michigan State University College of Law, Northeastern University (Boston, Massachusetts), Northern Kentucky University Salmon P. Chase College of Law, Roosevelt University, South Texas College of Law, University of Toledo College of Law, Western New England University, and Youngstown State University. On November 1, 1881 at the YMCA building at 232 Sutter Street, which the organization had occupied since 1868, the YMCA Night School was established. Classes were offered in bookkeeping, mathematics, stenography, elocution, Spanish and gymnastics. [6] Successful completion of these courses led to a certificate that was recognized by more than 100 colleges and trade schools. Other offerings of the association would include a common school for boys. In April 1894 the YMCA moved to a new five-story building at the northeast corner of Mason and Ellis Streets. [7] 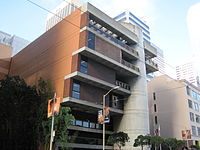 The night school was renamed the Evening College on October 1, 1896, and became a full-fledged operation in 1901 with the creation of a law school. The law school was the first of the Y's educational departments to offer a full degree-level course, and thus the university traces its founding to the law school's establishment. Courses in Accountancy and Business Administration leading to the degree of Bachelor of Commercial Science began in 1908. Later, courses in foreign trade were added. The YMCA building was destroyed in the fire that followed the 1906 earthquake. Following the earthquake, the school was conducted out of tents, and later leased space at 1220 Geary St. (now Geary Boulevard near Franklin Street in the Western Addition). In November 1910 the school moved into the YMCA's new building (closed in 2009) at 220 Golden Gate Avenue at Leavenworth Street, in the Tenderloin neighborhood. [8]

A student contest in 1927 resulted in the adoption of the new name Golden Gate, originally suggested by law student Charles H. Pool, Jr. (1895–1977) (LLB 1925) because contest judges thought it symbolized "romantic California." [9] The institution was separately incorporated from the Central YMCA on May 18, 1923, as Golden Gate College with the power to confer degrees as California law then provided. [10] The college became fully independent of the YMCA in 1962; however, the "Y" contributed members to the school's Board of Trustees for some time thereafter. [11]

The college continued to share the YMCA's building until June 1968, when it moved into the Allyne Building, a warehouse at 536 Mission Street originally built in 1924 as the showroom and wholesale department of Sherman Clay, a large retailer of pianos, records, record players, and other musical instruments. [12] The college had purchased the building at auction in April 1964, and the Law School had occupied the first two floors since December 1964. [13] [14]

In 1972, the college expanded and elevated itself to university status. In 1979, a new "west wing" of the university was completed, where most of the classroom space is located today.

Golden Gate University is primarily a post-graduate institution focused on professional training in law and business, with its smaller undergraduate programs linked to its larger graduate and professional schools.

Its five schools, with the year a university degree was first offered in the academic discipline, are as follows:

Prominent former trustees have included Curtis D. Wilbur, U.S. Secretary of the Navy under Calvin Coolidge. John L. McNabb, a former United States Attorney for the Northern District of California; Warren H. Pillsbury, an expert in the federal law of workers compensation (Governor 1923-1949, Trustee 1949-1963); James E. Hammond, a partner with what is now PricewaterhouseCoopers (Governor 1923-1949, Trustee 1949-1968); George Christopher, a former Mayor of San Francisco; and Caspar Weinberger, an executive with Bechtel and a U.S. Secretary of Defense.

Day-to-day operation of the university is in the hands of a president, five vice-presidents and the deans of the four schools (Accounting, Business, Law and Taxation).

Prior to 1948, the top executive was called the Director of Education.

Golden Gate University has been accredited on an institution-wide basis by the Western Association of Schools and Colleges (WASC) since 1959. It had previously been accredited by what is now the Northwest Commission on Colleges and Universities since 1950. [20] Additionally, the School of Law has been accredited by the American Bar Association (ABA) since August 1956 and the Committee of Bar Examiners of the State Bar of California since 1940 (standards for accreditation having been adopted in 1937). [21] The Law School is also a member of the Association of American Law Schools (AALS). The university's financial planning program is registered with the Certified Financial Planner Board of Standards [22] and students completing either the masters in Financial Planning or the graduate certificate in financial planning qualify to sit for the Certified Financial Planner (CFP) certification exam. 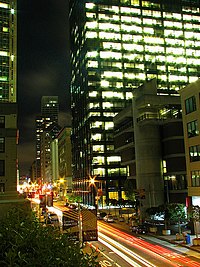 The GGU campus is located in the Financial District of San Francisco. It maintains satellite teaching/learning sites in the following locations:

Roughly 67 percent of students who attend Golden Gate University are in graduate business programs, 12 percent are in undergraduate programs and 21 percent are law students. In 2019, more than 80% of the student population comes from South, and South-Cenral Asia.