From Wikipedia, the free encyclopedia
‹ The template Infobox building is being considered for merging. ›

San Francisco City Hall is the seat of government for the City and County of San Francisco, California. Re-opened in 1915 in its open space area in the city's Civic Center, it is a Beaux-Arts monument to the City Beautiful movement that epitomized the high-minded American Renaissance of the 1880s to 1917. The structure's dome is taller than that of the United States Capitol by 42 feet. [8] The present building replaced an earlier City Hall that was destroyed during the 1906 earthquake, which was two blocks from the present one. It was bounded by Larkin Street, McAllister Street, and City Hall Avenue (a street, now built over, which ran from the corner of Grove and Larkin to the corner of McAllister and Leavenworth), largely where the current public library and U.N. Plaza stand today.

The principal architect was Arthur Brown, Jr., of Bakewell & Brown, whose attention to the finishing details extended to the doorknobs and the typeface to be used in signage. Brown's blueprints of the building are preserved at the Bancroft Library at the University of California, Berkeley. Brown also designed the San Francisco War Memorial Opera House, Veterans Building, Temple Emanuel, Coit Tower and the Federal office building at 50 United Nations Plaza. 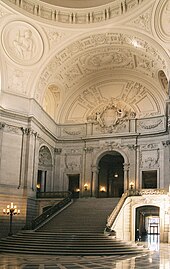 Interior stairs lead to the Board of Supervisor's meeting chamber

The building as a whole contains 7,900 tons (7,035 metric tons) of structural steel from the American Bridge Company of Ambridge, Pennsylvania near Pittsburgh. It is faced with Madera County granite on the exterior, and Indiana sandstone within, together with finish marbles from Alabama, Colorado, Vermont, and Italy. Much of the statuary is by Henri Crenier. 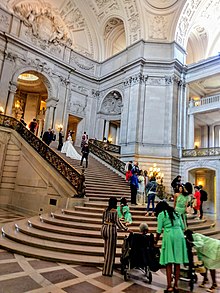 The grand staircase is a popular place for wedding gatherings

The Rotunda is a spectacular space and the upper levels are public and handicapped accessible. Opposite the grand staircase, on the second floor, is the office of the Mayor. Bronze busts of former Mayor George Moscone and his successor, Dianne Feinstein, stand nearby as tacit reminders of the Moscone assassination, which took place just a few yards from that spot in the smaller rotunda of the mayor's office entrance. A bust of former county supervisor Harvey Milk, who was assassinated in the building was unveiled on May 22, 2008. [10] While hard to discern these days, the inscription that dominates the grand Rotunda and the entrance to the mayor's small rotunda, right below Father Time, reads:

The words were written by the previous Mayor Edward Robeson Taylor, and dedicated by Mayor James Rolph.

While plaques at the Mall entrance memorialize President George Washington's farewell address and President Abraham Lincoln's Gettysburg Address, the primary themes of the statuary are to the past mayors, with the dates of their terms in office. The medallions in the vaults of the Rotunda are of Equality, Liberty, Strength, Learning and, as memorialized in the South Light Court display, Progress. 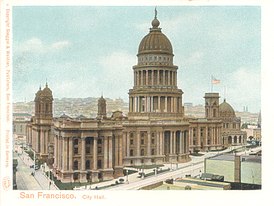 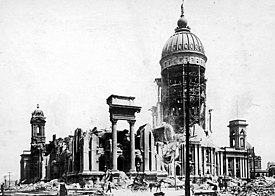 The current City Hall building is a replacement for the original building, which was designed by Augustus Laver and Thomas Stent[ citation needed] and completed in 1899 after 27 years of planning and construction. [12] The original city hall was a much larger building which also contained a smaller extension which contained the city's Hall of Records. Noted city planner and architect Daniel Burnham published a plan in 1905 to redesign the city, including a new Civic Center complex around City Hall, [13] but the plans were shelved in the wake of the 1906 San Francisco earthquake, which destroyed the 1899 City Hall.

Ever since the fire the ample ruins of the old city hall have been displayed to visitors. There is hardly a citizen that has not been embarrassed at some time or other by pertinent questions about our city hall.

Reconstruction plans following the earthquake for the Civic Center complex called for a neo-classical design as part of the city beautiful movement, as well as a desire to rebuild the city in time for the 1915 Panama-Pacific International Exposition. A bond was authorized for $8.8 million on March 28, 1912, of which the new City Hall was budgeted for $3.5 million to $4 million. [15] After Arthur Brown Junior's design was selected from the competition, construction started in 1913 and was completed by 1915, in time for the Exposition. [12]

Civic Auditorium (L) and New City Hall (R) under construction (circa 1916), with Civic Center Plaza in the foreground

The main rotunda served as the site where many prominent politicians and public servants laid in state. General Fredrick Funston, hero of the Spanish–American War, Philippine–American War, and the 1906 earthquake laid there in 1917. [21] Former mayor and governor James Rolph laid in state in City Hall following his death in 1934. [22]

Joe DiMaggio and Marilyn Monroe were married at City Hall in January 1954. [23]

In May 1960, the main Rotunda was a site of a student protest against the House Un-American Activities Committee and a countering police action whereby students from UC Berkeley, Stanford, and other local colleges were fire hosed down the steps beneath the rotunda. This event was memorialized by students during the Free Speech Movement at UC Berkeley four years later.

The Loma Prieta earthquake of 1989 damaged the structure, and twisted the dome four inches (102 mm) on its base. Afterward, under the leadership of the San Francisco Bureau of Architecture in collaboration with Carey & Co. preservation architects, and Forell/Elsesser Engineers, work was completed to render the building earthquake resistant through a base isolation system, [notes 1] which would likely prevent total collapse of the building. City Hall reopened after its seismic upgrade in January 1999, and was the world's largest base-isolated structure at that time. [24]

The city hall has attempted to recruit peregrine falcons to nest in aeries outside the dome. Pigeon droppings have to be periodically cleaned from the pair of glass-covered light wells that were covered with concrete at the height of modernism. The new city hall in nearby San Jose has already drawn at least one pair of falcons, discovered by Mayor Ron Gonzales himself as he saw pigeon feathers descend past a window during a meeting. [25]

The original grand plaza has undergone several extensive renovations, with radical changes in its appearance and utility. Prior to the 1960s there were extensive brick plazas, few trees, and a few large, simple, raised, and circular ponds with central fountains, all in a style that discouraged loitering. The plaza was then extensively excavated for underground parking. At this time a central rectangular pond, with an extensive array of water vents (strangely, all in several strict rows and all pointing east, with identical arcs of water, and completely without sculptural embellishment), was added, with extensive groves of trees (again, in 60s modernist style, planted with absolute military precision on rectangular grids). In the 1990s, with the rise of the problem of homelessness, the plaza was once again remodeled to make it somewhat less habitable—although the most significant change, the replacement of the pond and pumps with a lawn, could be reasonably justified on the basis of energy and water conservation. 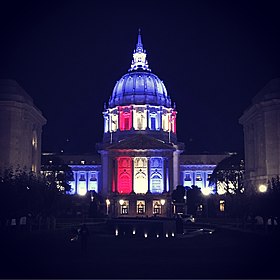 Martha Cohen, director of Special Events, has added color changeable LED lighting to the outside of the Rotunda, and between the exterior columns. The colors change to coincide with different events happening in the city and elsewhere.

The beauty of City Hall has not been lost on filmmakers working in San Francisco; many films have shot scenes in and around the building. Ironically, what may be the best-known scene was set in Washington, DC but filmed at San Francisco City Hall: in Raiders of the Lost Ark a late addition to the production was filmed in the rotunda when it was decided that a coda was needed for Indiana Jones and Marion Ravenwood's relationship. [26] The City Hall was also prominently featured throughout and famously at the end of Invasion of the Body Snatchers. [27] Dirty Harry filmed a key scene in the Mayor's office itself. [27] In the opening sequence of The Towering Inferno, the film's dedication is superimposed over a shot of City Hall, and the helicopter taking Paul Newman to the Glass Tower is shown flying over the building.

Other films that feature City Hall include:

The scene from A View to a Kill (the last James Bond film to star Roger Moore) is particularly memorable for the blaze which tore through the building as a result of an attempt to kill Bond and Stacey Sutton, however they managed to escape, stealing a fire truck in the process. [28]