The Presidio of San Francisco (originally, El Presidio Real de San Francisco or The Royal Fortress of Saint Francis) is a park and former U.S. Army military fort on the northern tip of the San Francisco Peninsula in San Francisco, California, and is part of the Golden Gate National Recreation Area. 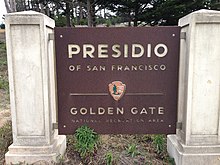 It had been a fortified location since September 17, 1776, when New Spain established the presidio to gain a foothold in Alta California and the San Francisco Bay. It passed to Mexico, which in turn passed it to the United States in 1848. [6] As part of a 1989 military reduction program under the Base Realignment and Closure ( BRAC) process, Congress voted to end the Presidio's status as an active military installation of the U.S. Army. On October 1, 1994, it was transferred to the National Park Service, ending 219 years of military use and beginning its next phase of mixed commercial and public use. [7]

In 1996, the United States Congress created the Presidio Trust to oversee and manage the interior 80% of the park's lands, with the National Park Service managing the coastal 20%. [8] In a first-of-its-kind structure, Congress mandated that the Presidio Trust make the Presidio financially self-sufficient by 2013. The Presidio achieved the goal in 2005, eight years ahead of the scheduled deadline. [9]

The park is characterized by many wooded areas, hills, and scenic vistas overlooking the Golden Gate Bridge, San Francisco Bay, and the Pacific Ocean. It was recognized as a California Historical Landmark in 1933 and as a National Historic Landmark in 1962. [5] [4]

The visitor centers are operated by the National Park Service:

Crissy Field Center (former Air Service/ Air Corps/ Army Air Forces airfield) is an urban environmental education center with programs for schools, public workshops, after-school programs, summer camps, and more. The Center is operated by the Golden Gate National Parks Conservancy and overlooks a restored tidal marsh. The facilities include interactive environmental exhibits, a media lab, resource library, arts workshop, science lab, gathering room, teaching kitchen, café and bookstore. [12] The landscape of Crissy Field was designed by George Hargreaves. The project restored a naturally functioning and sustaining tidal wetland as a habitat for flora and fauna, which were previously not in evidence on the site. It also restored a historic grass airfield that functioned as a culturally significant military airfield between 1919 and 1936. The park at Crissy Field expanded and widened the recreational opportunities of the existing 1 1⁄2-mile (2.4 km) San Francisco shore to a broader number of Presidio residents and visitors.

A major planned component of the Presidio's park attractions is the Tunnel Tops project, which would construct a 14-acre park (about the same size as Mission Dolores Park) on top of the tunneled portions of Doyle Drive. [13] [14] The park would contain several meadows and walking trails, along with viewpoints for major landmarks such as the Golden Gate Bridge. Negotiations between Caltrans, the San Francisco County Transportation Authority, and the Presidio Trust to finalize the land transfer for the park lasted from 2015 to 2018. [13] The budget for the park is $100 million, funded with public funds from the Presidio Trust along with private contributions. Construction for the park is planned to start in October 2018 and the park is slated to be open for public use in 2021. [13] [14] 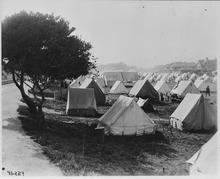 A refugee camp at the Presidio after the San Francisco earthquake 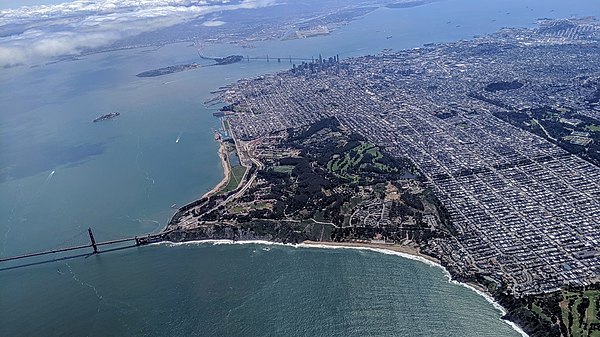 Aerial view of the Presidio from outside the Golden Gate, with downtown and Bay Bridge in the background 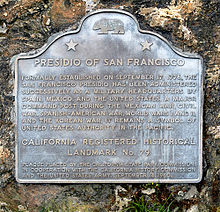 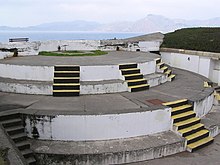 The Presidio was originally a Spanish fort sited by Juan Bautista de Anza on March 28, 1776, built by a party led by José Joaquín Moraga later that year. In 1783, the Presidio's garrison numbered only 33 men. Upon Mexican independence from Spain in 1821, it was briefly operated as a Mexican fortification.

The Presidio was seized by the U.S. military at the start of the Mexican–American War in 1846. It was officially re-opened by the Americans in 1848 and became home to several army headquarters and units, the last being the United States 6th Army. Several famous U.S. generals, such as William Sherman, George Henry Thomas, and John Pershing, made their homes here.

During its long history, the Presidio was involved in most of America's military engagements in the Pacific Rim. Importantly, it was the assembly point for army forces that invaded the Philippines during the Spanish–American War, America's first major military engagement in the region.

Beginning in the 1890s, the Presidio was home to the Letterman Army Medical Center (LAMC), named in 1911 for Jonathan Letterman, the medical director of the Civil War era Army of the Potomac. LAMC provided thousands of war-wounded with high quality medical care during every US foreign conflict of the 20th century.

One of the last two remaining cemeteries within the city's limits is the San Francisco National Cemetery. Among the military personnel interred there are General Federick Funston, hero of the Spanish–American War, Philippine–American War, and commanding officer of the Presidio at the time of the 1906 earthquake; and General Irvin McDowell, a Union Army commander who was defeated by the Confederates in the First Battle of Bull Run.

The Marine Hospital operated a cemetery for merchant seamen approximately 100–250 yards (91–229 m) from the hospital property. Based on city municipal records, historians estimate that the cemetery was in use from 1885 to 1912. [22] As part of the "Trails Forever" initiative, the Parks Conservancy, the National Park Service, and the Presidio Trust partnered to build a walking trail along the south side of the site featuring interpretive signage about its history. [23] 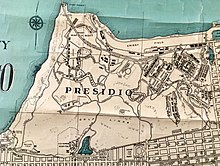 The Presidio was the home of the Western Defense Command headquarters during World War II. It was here that Lieutenant General John L. DeWitt signed 108 Civilian Exclusion Orders and directives for the Internment of Japanese Americans under the authority of Executive Order 9066 signed by President Franklin D. Roosevelt on February 19, 1942. [24]

After a hard-fought battle, the Presidio averted being sold at auction and came under the management of the Presidio Trust, a U.S. government corporation established by an act of Congress in 1996. [9] [25]

One of main objectives of the Presidio Trust's program was achieving financial self-sufficiency by fiscal year 2013, which was reached in 2006. Immediately after its inception, the Trust began preparing rehabilitation plans for the park. Many areas had to be decontaminated before they could be prepared for public use.

The Presidio Trust Act calls for "preservation of the cultural and historic integrity of the Presidio for public use." The Act also requires that the Presidio Trust be financially self-sufficient by 2013. These imperatives have resulted in numerous conflicts between the need to maximize income by leasing historic buildings, and permitting public use despite most structures being rented privately. Further differences have arisen from the divergent needs of preserving the integrity of the National Historic Landmark District in the face of new construction, competing pressures for natural habitat restoration, and requirements for commercial purposes that impede public access. As of 2007, there was only a rudimentary visitors' center to orient visitors to the Presidio's history.

Crissy Field, a former airfield, has undergone extensive restoration and now serves as very popular recreational area. It borders on the San Francisco Marina in the east and on the Golden Gate Bridge in the west.

The park has a large inventory of approximately 800 buildings, many of them historical. By 2004, about 50% of the buildings on park grounds had been restored and partially remodeled. The Presidio Trust has contracted commercial real estate management companies to help attract and retain residential and commercial tenants. The total capacity is estimated at 5,000 residents when all buildings have been rehabilitated. Among the Presidio's residents is The Bay School of San Francisco, a private coeducational college preparatory school located in the central Main Post area. Others include The Gordon and Betty Moore Foundation, Tides Foundation, the Arion Press, Sports Basement Presidio, and The Walt Disney Family Museum, a museum in the memory of Walt Disney. [26] Many various commercial enterprises also lease buildings on the Presidio, including Starbucks Coffee.

Sections of the Letterman Army Hospital were preserved by the Thoreau Center for Sustainability. [27]

The Presidio of San Francisco is the only U.S. national recreation area with an extensive residential leasing program.

The Presidio has four creeks that are currently being restored by park stewards and volunteers to expand the former extents of their riparian habitats. The creeks are Lobos and Dragonfly creeks, El Polin Spring, and Coyote Gulch. 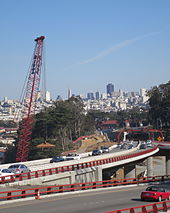 The Trust entered a major agreement with Lucasfilm to build a new facility called the Letterman Digital Arts Center (LDAC), which is now Lucasfilm's corporate headquarters. The site replaced portions of what was the Letterman Hospital. George Lucas won the development rights for 15 acres (6.1 ha) of the Presidio, in June 1999, after beating out a number of rival plans including a leading proposal by the Shorenstein Company. LDAC replaced the former Lucasfilm headquarters in San Rafael. The $300 million development includes nearly 900,000 square feet (84,000 m2) of office space and a 150,000-square-foot (14,000 m2) underground parking garage with a capacity of 2,500 employees. Lucasfilm's Industrial Light & Magic, Lucas Licensing, and Lucas Online divisions reside at the site. George Lucas's proposal included plans for a high-tech Presidio museum and a 7-acre (2.8 ha) "Great Lawn" that is now open to the public.

In 2007, Donald Fisher, founder of the Gap clothing stores and former Board member of the Presidio Trust, announced a plan to build a 100,000-square-foot (9,300 m2) museum tentatively named the Contemporary Art Museum of the Presidio, to house his art collection. Fisher's plan encountered widespread skepticism and even outright hostility amongst San Francisco preservationists, local residents, the National Park Service, the Presidio Trust, and city officials who saw the Presidio site as 'hallowed ground.' [28] Due to such criticism, Fisher withdrew his plans to build the museum in the Presidio and instead donated the art to the San Francisco Museum of Modern Art before his death in 2009. [29] [30] 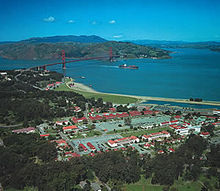 An aerial view of the Presidio

As the Doyle Drive viaduct was deemed seismically unsafe and obsolete, construction started on the demolition of Doyle Drive in 2008 to replace the structure with a flat, broad-lane highway with a tunnel through the bluffs above Crissy Field, called the Presidio Parkway. The project costs $1 billion and was scheduled to be completed by 2016. [31] [32]

The Trust plans to create a promenade that will link the Lombard gate and the new Lucasfilm campus to the Main Post and ultimately to the Golden Gate Bridge. The promenade is part of a trails expansion plan that will add 24 miles (39 km) of new pathways and eight scenic overlooks throughout the park.

In October 2008, artist Andy Goldsworthy constructed a new sculpture "Spire" in the Presidio. It is 100 feet (30 m) tall and located near the Arguello Gate. It represents the tree replanting effort that has been underway at the Presidio. [33]

In 2010, a trampoline park called House of Air was built using an old Aircraft Hangar. [34]