The San Francisco Recreation & Parks Department began in 1871 when city officials responding to residents' demands for a large public park established the Park Commission to oversee the development of Golden Gate Park. [2] As San Francisco grew over of the years, parks and facilities were added all over the city. Separately the city was running playgrounds, athletic fields, and recreational facilities under the direction of the Recreation Commission. In 1950 the two commissions were merged and the San Francisco Recreation & Park Department was born.

The General Manager is appointed by the mayor of San Francisco. General Manager Phil Ginsburg oversees a staff of over 850 that includes gardeners, foresters, natural resource, pest management and nursery specialists, recreation and summer camp staff, lifeguards, park patrol officers, carpenters, plumbers, electricians, metal shop/welders and painters plus many many more from the historic headquarters inside McLaren Lodge at the east end of Golden Gate Park. 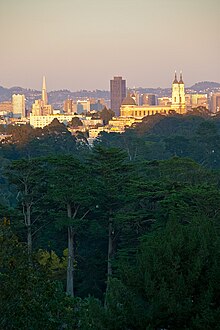 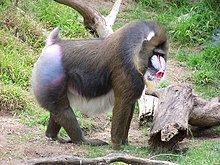 A mandrill at the San Francisco Zoo.

The Department is responsible for over 220 neighborhood parks and Golden Gate Park, the largest and the fifth most visited park in the United States. [6] The Golden Gate National Recreation Area is federal and is administered by the National Park Service.

Golden Gate Park is San Francisco's premier municipal park. Planted in 1871 the park covers 1,017 acres (412 ha) of land across the western edge of San Francisco. Configured as a rectangle the park is over three miles long east to west and about half a mile north to south. [7]

Coit Tower is a 210-foot (64 m) tower in the Telegraph Hill neighborhood. The tower, in the city's Pioneer Park, was built in 1933 using Lillie Hitchcock Coit's bequest to beautify the city of San Francisco. The tower was proposed in 1931 as an appropriate use of Coit's gift.

The Zoo is owned by the Recreation & Parks Department and managed by its partner non-profit San Francisco Zoological Society. [8]

Kezar Stadium is and outdoor 10,000 seat multi-purpose stadium located in the southeastern corner of Golden Gate Park. Before being renovated and downsized in 1989 it was the former home of the San Francisco 49ers and the Oakland Raiders. [9] The adjacent Kezar Pavilion is an indoor arena built in 1924 and seats 4,000.

View of the Golden Gate Bridge from the Marina Harbor.

The Palace of Fine Arts was retrofitted in 2009.

The Palace of Fine Arts in the Marina District is a monumental structure originally constructed for the 1915 Panama-Pacific Exposition in order to exhibit works of art presented there. One of only a few surviving structures from the Exposition, it is the only one still situated on its original site. It was rebuilt in 1965, and renovation of the lagoon, walkways, and a seismic retrofit were completed in early 2009.

Corona Heights Park is a 15-acre park in the Castro and Haight districts that commands a view of the city, downtown financial district and the bay. [13] The park features the Randall Museum, which focuses on science, nature and the arts and features live animals, and is operated by the Department.

The Recreation & Parks Department has 5 golf courses in San Francisco and Pacifica, California.

Camp Mather is an overnight summer family camp in Tuolumne County, California on Highway 120 near Yosemite National Park. [19] The 337-acre site is often referred to as the jewel of the department. [20] Before becoming a camp the site was used by the construction workers who built the O'Shaughnessy Dam and Hetch Hetchy Reservoir in the 1920s. [21]

The Department had 9 swimming pools spread all over the city. [22]