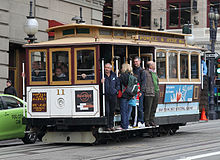 The culture of San Francisco is major and diverse in terms of arts, music, cuisine, festivals, museums, and architecture but also is influenced heavily by Mexican culture due to its large Hispanic population, and its history as part of Spanish America and Mexico. San Francisco's diversity of cultures along with its eccentricities are so great that they have greatly influenced the country and the world at large over the years. In 2012, Bloomberg Businessweek voted San Francisco as America's Best City. [1]

The Museum of Modern Art (SFMOMA) contains 20th Century and contemporary pieces. It moved to its building in South of Market in 1995 and attracts 600,000 visitors annually. [2] The California Palace of the Legion of Honor contains primarily European works. The De Young Museum and the Asian Art Museum have significant anthropological and non-European holdings. 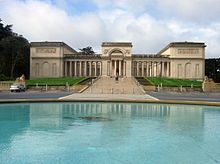 Palace of the Legion of Honor

The Palace of Fine Arts, a remnant of the 1915 Panama-Pacific Exposition, used to house the Exploratorium, a popular science museum dedicated to teaching through hands-on interaction, which moved to a new location on the Embarcadero in 2013. The California Academy of Sciences is a natural history museum and hosts the Morrison Planetarium and Steinhart Aquarium. The Asian Art Museum of San Francisco has one of the most comprehensive collections of Asian art in the world.[ citation needed] From 1958 until 2003 the collection was housed in a wing of at the original de Young in Golden Gate Park. When the de Young closed while constructing a new building, the Asian Art Museum moved to the former San Francisco City Library building, which was renovated for the purpose under the direction of Italian architect Gae Aulenti who had previously overseen the conversion of the Musée d'Orsay in Paris.

The red brick and central circular structure of the San Francisco Museum of Modern Art as seen from Yerba Buena Gardens. The Art Deco-style Pacific Telephone Building (1925) rises behind the museum.

The San Francisco Zoo cares for a total of about 250 animal species, 39 of which have been deemed endangered or threatened. [3]

The Haas-Lilienthal House (2007 Franklin Street) is the only intact private Victorian-era home in San Francisco that is open to the public year-round and available for private functions.

Classical and Opera venues in San Francisco include the San Francisco Symphony, the San Francisco Opera and the San Francisco Ballet. They all perform at the San Francisco War Memorial and Performing Arts Center. San Francisco's Ballet and Opera are some of the oldest continuing performing arts companies in the United States. San Francisco is the birthplace and home city of the vocal ensemble Chanticleer. The city is also home to the American Conservatory Theater, also known as A.C.T., which has been routinely staging original productions since its arrival in San Francisco in 1967. Additionally, the New Conservatory Theatre Center (NCTC) is known for being an intimate theater that routinely stages original productions by the local, national, and international LGBT community. Hundreds of smaller, alternative theatres also attract a significant portion of the audience given their historical role in the San Francisco performing arts culture. The oldest of these are Intersection for the Arts, founded in 1965, and the Magic Theatre, founded in 1967. A major player in the promotion of theater in the Bay Area is Theatre Bay Area (or TBA). A non profit organization, Theatre Bay Area has members from more than 365 Bay Area theatre and dance companies, is the publisher of Callboard Magazine, and runs San Francisco's Half-Priced Ticket Booth.

The Fillmore is a music venue located in the Western Addition. It is the second incarnation of the historic venue that gained fame in the 1960s under concert promoter Bill Graham, housing the stage where now-famous musicians such as the Grateful Dead, Janis Joplin, Led Zeppelin and Jefferson Airplane first performed, fostering the San Francisco Sound. Beach Blanket Babylon is a zany musical revue and a civic institution that has performed to sold-out crowds in North Beach since 1974. Bimbo's 365 Club, in North Beach, is one of the city's oldest entertainment venues and plays host to music shows of all genres.

San Francisco has a large number of theaters and live performance venues. Local theater companies have been noted for risk taking and innovation, [5] as documented in the film Stage Left: A Story of Theater in San Francisco. The Tony Award-winning non-profit American Conservatory Theater (A.C.T.) is a member of the national League of Resident Theatres, and has been in San Francisco since it moved from Pittsburgh in 1967. Other local winners of the Regional Theatre Tony Award include the San Francisco Mime Troupe, and Berkeley Rep in nearby Berkeley. [6] The Magic Theatre was the home theater of the playwright Sam Shepard during his most productive period, and many of his plays were first staged there. San Francisco-based SHN hosts productions of Broadway shows in its vintage 1920s-era venues in the Theater District: the Curran, Orpheum, and Golden Gate Theatres.

San Francisco has had a thriving improv theatre community, with a distinctly different style of improv than much of the rest of the country[ citation needed]. Unlike Chicago where one venue will host three 30-45 minute shows in one evening, most San Francisco improv shows are 2 hours long, complete with their own intermission. And while Chicago and New York are full of improv companies who perform formats based on the Harold (with multiple storylines going on at the same time), San Francisco is full of improv shows with single-story formats. Often referred to as play-length improv shows, these improv shows are rooted in the idea that if someone can perform something scripted (like a play, movie, or musical) then it can also be improvised just as well. Some groups that define the improvisation scene in San Francisco are: BATS Improv, The Un-Scripted Theater Company, and The San Francisco Improv Alliance.

San Francisco has often hosted influential rock music trends, starting with the San Francisco Sound during the 1960s. Two of the most influential bands from that era, the Grateful Dead and Jefferson Airplane, started out in San Francisco in 1965. Other groups include rockers Creedence Clearwater Revival, Santana, soft rock band Pablo Cruise and Journey, seminal punk band the Dead Kennedys, and alternative metal band Faith No More. It is the birthplace of thrash metal with bands such as Metallica, Testament, Exodus, Slayer, Death Angel, Megadeth and latterly Machine Head. Punk, electronica, industrial, goth, and rave activity 1980s and early 1990s, was also somewhat influential. Gentrification during the late 1990s is said to have forced many performers to move away.[ citation needed] However, San Francisco is home to a number of respected music acts, such as Chuck Prophet, Lords of Sealand and John Vanderslice, and especially in the Fillmore and Hunters Point districts, San Francisco is the home of numerous rappers, including Messy Marv, RBL Posse, Rappin' 4-Tay, HughEMC, San Quinn, Andre Nickatina, Big Rich, JT the Bigga Figga, Ant Rich 415, and Paris. San Francisco DJs and electronic musicians are credited with defining the laid-back, dub-influenced sound of the West Coast house music.[ citation needed] Prominent DJs and artists include Kaskade, Miguel Migs, Mark Farina, and DJ Garth. Dub Mission is among the city's regular music parties.

Comedian and actor, Robin Williams helped San Francisco become recognized as a good town for comedy clubs. He rose to fame, having gotten his early start in San Francisco clubs such as the Holy City Zoo, the Punchline and the Other Cafe in the '70's. [56] He also shot seven films on location in San Francisco. [56]

The city is the birthplace of the local variety of sourdough bread, the Mission burrito, and steam beer. Fisherman's Wharf has served local specialty Dungeness crab for decades. Food companies include Anchor Brewing Company, Boudin Bakery, the Ghirardelli Chocolate Company. Famous past and present restaurants include the Tonga Room, Fleur de Lys, Greens, Original Joe's, Stars, Vesuvio Cafe and the Top of the Mark. California Cuisine and fusion cuisine are prominent in the city. Food trucks are a source of ethnically diverse, and gourmet street foods, with concentrations of various trucks at regular times and places. [57] [58] Notable grocery stores, which often focus on locally-grown organic produce, include the Rainbow Grocery Cooperative and Bi-Rite Market. Johnny Kan opened one of the first modern Chinese restaurants, in Chinatown in 1953.

San Francisco is home to many different and unique street festivals, parties and parades. Most famous are its gay pride parade, held every June; the Folsom Street Fair held every September; Chinese New Year Parade held in February; Carnaval, held during the spring; Litquake and Hardly Strictly Bluegrass in October. It used to host a North American version of the Loveparade electronic music festival (later known as the "Lovefest" and " LoveEvolution"), held in late summer/early fall, until city officials revoked the event's permits due to safety concerns in 2009. [59] San Francisco is also home to running races such as the Bay to Breakers and the San Francisco Marathon. During Labor Day weekend in 2008, the city played host to the first Slow Food Nation, the first major public event for Slow Food USA and one of the largest food events in the nation.

Many neighborhoods in San Francisco have annual street festivals featuring live music, arts and crafts vendors, and community organizations. Among the largest of these are Castro Street Fair, Union Street Art Festival, North Beach Festival, and Haight-Ashbury Street Fair. The San Francisco Opera company puts on an annual free Opera in the Park performance in Golden Gate Park. The San Francisco Symphony does likewise on several dates in July, including one as part of the Stern Grove Festival. On the Fourth of July holiday, there are fireworks shows over Fisherman's Wharf and Marina Green. Another fireworks show is held every May as part of the KFOG: Kaboom!.

Coit Tower is a major landmark.

The Transamerica Pyramid, completed in 1972, has become an iconic symbol of the City.
Main article: San Francisco architecture

San Francisco contains a plethora of unique architecture that serve as tourist attractions in their own right. They include its Civic Center, Coit Tower atop Telegraph Hill, the Ferry Building on its waterfront, the world-renowned Golden Gate Bridge, the twisty and windy Lombard Street in Russian Hill, " Painted Ladies", terraced victorian houses that can be found citywide, the San Francisco cable car system, the abstract San Francisco Museum of Modern Art, the San Francisco–Oakland Bay Bridge, the ruins of the once great Sutro Baths, Chinatown, and the Transamerica Pyramid.

San Francisco has long been home to many different ethnicities and nationalities from around the world as well as sexual and gender identities, and have developed unique cultural neighborhoods (either naturally or through redlining) over its time.