The San Francisco Zoo is a 100-acre (40 ha) zoo located in the southwestern corner of San Francisco, California, between Lake Merced and the Pacific Ocean along the Great Highway. As of 2016, the zoo housed more than one thousand individual animals, representing more than 250 species. It is noted as the birthplace of Koko the gorilla, and, since 1974, the home of Elly, the oldest black rhinoceros in North America. [3]

The zoo's main entrance (once located on the north side across Sloat Boulevard and one block south of the Muni Metro L Taraval line) is to the west, on the ocean side.

Originally named the Fleishhacker Zoo [4] after its founder, banker and San Francisco Parks Commission president Herbert Fleishhacker, planning for construction began in 1929 on the site adjacent to what was once the largest swimming pool in the United States, the Fleishhacker Pool. [1] The area was also already home to a children’s playground, an original (circa 1921) Michael Dentzel/ Marcus Illions carousel, and the Mother’s Building, a haven for women and their children. Most of the exhibits were populated with animals transferred from Golden Gate Park, including two zebras, a cape buffalo, five rhesus monkeys, two spider monkeys, and three elephants (Virginia, Marjorie, and Babe).

The first exhibits built in the 1930s cost $3.5 million, which included Monkey Island, Lion House, Elephant House, a small mammal grotto, an aviary, and bear grottos. These spacious, moated enclosures were among the first bar-less exhibits in the country. In 1955, a local San Francisco newspaper purchased Pennie, a baby female Asian elephant, and donated her to the zoo after many children donated their pennies, nickels, and dimes for her purchase.

Over the next forty years, the Zoological Society became a powerful fundraising source for the San Francisco Zoo, just as Fleishhacker had hoped when he envisioned: "…a Zoological Society similar to those established in other large cities. The Zoological Society will aid the Parks Commission in the acquisition of rare animals and in the operation of the zoo."[ citation needed] True to its charter, the Society immediately exerted its influence on the zoo, obtaining more than 1,300 annual memberships in its first ten years (nearly 25,000 today). It also funded projects like the renovation of the Children’s Zoo in 1964, development of the African Scene in 1967, the purchase of medical equipment for the new zoo Hospital in 1975, and the establishment of the Avian Conservation Center in 1978.

In November 2004, Tinkerbelle, San Francisco Zoo's last Asian elephant, was moved to ARK 2000, a sanctuary run by PAWS- Performing Animal Welfare Society located in the Sierra Nevada foothills. She was later joined in March 2005 by the African elephant Lulu, the last elephant on display at the zoo. The moves followed the highly publicized deaths of thirty-eight-year-old Calle in March 2004, and forty-three-year-old Maybelle the following month. [5]

In early 2006, the SF Zoo announced its offer to name a soon-to-hatch American bald eagle after comedian Stephen Colbert. [6] The publicity and goodwill garnered from coverage of the event on the Colbert Report was a windfall for the zoo and the city of San Francisco.[ citation needed] Stephen Jr. was born on April 17, 2006.

Peafowl roam the zoo grounds freely and are acknowledged officially on the zoo's website. 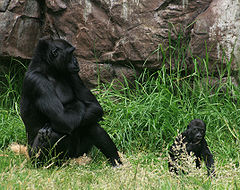 Tatiana, a Siberian tiger that escaped her cage and attacked three people, killing one.

On December 22, 2006, Tatiana, the 242-pound Siberian tiger, attacked zookeeper Lori Komejan, causing the keeper to be hospitalized for several weeks with lacerated limbs and shock. The Lion House was closed for ten months as a result. California's Division of Occupation Safety and Health found the zoo liable for the keeper's injuries, fined the zoo, and ordered safety improvements. [7] [8] [9]

On December 25, 2007, the same tiger escaped from her grotto and attacked three zoo visitors after being taunted and pummeled by sticks and pine cones by the visitors. Carlos Sousa, 17, of San Jose, California, was killed at the scene, while another taunter was mauled and survived. The tiger was shot and killed by police while hiding in the landscape after the attack. Three other tigers who shared Tatiana's grotto did not escape. [10] [11] Tatiana arrived at the San Francisco Zoo from the Denver Zoo in 2005, in hopes that she would mate. [12] (This "Tatiana" is not the same as the one successfully breeding in the Toronto Zoo.) According to the Association of Zoos and Aquariums, the attack is the first visitor fatality due to animal escape at a member zoo in the history of the organization. [13]

Two black bears were rescued as orphans in Alaska. The male was found on the edges of town near Valdez in May 2017 and the female cub was found near Juneau in June 2017. Both cubs were determined by the Alaska Department of Fish and Game to be motherless and were brought to Alaska Zoo and rehabilitated back to health. In 2017, the Alaska Zoo had more orphaned bear cubs than ever before, due to the repeal of bear hunting regulations by the Trump administration, which allowed for the hunting of hibernating bears in their dens. Mr. Lampi said. [14] [15] [16] The two bears were brought to the San Francisco Zoo in 2017 and a previously empty habitat was repurposed to host them. [17]

The zoo houses Henry, a 10-year-old blind Californian seal lion 7 which was found stranded on a beach in Humboldt County in 2010. In 2012, he was brought to the San Francisco Zoo, he was treated by veterinarians for his blindness. [18]

The San Francisco Zoo participates in Species Survival Plans, conservation programs sponsored by the Association of Zoos and Aquariums. The program began in 1981 for selected species in North American zoos and aquariums where the breeding of a species done to maintain healthy, self-sustaining, genetically diverse and demographically stable populations. [19] The zoo participates in more than 30 SSP programs, working to conserve species ranging from Madagascan radiated tortoises and reticulated giraffes to black rhinos and gorillas.