From Wikipedia, the free encyclopedia
Roman Catholic mission and a historic landmark in San Gabriel, California

Mission San Gabriel Arcángel ( Spanish: Misión de San Gabriel Arcángel) is a fully functioning Roman Catholic mission and a historic landmark in San Gabriel, California. The settlement was founded by Spaniards of the Franciscan order on "The Feast of the Birth of Mary," September 8, 1771, as the fourth of what would become twenty-one Spanish missions in California. [10] San Gabriel Arcángel, named after the Archangel Gabriel and often referred to as the "Godmother of the Pueblo of Los Angeles", [11] was designed by Antonio Cruzado, who gave the building its capped buttresses and the tall narrow windows, which are unique among the missions of the California chain.

A large stone cross stands in the center of the Campo Santo ( cemetery), first consecrated in 1778 and then again on January 29, 1939, by the Los Angeles Archbishop John Cantwell. It serves as the final resting place for some 6,000 "neophytes;" a small stone marker denotes the gravesite of José de Los Santos, the last American Indian to be buried on the grounds, at the age of 101 in February 1921. Also interred at the Mission are the bodies of numerous Franciscan priests who died during their time of service, as well as the remains of Reverend Raymond Catalan, C.M.F., who undertook the restoration of the Mission's gardens. Entombed at the foot of the altar are the remains of eight Franciscan priests (listed in order of interment): Miguel Sánchez, Antonio Cruzado, Francisco Dumetz, Roman Ulibarri, Joaquin P. Nunez, Gerónimo Boscana, José Bernardo Sánchez, and Blas Ordaz. Buried among the priests is centenarian Eulalia Perez de Guillén Mariné, the "keeper of the keys" under Spanish rule; her grave is marked by a bench dedicated in her memory.

According to Spanish legend, the founding expedition was confronted by a large group of native Tongva peoples whose intention was to drive the strangers away. One of the priests laid a painting of "Our Lady of Sorrows" on the ground for all to see, whereupon the natives, designated by the settlers as the Gabrieliños, immediately made peace with the missionaries, because they were so moved by the painting's beauty. [1] Today the 300-year-old work hangs in front of and slightly to the left of the old high altar and reredos in the Mission's sanctuary.

On July 11, 2020, the building sustained major damage in a fire. The cause of the fire is under investigation. [12]

In August 1771, a Portola expedition, which consisted of "ten Spanish soldiers and two Franciscan priests, encountered armed Tongva Indians on the banks of the Santa Ana River." [13] One month later, Mission San Gabriel was founded on September 8, 1771, by Fray Angel Francisco de Sonera and Fray Pedro Benito Cambon. The planned site for the Mission was along the banks of the Río de Los Temblores (the River of the Earthquakes—the Santa Ana River). The priests chose an alternate site on a fertile plain located directly alongside the Rio Hondo in the Whittier Narrows. [14] The site of the Misión Vieja (or "Old Mission") is located near the intersection of San Gabriel Boulevard and Lincoln Avenue.

In 1776, a flash flood destroyed much of the crops and ruined the original Mission complex, which was subsequently relocated five miles closer to the mountains in present-day San Gabriel (the Tongva settlement of 'Iisanchanga). The Tongva village of Shevaanga was located "close to the second location of Mission San Gabriel" after the original site was abandoned due to the flooding. [15]

On December 9, 1812 (the "Feast Day of the Immaculate Conception of the Blessed Virgin"), a series of massive earthquakes shook Southern California. The 1812 San Juan Capistrano earthquake caused the three-bell campanario, located adjacent to the chapel's east façade, to collapse. A larger, six-bell structure was subsequently constructed at the far end of the Capilla. While no pictorial record exists to document what the original structure looked like, architectural historian Rexford Newcomb deduced the design and published a depiction in his 1916 work The Franciscan Mission Architecture of Alta (upper) California.

Over 25,000 baptisms were conducted at San Gabriel between 1771 and 1834, making it the most prolific in the chain of missions. Tongva people from nearby settlements like Akuranga village were affected by the practices of Franciscan missionaries, who attempted to "eradicate what they perceived as ills within Tongva society" through "religious indoctrination, labor, restructuring of gender structures, and violence," which took place at and around the Mission. [13] 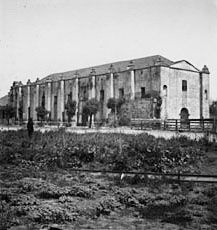 Mission San Gabriel Arcángel c. 1900. The trail in the foreground is part of the original El Camino Real.

Although San Gabriel once furnished food and supplies to settlements and other missions throughout California, a majority of the Mission structures fell into ruins after it was secularized in November 1834. The once-extensive vineyards were falling to decay, with fences broken down and animals roaming freely through it. [16]

The Mission's chapel functioned as a parish church for the City of San Gabriel from 1862 until 1908, when the Claretian Missionaries came to San Gabriel and began the job of rebuilding and restoring the Mission. In 1874, tracks were laid for Southern Pacific Railroad near the mission. In 2012, artifacts from the mission era were found when the tracks were lowered into a trench known as the Alameda Corridor-East. [17] On October 1, 1987, the Whittier Narrows earthquake damaged the property. A significant portion of the original complex has since been restored.

Fire completely destroyed the roof on top of the original church sanctuary on July 11, 2020. [18] Prior to the fire, the mission was undergoing renovation, saving some paintings and artifacts. [19] An investigation into the origin of the fire has since been opened. [20]

The goal of the missions was to become self-sufficient in relatively short order. Farming was the most important industry of any mission. Prior to the missions, the native-Americans had developed a complex, self-sufficient culture. The mission priests established what they thought of as a manual training school: to teach the Indians their style of agriculture, the mechanical arts, and the raising and care of livestock. The missions, utilizing the labor of the neophytes, produced everything they used and consumed. After 1811, the mission Indians could be said to sustain the entire military and civil government of California. [21]

To efficiently manage its extensive lands, Mission San Gabriel established several outlying sub-missions, known as asistencias. Several of these became or were included in land grants following the Mexican secularization of the missions in the 1830s, including:

In 1816, the Mission built a grist mill on a nearby creek. El Molino Viejo still stands, now preserved as a museum and historic landmark. Other mission industries included cowhide tanning/exporting and tallow-rendering (for making soap and for export), lime kilns, tile making, cloth weaving for blankets and clothing, and adobe bricks.

Bells were important to daily life at any mission. They were rung to mark mealtimes, to call the Mission residents to work and to religious services, to mark births and funerals, to signal the approach of a ship or returning missionary, and at other times; novices were instructed in the intricate rituals associated with the ringing of the mission bells. The mission bells were also used to tell time.

The actor Gil Frye portrayed Father Miguel Sanchez in a 1953 episode, "The Bell of San Gabriel," of the syndicated television anthology series, Death Valley Days, hosted by Stanley Andrews. As a child portrayed in the segment by Peter J. Votrian, Miguel provides funds acquired from a wealthy nobleman to sweeten the tone of the bell at Mission San Gabriel Arcángel. Years later, the ring of the bell saves his life when he is a young monk stranded in the desert in the Death Valley country. [24] 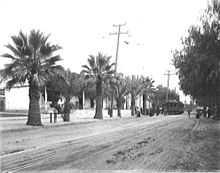 A streetcar of the Pacific Electric Railway makes a stop at Mission San Gabriel Arcángel c. 1905.

Visitors can tour the church, museum and grounds. The adobe museum building was built in 1812 and was originally used for sleeping quarters and book storage. [25] Exhibits include mission relics, books and religious artifacts. The grounds feature operations from the original mission complex, including indoor and outdoor kitchens, winery, water cisterns, soap and candle vats, tanning vats for preparing cattle hides, and a cemetery. There is also a gift shop.

As part of the William McPherson Collection in the Special Collections at the Claremont Colleges' Honnold/Mudd Library, the Matrimonial Investigation Records of the San Gabriel Mission are a valuable resource for research on the pre-statehood activities of the Mission. [26] William McPherson was a rancher, scholar, and collector from Orange County, California, who donated his extensive collection of mission documents, primarily from the Mission San Gabriel Arcángel, to Special Collections in 1964. [26] [27] The matrimonial records span 1788 to 1861 and are notarized interviews with couples wanting to marry in the Roman Catholic Church, performed to establish the couples' freedom to marry. [26] The collection includes 165 investigations, with 173 men and 170 women. [26] Because the donated records are fragile, they are no longer available to be photocopied. The California Digital Library has an online guide available to search the collection.