The Sunset District is an neighborhood located in the west-central area of San Francisco, California, United States.

The Sunset District is the largest neighborhood within the city and county of San Francisco.[ citation needed] Golden Gate Park forms the neighborhood's northern border, and the Pacific Ocean (or, more specifically, the long, flat strand of beach known as Ocean Beach) forms its western border. A section of the Sunset District towards its southeastern end is known as the Parkside neighborhood. [3] Prior to the residential and commercial development of the Sunset District, much of the area was covered by sand dunes and was originally referred to by 19th century San Franciscans as the " Outside Lands." [4]

The Sunset District and the neighboring Richmond District (on the north side of Golden Gate Park) are often collectively known as The Avenues, because the majority of both neighborhoods are spanned by numbered north-south avenues. When the city was originally laid out, the avenues were numbered from 1st to 49th, and the east-west streets were lettered A to X. In 1909, to reduce confusion for mail carriers, the east-west streets and 1st Avenue and 49th Avenue were renamed. The east-west streets were named in ascending alphabetical order in a southward direction after prominent 19th-century American politicians, military leaders, or explorers; 19th-century Mexican landowners; and Spanish conquistadors. 1st Avenue was renamed Arguello Boulevard, and 49th Avenue was renamed La Playa Street (Spanish for "the beach"). [5]

Today, the first numbered avenue is 2nd Avenue, starting one block west of Arguello Boulevard, and the last is 48th Avenue near Ocean Beach. The avenue numbers increase incrementally, with one exception: what would be 13th Avenue is known as Funston Avenue, named after Frederick Funston, a U.S. Army general known for his exploits during the Spanish–American War and Philippine–American War, and for directing the U.S. Army response to the 1906 earthquake.

The east-west streets in the Sunset appear mostly in alphabetical order. These streets are: Lincoln Way (bordering the south side of Golden Gate Park), Hugo (from Arguello to 7th Avenue only), Irving, Judah, Kirkham, Lawton, Moraga, Noriega, Ortega, Pacheco, Quintara, Rivera, Santiago, Taraval, Ulloa, Vicente, Wawona, Yorba, and Sloat Boulevard. "X" was originally proposed to be Xavier, but was changed to Yorba due to a pronunciation controversy. [5][ dead link]

The origin of the "Sunset" name is not entirely clear. One claim indicates that Aurelius Buckingham, a developer who owned property in the area, coined the term in 1886. Another claim comes from the California Midwinter Exposition, held in Golden Gate Park in 1894 and also known as "The Sunset City." [4]

Before construction of the Twin Peaks Tunnel in 1917, the Sunset was a vast, sparsely inhabited area of large sand dunes and coastal scrub land known as the "Outside Lands." Development was initiated in the 1870s and 1880s with construction of Golden Gate Park, but it did not reach a full scale until after the 1906 San Francisco earthquake, when small lots of tract homes and row homes now characteristic of the neighborhood were built into the sand dunes. [6] These tract homes would displace a smaller original settlement built into the dunes called Carville, which was so named for squatters that lived in abandoned horsecars (horse-drawn trolleys) and cable cars that were dumped in the sand dunes. [7] Development increased by the 1930s, as the Sunset was built and developed into a streetcar suburb. The post–World War II baby boom in the 1950s saw the last of the sand dunes leveled down and replaced with more single- and multifamily homes. In these developments, built mostly by Henry Doelger, entire blocks consist mainly of houses of the same general character, differentiated by variations in their stucco facades and mirrored floorplans, with most built upon 25-foot-wide (7.6 m) lots with no free space between houses. Later, Oliver Rousseau built more individualistic homes in the district. [8]

Historically, the Sunset has been an Irish and Italian ethnic enclave. [9] Beginning in the late 1960s the neighborhood saw a steady influx of Asian (mostly Chinese) immigrants following the Immigration and Nationality Act of 1965 which lifted racial quotas allowing for more non-European nationals to immigrate to the United States. Additionally, the Handover of Hong Kong motivated many Chinese to immigrate to the U.S. due to the political and economic uncertainties.[ citation needed] In 1999, around 60% of the homeowners in the Sunset and Richmond districts were Chinese. [9] 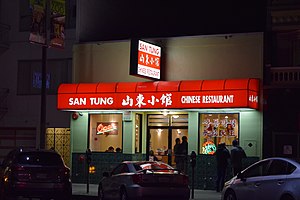 The Inner Sunset is bordered by Lincoln Way to the north, 2nd Ave to the east, Quintara Street to the south, and 19th Avenue to the west. This far-east section of the Sunset is located just west of Mount Sutro. The main commercial area is along Irving Street from 5th Avenue to 12th Avenue, and along 9th Avenue from Lincoln Way to Judah Street, much of which is dotted with a variety of restaurants and shops.

The Central Sunset is bounded by Lincoln Way to the north, 19th Avenue to the east, Quintara Street to the south, and Sunset Boulevard to the west. This area is mostly residential with cookie-cutter homes and large lots and a commercial strip along Irving Street from 19th Avenue to 24th Avenue and on Noriega Street from 19th Avenue to 27th Avenue and 30th Avenue to 33rd Avenue. Features of the area include the Sunset Reservoir (which takes up eight square blocks between Ortega and Quintara streets and 24th and 28th avenues), which has a small park surrounding its outer rim; Golden Gate Park; the Sunset Recreation Center; and Abraham Lincoln High School.

The Outer Sunset is bordered by Lincoln Way to the north, Sunset Boulevard (between 36th and 37th avenues) to the east, Sloat Boulevard to the south, and Ocean Beach to the west. The primary commercial avenues are Judah, Noriega, and Taraval. The Outer Sunset is the foggiest section in San Francisco due to its close proximity to Ocean Beach. The area's main attractions include the San Francisco Zoo, Golden Gate Park, Ocean Beach, and Lake Merced.

The commercial area on 9th Avenue and Irving Street has become a lively nightlife spot.

The western part of the Sunset borders the cold northern California Pacific Ocean coastline, so it tends to get much of the fog San Francisco is famous for. The Sunset can be foggy and chilly for some days during summer. The Sunset's finest weather is usually from August through December, when regional air patterns transition from onshore to offshore weather and the area is free of fog. Sand carried by Pacific Ocean winds can be found on roadways and driveways within the first five to ten blocks east of Ocean Beach.

The Sunset District contains several large park and recreation areas. The San Francisco Zoo is located in the southwestern corner of the neighborhood by Lake Merced, the largest lake within San Francisco. Also within the Lake Merced area are several golf courses: the private Olympic Club and San Francisco Golf Club, and the public TPC Harding Park. Across from Lake Merced is Fort Funston, an old coastal battery, now part of the Golden Gate National Recreation Area. Fort Funston notably has some of the last remnants of the sand dune ecosystem that once covered the entire Sunset District.

There is a year-round, Sunday morning farmers' market which is located at 1315 8th Avenue (the parking lot between 8th and 9th Avenues). The market is operated by the Pacific Coast Farmers' Market Association and is sponsored by the Inner Sunset Park Neighbors. [12] The Inner Sunset Farmers' Market offers California-grown produce, fish, eggs, and meat, as well as local food vendors and artisans.

Stern Grove, a heavily wooded park and amphitheater located on Sloat Boulevard between 19th and 34th avenues, is known for its annual summer festival.

Three parks lie on the far east border of the district: the northernmost is Grand View Park (also referred to as Turtle Hill) a small, elevated park [13] surrounded by 14th and 15th Avenues, as well as Noriega Street; moving south, next is Golden Gate Heights Park, just east of 14th Avenue north of Quintara; and Hawk Hill Park, also east of 14th Avenue at Santiago. These natural areas belong to a remnant ridge-top system and include some of the last-remaining sand-dune communities in the city. [14]

Educational institutions include the Parnassus campus and medical center of the University of California, San Francisco, located in Inner Sunset; the main campus of San Francisco State University, located in the southwestern corner of the neighborhood across from Lake Merced; Abraham Lincoln High School, located in the center of the Sunset District; St. Ignatius College Preparatory (a private, coeducational school operating in San Francisco since 1855) located since 1969 adjacent to Sunset Boulevard; and Lowell High School, the oldest public high school west of the Mississippi and one of the top performing ones in the United States. [15]

The strip near the Pacific Ocean has a notable population of surfers who take advantage of the sometimes excellent surf conditions of Ocean Beach. Because of the cold Pacific current that brings ocean water from Alaska, it is usually necessary to wear a wetsuit when surfing at Ocean Beach. Several surf shops can be found near the beach in the Outer Sunset.

Like much of the coast of Northern California, Sunset district has a cool summer mediterranean climate, albeit with an unusual annual temperature distribution. The warmest days of the year occur in October and then the coldest nights of the year occur just two months later in December. Its climate is strongly influenced by the Pacific Ocean and therefore has even cooler summers and milder winters than downtown San Francisco. Rainfall follows a seasonal pattern with plentiful precipitation in the winter (almost all of this falling as rain) and extremely dry albeit foggy summers. [16]