San Mateo County was formed in 1856 upon the division of San Francisco County, one of the state's 18 original counties established at California statehood in 1850. Until 1856, San Francisco's city limits extended west to Divisadero Street and Castro Street, and south to 20th Street. In 1856, the California state government divided the county. A straight line was then drawn across the tip of the San Francisco Peninsula just north of San Bruno Mountain. Everything south of the line became the new San Mateo County while everything north of the line became the new consolidated City and County of San Francisco. [6] San Mateo County was officially organized on 18 April 1857 under a bill introduced by Senator T.G. Phelps. The 1857 bill defined the southern boundary of San Mateo County as following the south branch of San Francisquito Creek to its source in the Santa Cruz Mountains and thence due west to the Pacific Ocean, and named Redwood City as the county seat. [7] San Mateo County then annexed part of northern Santa Cruz County in March 1868, including Pescadero and Pigeon Point. [8] [7]

San Mateo County bears the Spanish name for Saint Matthew. As a place name, San Mateo appears as early as 1776 in the diaries of Anza and Font. [10] Several local geographic features were also designated San Mateo on early maps including variously: a settlement, an arroyo, a headland jutting into the Pacific ( Point Montara), and a large land holding ( Rancho San Mateo). Until about 1850, the name appeared as San Matheo.

The Japanese first arrived in San Mateo County and were part of a group guided by Ambassador Tomomi Iwakura back in 1872. [11] There were a number of all male Japanese students who came to San Mateo to learn English and many other helpful skills to bring back to Japan. [12] These students were also some of the first Japanese to join American students in the Belmont school for boys. These students had to work for their housing and food before classes and in the evenings. [12] Many of the first Japanese immigrants were able to find jobs as gardeners and landscapers In San Mateo. Most of them had good educational background from their homelands, but their lack of knowing the English language made it difficult for them to find other jobs in the beginning. [13]

According to the U.S. Census Bureau, the county has a total area of 741 square miles (1,920 km2), of which 448 square miles (1,160 km2) is land and 293 square miles (760 km2) (40%) is water. [14] It is the third-smallest county in California by land area. A number of bayside watercourses drain the eastern part of the county including San Bruno Creek and Colma Creek. Streams draining the western county include Frenchmans Creek, Pilarcitos Creek, Naples Creek, Arroyo de en Medio, and Denniston Creek. These streams originate along the northern spur of the Santa Cruz Mountains that run through the county. The northern and north-east parts of the county are very heavy densely populated with largely urban and suburban areas, with many of its cities as edge-cities for the Bay Area, whilst the deep south and the west central parts of the county are less densely populated with more rural environment and coastal beaches areas. 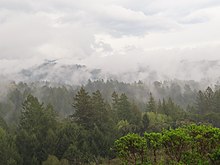 The Santa Cruz Mountains cross through San Mateo County. In comparison to the rest of the county, the area is quite rural and forested.

The county is home to several endangered species including the San Francisco garter snake and the San Bruno elfin butterfly, both of which are endemic to San Mateo County. The endangered California Ridgway's Rail is also found on the shores of San Francisco Bay, in the cities of Belmont and San Mateo. The endangered wildflower Hickman's potentilla is found near the Pacific Ocean on the lower slopes of Montara Mountain. The endangered wildflowers White-rayed pentachaeta, Pentachaeta bellidiflora, San Mateo Woolly Sunflower, Eriophyllum latilobum, Marin Dwarf Flax, Hesperolinon congestum and the San Mateo Thornmint, Acanthomintha duttonii, are found in the vicinity of the Crystal Springs Reservoir.

In May 2014, a California condor was spotted near Pescadero, a coastal community south of San Francisco [15]—it was the first California condor spotted in San Mateo County since 1904. [15] The Condor, tagged with the number "597," and also known as "Lupine", is one of 439 condors living in the wild or captivity in California, Baja California and Arizona. [15] [16] The three-year-old female flew more than 100 miles (160 km) north from Pinnacles National Park, in San Benito County, on May 30, and landed on a private, forested property near Pescadero, on the San Mateo County Coast, where it was photographed by a motion-activated wildlife camera. [15] Harold Heath, Professor Emeritus, of Stanford University was responsible for the 1904 sighting, 1 mile (1.6 km) west of the University campus. [15] [17]

Tule elk (Cervus canadensis nannodes) were native to San Mateo County and among the "favored foods" of the Ohlone people based on ethnohistoric and archeological evidence there. [19] The discovery of two elk specimens made news in 1962, one a royal elk (royal elk bulls have 6 tines per antler) from a peat bog excavated in Pacifica's historic Laguna Alta, and now in the Museum of Vertebrate Zoology collection. [20] [21] These may date from the time of Spanish settlement. [22] Laguna Alta lay just south of the Interstate 280 and Skyline Boulevard intersection, east of Mussel Rock. [23] The California Academy of Sciences also has an elk skull fragment collected one mile inland from the mouth of Purisima Creek in 1951. [24] Additional coastal elk remains dating from the Middle and Late Periods in Northern California were found in at least five more late Holocene archeological sites in San Mateo County: SMA-115 ( Montara State Beach site), SMA-118 ( Bean Hollow State Beach site), SMA-244 ( Butano Ridge site), SMA-97 ( Año Nuevo Creek site) and SMA-218 (Año Nuevo State Reserve site). [25] On the eastern side of the San Francisco Peninsula, elk remains were also unearthed at multiple archaeological sites along San Francisquito Creek. [26] [27]

Prior to the rebuilding of the San Mateo Bridge that began in 1996, the county had also operated Werder Pier for fishermen; it had been the western segment of the original 1929 vertical-lift bridge.

As of 2012, San Mateo County had one of the largest Tongan communities outside of Tonga, with an estimated 13,000 Tongan Americans. [51] 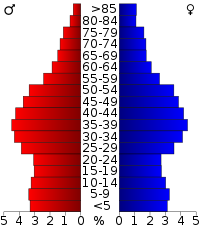 San Mateo County has a five-member Board of Supervisors, representing five geographic districts, elected at-large until November 2012. On November 6, 2012, Measure B passed [67] to amend the San Mateo County Charter so that each member of the Board of Supervisors will cease to be elected by an at-large vote of all the voters in the County, but is instead elected only by the voters of his or her district. [68]

In the California State Senate, San Mateo is split between the 11th and 13th districts, represented by Scott Wiener and Jerry Hill, respectively. [71]

Historically, San Mateo County was a Republican stronghold in presidential elections. From 1880 until 1988, the only Democrats to carry San Mateo County were Woodrow Wilson, Franklin Roosevelt, Lyndon Johnson, and Hubert Humphrey. Like virtually all counties in the Bay Area, San Mateo today is a strongly Democratic county in presidential and congressional elections. The last Republican to win a majority in the county was Ronald Reagan in 1984.

A July 2013 Wall Street Journal article identified the Facebook initial public offering (IPO) as the cause of a change in the U.S.' national economic statistics, as San Mateo County—the home of the company—became the top wage-earning county in the country after the fourth quarter of 2012. The article revealed that the Bureau of Labor Statistics reported that the average weekly wage in the county was US$3,240, which is 107% higher than the previous year: "That’s the equivalent of $168,000 a year, and more than 50% higher than the next highest county, New York County (better known as Manhattan), which came in at $2,107 a week, or roughly $110,000 a year." [79]

In 2016, Peninsula Clean Energy began providing electricity to 20 percent of residential customers, all municipalities, and all small- to mid-size businesses in the county, as a Community Choice Aggregation program, an alternative to Pacific Gas and Electric. [80]

The people of San Mateo county may use the services of San Mateo County Libraries along with the Peninsula Library System and its dozens of branches, bookmobile and Library-a-Go-Go machine at the Millbrae BART/Caltrain station.

The county is broken up into several public school districts in addition to the local Catholic diocese and many other private parochial and secular schools. The San Mateo County Board of Education oversees early education, special education, and the court and community schools program in the county, as well as serves as an appeal board for the adjudication of expulsion appeals, interdistrict attendance appeals, and Charter Schools.

Caltrain, the commuter rail system, traverses the county from north to south, running alongside the Highway 101 corridor for most of the way.

Caltrain, BART, and SamTrans converge at the Millbrae Intermodal station.

San Francisco International Airport is geographically located in San Mateo County, but it is owned and operated by the City and County of San Francisco.

The only deepwater port in South San Francisco Bay is the Port of Redwood City, situated along Redwood Creek, originally created as a lumber embarcadero in 1850. The San Mateo Harbor Harbor District manages the Pillar Point Harbor and Oyster Point Marina. Ferry connections connect Oyster Point to Jack London Square in Oakland and the Alameda Ferry Terminal in Alameda.

There are a number of well known structures within San Mateo County:

The population ranking of the following table is based on the 2010 census of San Mateo County. [84]