From Wikipedia, the free encyclopedia
For the writer, see Rubén Gallego.
American politician

Ruben Marinelarena Gallego /ˈruːbən ˌɡaɪˈɛɡoʊ/ (born November 20, 1979) is an American politician who is the U.S. Representative for Arizona's 7th congressional district. A Democrat, he previously served as a member of the Arizona House of Representatives, serving as assistant minority leader in the Arizona House of Representatives from 2012 until his resignation to run for Congress. Gallego was elected to Congress in the 2014 midterm congressional elections. His district includes most of southern, western, and downtown Phoenix, along with a portion of Glendale. He served as the National Chair of Eric Swalwell’s 2020 Presidential Campaign.

Gallego was born in Chicago [1] and is a first generation American with a Colombian mother and a Mexican father. [2]

Along with his three sisters, he was raised by a single mother. [3] The family eventually moved to Evergreen Park, Illinois, and he graduated from Evergreen Park Community High School. [4]

Gallego attended Harvard College, where he was a member of Sigma Chi. [5]

After college, Gallego joined the Marines. After completing infantry training, he deployed to Iraq with Lima Company, 3rd Battalion, 25th Marine Regiment. 3/25 would lose 46 Marines and two Navy corpsmen between January 2005 and January 2006, according to the Marine Corps official website. [3]

Gallego lost his best friend in combat in Iraq. [3] His desire to help fellow veterans motivated the formerly apolitical Gallego to get involved with politics. [6]

In 2011, he was named as a distinguished freshman lawmaker by The Arizona Republic. [7] Gallego's first successful bill granted in-state tuition status to veterans residing in Arizona. [3] Gallego supports the repeal of Arizona SB 1070. He considers education to be the most important long-term priority for Arizona. [8] In 2012, Gallego was elected assistant minority leader. [9]

He founded the group Citizens for Professional Law Enforcement, with the goal of recalling Maricopa County Sheriff Joe Arpaio. Gallego cited Arpaio's immigration policies and his use of taxpayer money to investigate Barack Obama's citizenship as reasons for recalling Arpaio. [10]

Gallego worked for Strategies 360 as Director of Latino and New Media operations. He also worked for Riester, one of the largest public relations firms in Arizona, and for Phoenix Councilman Michael Nowakowski. [11] 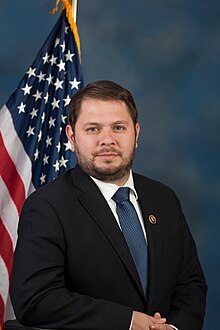 Gallego during the 114th Congress

On February 27, 2014, Gallego announced his candidacy for U.S. Congress in Arizona's 7th congressional district. [12] Gallego resigned from the Arizona House in March 2014. [13] He was not required to give up his seat under Arizona's resign-to-run laws, since he was in the final year of his state house term.

Mayday PAC, a super PAC seeking to reduce the role of money in politics, announced its endorsement of Gallego because of his impressive evolution on the issue of campaign finance reform. [14] On February 28, 2013 Gallego voted against an amendment that sought to raise campaign finance limits for federal candidates and abolish all limits for state candidates, HB 2523. [15] He has since been a vocal supporter of the Government By the People Act. [16]

Gallego supports same-sex marriage and the inclusion of LGBTQ people under the Employment Nondiscrimination Act. [22]

In a letter to the U.S. Attorney General Jeff Sessions, Gallego stated "I support full legalization of marijuana. As a member of the Arizona legislature, I introduced a bill that would have legalized marijuana possession and regulated and taxed marijuana in our state in a manner similar to alcohol. I wholly support these types of measures." [26]

As of 2016, Gallego has an "A" rating from NORML for his drug reform-related voting record. [27] He has a rating of 5 out of 6 for his pro-cannabis record from the National Cannabis Industry Association. [28]

Gallego supports cap and trade legislation. He is in favor of carbon taxes and increasing funding for renewable, clean energy. [33]

Ruben Gallego during a National Resources Committee meeting in 2020.

Gallego opposed the Trump administration’s proposed rollback of protections for the Tongass National Forest in southeast Alaska. [34] Gallego oppposed the building of the Rosemont mine in Arizona, saying the mine will have a "devastating" environmental impact. He has sponsored efforts to require operators of public water systems to report when lead is found in water. [35]

Gallego has a 97% lifetime rating from the League of Conservation Voters for his pro-environment voting record. [36]

Gallego supports the Government by the People Act and he has co-sponsored efforts to introduce democracy vouchers and automatic voter registration. [37]

Gallego supports Obamacare and opposed the repealing of the law. [39]

He has a 100% rating from Planned Parenthood for his pro-women's health voting record. [40]

Gallego is a Marine who served in the Iraq War. Gallego supported efforts to repeal Don't Ask, Don't Tell. [41]

Gallego opposes efforts to deport undocumented immigrants while they wait to be eligible for citizenship. He has co-sponsored efforts to require lawyers for children who are at risk at being deported. [42]

Ruben Gallego has a 9% rating from Heritage Action for America for his progressive voting record. [46]

On August 7, 2008, Ruben Marinelarena changed his name to Ruben Marinelarena Gallego to honor his mother, Elisa Gallego, who raised him and his three siblings on her own after his father abandoned the family in his childhood. [47]

Gallego was married to Kate Widland Gallego (later elected Mayor of Phoenix). They divorced in 2017, just prior to the birth of their child. [48]

Gallego currently sits on the boards of Valley Citizens League, and the President’s Community Advisory Board for South Mountain Community College. [49]