From Wikipedia, the free encyclopedia
U.S. Representative from Nevada

Steven Alexzander Horsford (born April 29, 1973) is an American politician and businessman serving as the U.S. Representative for Nevada's 4th congressional district since 2019, previously holding the position from 2013 to 2015. A member of the Democratic Party, he served in the Nevada Senate, representing the 4th district, in Clark County, from 2005 to 2013. Horsford was the first African American to serve as Majority Leader (2009–2013) and the first African American to represent Nevada in Congress. [1] Horsford was defeated by a Republican opponent in 2014. [2] After the election he joined an international Las Vegas-based business and marketing consulting firm, R&R Partners, [3] for which he had worked before beginning his political career. [4] In January 2018, he announced that he would run in the midterm elections, [5] which he won in November 2018, defeating former Republican U.S. Representative Cresent Hardy in a rematch of their 2014 race.

Horsford was born and raised in Las Vegas, Nevada. His mother, Pamela Horsford, came to the U.S. from Trinidad in her teens and gave birth to Horsford when she was 17. While attending Ed W. Clark High School in Las Vegas, [6] Horsford worked at Pizza Hut and at a veterinarian's office, where he cleaned kennels after hours. [7]

When Horsford was 19, his father, Gary Shelton, was killed. One report states that Shelton "was shot and killed at work by a man who had tried to rob the store" in North Las Vegas at which he worked as a cook, [7] while another report states that he "was killed in a drug incident." [8] After his father's death, Horsford temporarily returned home from the University of Nevada, Reno, where he had been studying political science and communications. Horsford returned to college the following year. [9] [10] He received a degree from the University of Nevada, Reno, in 2014. [7]

Horsford was CEO of the Culinary Training Academy, a job training program. [11] He also served on the Southern Nevada Workforce Investment Board. [12] In 1996, he began working at R&R Partners in Las Vegas. [4]

In 2004, incumbent Democratic State Senator Joe Neal, from Clark County's 4th Senate district, decided to retire in order to run for a seat on the Clark County Commission. Horsford ran and defeated Republican Mabel Florence Lucier 72%–28%. [13] [14] He became the fourth African American to serve as a State Senator since the Nevada Legislature first convened in 1864. [15] In 2008, he won reelection to a second term with 74% of the vote. [16]

Horsford served in six special sessions and four regular sessions of the Nevada Legislature. In February 2009, he assumed the position of Nevada Senate Majority Leader. [17]

In November 2009, Horsford was caught by a Las Vegas television station illegally parking his SUV with his personalized license plate "State Senator 17" in a handicapped parking space at a park for six hours. Horsford's car was noticed by the mother of a disabled child. Horsford apologized, saying "There was no excuse, it should have never happened." He said that he had made a donation to a nonprofit group in the amount that he would have been fined had he been caught by a law enforcement official. [21] [22]

In the summer of 2010, Horsford sent a fundraising letter from his PAC soliciting donations in exchange for private meals or receptions to meet with various Democratic legislative leaders and Senate committee chairs. Following criticism that the letter amounted to "pay to play," he discontinued the solicitation program and refunded all donations made in response to the letter. [23]

In 2011 web poker giant PokerStars treated Horsford to a trip to the Bahamas prior to the introduction of legislation that would benefit the online gaming industry. [24] [25] Horsford personally reimbursed the full cost of the trip, but said, "It was productive. They made a good presentation." [24] Horsford received $37,500 in campaign contributions from PokerStars. Forty seven other Nevada legislators, including his subsequent opponent, Cresent Hardy, received contributions from PokerStars. [26] Horsford and some other legislators later returned the contributions. [27] 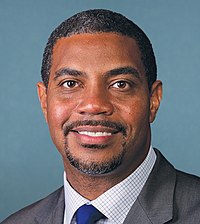 Horsford during the 113th Congress

In October 2011, Horsford announced he would run for Congress, but did not know at the time which district he would run in because the Nevada Legislature had not finished the redistricting maps. [28] He decided to run in the newly created 4th congressional district, which includes the northern portion of Clark County as well as all or part of the rural counties of Lincoln, White Pine, Nye, Esmeralda, Mineral and Douglas. [29] [30]

Horsford was due to face former State Representative John Jay Lee in the Democratic primary. However, Lee dropped out in November, effectively handing the nomination to Horsford. He defeated Republican Danny Tarkanian in November by 50%–42%. Although Tarkanian won the rural counties in the district by margins of better than 2-to-1, Horsford carried Clark County, home to four-fifths of the district's voters, by 28,800 votes. [31]

Horsford's two-year term began on January 3, 2013. He did not resign from the Nevada Senate as it would not be in session before the end of his term on February 4, 2013. He was a member of the House Progressive Caucus, and was the only caucus member who supported the September 30, 2013, continuing resolution that contained a one-year delay of the Affordable Care Act's individual mandate. [32]

Horsford was an original co-sponsor of H.R.15, which would have created a pathway to citizenship for undocumented immigrants. [33] He has said that Congress needs to address immigration as a whole, not just young people living in the country illegally. He said increased border security with Mexico and Canada was needed, but that a southern border wall would not solve the immigration problem, as reported the Las Vegas Sun in 2018. [7]

On December 18, 2019, Horsford voted for both articles of impeachment against President Donald J. Trump, including abuse of power and obstruction of Congress. [34]

“It has become apparent that President Trump is a continuing threat to our democracy and danger to our national security. He abused the power of his office for personal and political gain at the expense of our national security; he conditioned official acts—millions in military aid and a White House meeting—for his personal, political gain; and he attempted to cheat our democracy and corrupt our elections. And so today, I will vote in favor of the two articles of impeachment against President Trump. No one is above the law. Not even the President.” [35]

Horsford “sees healthcare as a right, not a privilege.” He believes that all Americans should have health care of the sort provided to veterans and senior citizens. [7]

Horsford supports a gun control package that would include background checks, a ban on assault weapon and bump stocks, banning private sales and closing the gun show loophole, an increase in mental-health funding and programs to address bullying in schools. Asked in May 2018 about gun confiscation, he said, “I believe we have to be very careful under the Second Amendment not to take away someone’s right, but to be clear, assault rifles and weapons of war are not the same as other forms of weapons, and we need to be very careful and make a clear distinction.” [33]

During his first term in Congress, Horsford worked on “an agreement that allowed for the designation of the Tule Springs Fossil Beds National Monument and the designation of about 50,000 acres of wilderness in north-central Nevada.” He does not support the transfer of federal land in Nevada to state control, saying, “Nevada hasn’t been able to properly fund education. How is it going to be able to manage 87 percent of public lands that are now currently managed by BLM, Forest Service and wildlife? Let’s be realistic about our priorities and let’s continue being partners.” [33]

Horsford is a strong supporter of Israel and has described the controversy about the relocation of the U.S. Embassy to Jerusalem as “a distraction away from the important international issues we are right now faced with.” [33]

Horsford announced in January 2018 that he would run to replace retiring incumbent Ruben Kihuen in Nevada's 4th congressional district. Kihuen declined to run for a second term following sexual harassment allegations. [5] Horsford won the June 2018 Democratic primary and went on to face Republican nominee Cresent Hardy in the general election. [38] In the November 2018 general election, Horsford defeated Hardy by 8 points, avenging his 2014 loss. He was sworn in on January 3, 2019. [39]

Horsford was active in arranging for Nevada to host the second national presidential caucus in 2008. He was an early supporter of Barack Obama's candidacy, co-chairing Obama's campaign in the state. [40] [41]

In April 2015, Horsford resumed working at R&R Partners. As an officer of that company, he oversaw an effort to help MGM Resorts International ensure that it kept its word to officials in Prince George's County, Maryland, that at least half of the workforce for the MGM National Harbor in Maryland would be made up of residents of that county and that the MGM National Harbor would contract with minority-owned firms. [4]

He is married to Dr. Sonya Horsford, a professor of educational leadership at Teachers College, Columbia University. They married in 2000 and have three children. [43]

He is a member of Alpha Phi Alpha fraternity. [44]

Horsford had six-way open heart bypass surgery in 2013 to treat a hereditary condition. [7]