From Wikipedia, the free encyclopedia
U.S. Representative from Nevada

Alice Costandina "Dina" Titus (born May 23, 1950) is an American politician who has been the United States Representative for Nevada's 1st congressional district since 2013. She served as U.S. Representative for Nevada's 3rd congressional district from 2009 to 2011, when she was defeated by Joe Heck. Titus is a member of the Democratic Party. She served in the Nevada Senate and was its minority leader from 1993 to 2009. Before her election to Congress, Titus was a professor of political science at the University of Nevada, Las Vegas (UNLV), where she taught American and Nevada government for 30 years.

Titus was born in Thomasville, Georgia. Her mother is of Greek descent, [1] and she was raised Greek Orthodox. She grew up in Tifton, Georgia. Her first exposure to politics came at an early age, when her father, Joe Titus, ran for the Tifton City Council. Her uncle, Theo Titus, served in the Georgia House of Representatives for many years. [2] She attended a summer program at The College of William & Mary and was admitted full-time for the fall without a high school diploma. There she earned her bachelor's degree in political science. Titus went on to earn a master's degree from the University of Georgia and a Ph.D. from Florida State University. [2]

After a year teaching at North Texas State University, Titus moved to Nevada for a faculty position in the political science department at the University of Nevada, Las Vegas (UNLV). During her 30 years there, her students included a virtual who's-who list in Nevada government, public service and legal circles, and her classes' popularity was reflected in the teaching-related awards she received. [2] She created and continues to coordinate UNLV's Legislative Internship Program, which gives students an opportunity to work at the state legislature. 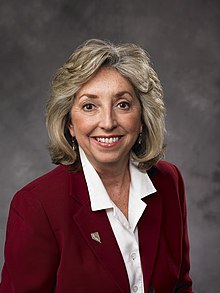 First elected in 1988, Titus served for 20 years in the Nevada Senate, representing the Clark 7th District. Her major achievements from the 2007 session included:

Titus authored a bill that requires health insurance companies to cover the costs of the HPV vaccine Gardasil. Gardasil protects women and girls from 70% of cervical cancers. The bill passed both the Senate and the Assembly and was signed by Governor Jim Gibbons.

Measure to care for pets in emergencies

Titus authored a bill that provides for the rescue of pets in a natural disaster emergency. It was co-sponsored by Senators Randolph Townsend and Valerie Wiener. Titus told Las Vegas television station KVBC: "We all remember heartbreaking scenes and stories from Louisiana, Mississippi and Florida... When lives are turned upside down by disaster, people seek comfort and normalcy. To exacerbate problems by forcing a disaster victim to leave behind a beloved pet—a member of their family—is both unconscionable and entirely unnecessary. Emergency responders can and should take into account pets and service animals in disaster rescue and recovery plans. Planning could save disaster victims from needless additional pain at a most difficult time." [4] The bill was signed into law in June 2007.

On December 18, 2019, Titus voted for both articles of impeachment against President Donald Trump. [5]

Titus has sponsored at least 59 bills, including: [6] 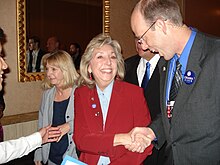 Titus is the author of Bombs in the Backyard: Atomic Testing and American Politics [11] and Battle Born: Federal-State Relations in Nevada During the Twentieth Century. [12]

In 2014 Titus received a 100% rating from Planned Parenthood for opposing a nationwide abortion ban after 20 weeks and supporting abortion access in the District of Columbia and through the Patient Protection and Affordable Care Act. [13]

Incumbent Governor Kenny Guinn could not run in 2006 due to term limits. Titus won the Democratic nomination, but lost to Republican Congressman Jim Gibbons. Titus won Clark County, but her margin there was not enough to overcome Gibbons's landslide margin in the 2nd District.

Democrats were heavily targeting 3rd district Republican incumbent Jon Porter. Their top candidate was Clark County prosecutor Robert Daskas, but Daskas dropped out in April for family reasons. Democrats then recruited Titus, who had won the district in her unsuccessful 2006 run for governor. Titus defeated Porter in November, 47% to 42%, becoming the first Democrat to represent the district. She was a major beneficiary of the overall anti-Bush sentiment in the Las Vegas area. She was elected Regional Whip in the 111th Congress. [14]

On October 31, 2011, Titus entered the Democratic primary for Nevada's 1st congressional district, where her home had been placed by redistricting. The incumbent, fellow Democrat Shelley Berkley, gave up the seat to run for the United States Senate. While the 3rd is considered a swing district, the 1st is far and away the safest Democratic seat in Nevada. [15] She initially faced a challenge from State Senator Ruben Kihuen in the primary. Kihuen dropped out in February 2012, reportedly due to trailing in polls and fundraising. [16] This all but assured Titus's return to Congress after a two-year absence. She easily defeated her Republican challenger, Chris Edwards.

Titus has been married to Thomas C. Wright for 30 years. Wright is a retired professor of history at UNLV. His studies in his field of expertise, Latin American history, have taken the couple on extended journeys throughout Central and South America and to Spain. [17]

Titus is also a member of the Tortoise Group of Clark County, Nevada Test Site Historical Foundation, PEO International, National League of American Pen Women, Nevada Women's Lobby, Women's Research Institute of Nevada, Nevada Commission on Participatory Democracy, Clark County Neighborhood Justice Center, Las Vegas Little Theater, the Educational Commission of the States, National Wildlife Federation, and the Nature Conservancy. On April 13, 2009, the Paradise Democratic Club of Las Vegas named her Outstanding Democrat of the Year for the second time. President Obama sent her a congratulatory letter. In December 2010, Senator Harry Reid appointed her to a six-year term on the United States Commission on Civil Rights. [18] She is of the Greek Orthodox faith.