From Wikipedia, the free encyclopedia
"Ways and Means Committee" redirects here. For the general concept, see Ways and means committee.

The Committee on Ways and Means is the chief tax-writing committee of the United States House of Representatives. Members of the Ways and Means Committee are not allowed to serve on any other House Committee unless they are granted a waiver from their party's congressional leadership. The Committee has jurisdiction over all taxation, tariffs, and other revenue-raising measures, as well as a number of other programs including Social Security, unemployment benefits, Medicare, the enforcement of child support laws, Temporary Assistance for Needy Families and foster care and adoption programs.

The United States Constitution requires that all bills regarding taxation must originate in the U.S. House of Representatives, and House rules dictate that all bills regarding taxation must pass through Ways and Means. This system imparts upon the committee and its members a significant degree of influence over other representatives, committees, and public policy. (See also, the U.S. Senate Committee on Finance.)

Recent chairmen have included Bill Thomas, Charlie Rangel, Sander Levin, Dave Camp, Paul Ryan and Kevin Brady. On January 3, 2019, Richard Neal was sworn in as the new Chairman of the Committee on Ways and Means, upon the commencement of the 116th Congress. [1] He used his authority as chairman to formally request the tax returns of President Trump in April 2019, after Democrats had signaled their intention to do so on the midterms election night. 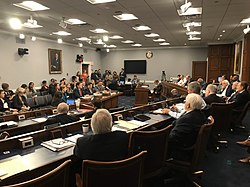 Inside a Ways and Means meeting in November 2019.

The conclusion of a ways and means committee to handle the financial matters of a legislature is an old one, having been used in the Parliament of the United Kingdom and the colonial and early state legislatures in America.[ citation needed]

The Ways and Means Committee was first established during the first Congress, in 1789. However, this initial version was disbanded after only 8 weeks; for the next several years, only ad hoc committees were formed, to write up laws on notions already debated in the whole House. It was first established as a standing committee by resolution adopted December 21, 1795, [2] and first appeared among the list of regular standing committees on January 7, 1802. [3] Upon its original creation, it held power over both taxes and spending, until the spending power was given to the new Appropriations Committee in 1865. [4]

During the Civil War the key policy-maker in Congress was Thaddeus Stevens, as chairman of the Committee and Republican floor leader. He took charge of major legislation that funded the war effort and permanently transformed the nation's economic policies regarding tariffs, bonds, income and excise taxes, national banks, suppression of money issued by state banks, greenback currency, and western railroad land grants. [5] Stevens was one of the major policymakers regarding Reconstruction, and obtained a House vote of impeachment against President Andrew Johnson (who was acquitted by the Senate in 1868). Hans L. Trefousse, his leading biographer, concludes that Stevens "was one of the most influential representatives ever to serve in Congress. [He dominated] the House with his wit, knowledge of parliamentary law, and sheer willpower, even though he was often unable to prevail." [6] Historiographical views of Stevens have dramatically shifted over the years, from the early 20th-century view of Stevens and the Radical Republicans as tools of enormous business and motivated by hatred of the white South, to the perspective of the neoabolitionists of the 1950s and afterwards, who applauded their efforts to give equal rights to the freed slaves.[ citation needed]

Three future presidents - James Polk, Millard Fillmore, and William McKinley - served as Committee Chairman. Before the official roles of floor leader came about in the late 19th century, the Chairman of Ways and Means was considered the Majority Leader. The Chairman is one of very few Representatives to have office space within the Capitol building itself. [7]

Because of its wide jurisdiction, Ways and Means has always been one of the most important committees with respect to impact on policy. Although it lacks the prospects for reelection help that comes with the Appropriations Committee, it is seen as a valuable post for two reasons: given the wide array of interests that are affected by the committee, a seat makes it easy to collect campaign contributions [8] and since its range is broad, members with a wide array of policy concerns often seek positions to be able to influence policy decisions. Some recent major issues that have gone through the Ways and Means Committee include welfare reform, a Medicare prescription drug benefit, Social Security reform, George W. Bush's tax cuts, and trade agreements including the North American Free Trade Agreement (NAFTA) and the Central America Free Trade Agreement (CAFTA).

Until 1974, the Ways and Means Committee decided which chairmanships newly elected members of Congress would have, along with its regular financial duties. [9] When Ways and Means chair Wilbur Mills' career ended in scandal, Congressman Phillip Burton transferred the committee's selection powers to a separate, newly created committee. [9]