From Wikipedia, the free encyclopedia
United States Congressman from Wisconsin

Mark William Pocan ( /ˈpoʊkæn/; born August 14, 1964) is an American politician and businessman serving as the U.S. Representative for Wisconsin's 2nd congressional district since 2013. The district is based in the state capital, Madison. A member of the Democratic Party, Pocan serves as Co-Chair of both the Congressional Progressive Caucus and the Congressional LGBT Equality Caucus. From 1999 to 2013 he served as a member of the Wisconsin State Assembly, representing the 78th district, [1] succeeding Tammy Baldwin there, [2] whom he also replaced in Congress when Baldwin was elected to the Senate.

Pocan was born and raised in Kenosha, Wisconsin. He graduated from Harvey Elementary School, Washington Junior High School, and Mary D. Bradford High School in 1982. He attended the University of Wisconsin–Madison, earning a bachelor's degree in journalism in 1986.

Shortly after graduating, Pocan opened up his own small business, a printing company named Budget Signs & Specialties, which he continues to own and run as of 2012. He is a member of the AFL-CIO, which he joined as a small business owner. [3]

Pocan's active years at UW-Madison in College Democrats led to his election in 1991 to the Dane County Board of Supervisors where he served Madison’s downtown community for three terms, leaving the board in 1996.

Pocan at the 2012 Gay Straight Alliance for Safe Schools banquet

In 1998 Pocan's longtime friend and ally, Tammy Baldwin, gave up her seat in the Wisconsin State Assembly to make a successful run for Congress. Pocan ran to succeed her in the state legislature and won a three-way Democratic primary with 54% of the vote. He faced no Republican opponent in the general election and won with 93% of the vote against an independent. He won reelection in 2000 with 81%—the only time he faced a Republican challenger. He was unopposed for reelection from 2002 to 2010. [4]

As a state legislator, Pocan earned a reputation for moving the Wisconsin political debate to the left. One of the most outspoken progressive members of the state assembly, he focused on difficult issues including corrections reform, the state budget, education funding, and fighting privatization schemes.[ citation needed]

For six years Pocan sat on the Joint Finance Committee, including a term as co-chair. He also took on a leading role among Assembly Democrats, running caucus campaign efforts in 2008 when Democrats went from five seats down to retaking the majority for the first time in 14 years.

In 2019 Pocan supported the Equality Act, a bill that would expand the federal Civil Rights Act of 1964 to ban discrimination based on sexual orientation and gender identity. [5]

On December 18, 2019, Pocan voted for both articles of impeachment against President Trump. [8]

In 2012 Baldwin gave up her congressional seat in order to run for the U.S. Senate and Pocan decided to run in the open 2nd congressional district. He won a four-candidate Democratic primary with 72% of the vote. He won all 7 counties in the district, including the heavily populated Dane County with 74% of the vote. [10] The 2nd is so heavily Democratic that Pocan's victory in the primary was widely regarded as tantamount to election. [11] On November 6, 2012, Pocan won the general election, defeating Republican Chad Lee 68%-32%. [12] [13] 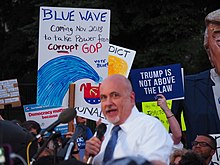 Pocan identifies as a progressive Democrat, and is a member of organizations including Wisconsin Citizens Action, the American Civil Liberties Union, Fair Wisconsin [17] and Midwest Progressive Elected Officials Network. He is also one of the few progressive Democrats to have joined the American Legislative Exchange Council (ALEC), a conservative-leaning organization that produces model legislative proposals. Pocan used his membership to investigate the organization's agenda and sponsors and wrote a series of articles on his experiences with ALEC for the Madison-based magazine The Progressive. [18][ when?] On the September 29, 2012 edition of Moyers and Company, Pocan said, "ALEC is a corporate dating service for lonely legislators and corporate special interests that eventually the relationship culminates with some special interest legislation and hopefully that lives happily ever after as the ALEC model. Unfortunately what’s excluded from that equation is the public." [19]

In September 2018 Pocan supported legislation invoking the War Powers Resolution of 1973 to stop U.S. involvement in the Saudi-led intervention in Yemen, saying, "The world’s worst humanitarian crisis has been triggered by our secretive, illegal war in Yemen waged alongside the Saudi regime. As the Saudis use famine as a weapon of war, starving millions of innocent Yemenis to near death, the United States fuels, coordinates and provides bombs for Saudi airstrikes, and secretly deploys the military to participate in on-the-ground operations with Saudi troops.” [20]

In April 2019, after the House passed the resolution withdrawing American support for the Saudi-led coalition in Yemen, Pocan was one of nine lawmakers to sign a letter to President Trump requesting a meeting with him and urging him to sign "Senate Joint Resolution 7, which invokes the War Powers Act of 1973 to end unauthorized US military participation in the Saudi-led coalition's armed conflict against Yemen's Houthi forces, initiated in 2015 by the Obama administration." They asserted the "Saudi-led coalition's imposition of an air-land-and-sea blockade as part of its war against Yemen’s Houthis has continued to prevent the unimpeded distribution of these vital commodities, contributing to the suffering and death of vast numbers of civilians throughout the country" and that Trump's signing the resolution would give a "powerful signal to the Saudi-led coalition to bring the four-year-old war to a close." [21]

Pocan is openly gay. He credits his political activism in part to an incident soon after he graduated from college and opened his printing business, when two men followed him after he left a gay bar and beat him with a baseball bat while they called him "faggot" and other slurs. [22] This gaybashing incident spurred him to become active in the Madison LGBT community. [23] Pocan was the only openly gay member of the state Assembly after Tammy Baldwin's election to Congress, and one of three LGBT members of the 100th Wisconsin Legislature, [3] alongside Sen. Tim Carpenter (D– Milwaukee) and bisexual Rep. JoCasta Zamarripa (D–Milwaukee).

On November 24, 2006, Pocan and his long-term partner, Philip Frank, were legally married in Toronto, Ontario. [24]

Pocan has received the following recognitions while in office: