Bellagio is a resort, luxury hotel and casino on the Las Vegas Strip in Paradise, Nevada. It is owned by The Blackstone Group and operated by MGM Resorts International and was built on the site of the demolished Dunes hotel and casino. Inspired by the Lake Como town of Bellagio in Italy, Bellagio is famed for its elegance. One of its most notable features is an 8-acre (3.2 ha) lake between the building and the Strip, which houses the Fountains of Bellagio, a large dancing water fountain synchronized to music.

MGM Resorts International owned the Bellagio until 2019, when it sold the resort to The Blackstone Group for $4.25 billion. MGM continues to operate the property under a lease arrangement. 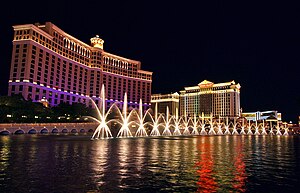 Bellagio was conceived by Steve Wynn, and Atlandia Design (a Mirage Resorts, Inc. wholly owned subsidiary) managed the design, construction and furnishing of the facility, following the purchase and demolition of the legendary Dunes hotel and casino in October 27, 1993 after the grand opening of Treasure Island Las Vegas. Bellagio's design architect was DeRuyter Butler, and Peter Smith was the project executive. Construction on the Bellagio began in May 1996. [2] [3] Bellagio had an original design and construction cost of US$1.6 billion. [4]

The interior design on the Bellagio was designed by Architectural Digest 100 four-time winner Roger Thomas. Roger Thomas, who retired in January 2020, was the executive vice president of design for Wynn Design & Development. He remains the principal of the Roger Thomas Collection.

Bellagio opened on October 15, 1998, just before 11 pm, in a ceremony that was reported to cost US$88 million. The VIPs invited to the grand opening were expected to donate to The Foundation Fighting Blindness US$1,000 a person or US$3,500 a couple, which entitled them to an overnight stay at Bellagio's suite rooms.[ citation needed] Opening night's entertainment began with Steve Wynn giving a 40-minute welcome speech followed by the opening of the Cirque du Soleil production O. Performing in Bellagio lounges that night were New York cabaret and recording artist Michael Feinstein, George Bugatti, and John Pizarrelli. When it opened, it was the most expensive hotel ever built.

In 2000 it became an MGM Mirage property when Mirage Resorts merged with MGM Grand Inc. to create MGM Mirage. In 2010, the company was renamed MGM Resorts International in a move to go worldwide with its brands.

Bellagio employs approximately 8,000 people. In the Autumn of 2006, the casino floor was remodeled and new uniforms were issued, changing the original color scheme to a more subdued beige theme.[ citation needed]

In October 2019, MGM Resorts announced it would sell the Bellagio to The Blackstone Group for $4.25 billion. Through the deal, the two companies would form a joint venture that would lease the Bellagio back to MGM Resorts for an annual rent of $245 million. [9] [10] [11] The sale was completed in November 2019. The joint venture was owned almost entirely by Blackstone. Under the deal, MGM acquired a five-percent ownership stake in the venture and continued to operate the resort through the lease. [12] [13]

Many professional poker players prefer to play at the Bellagio poker room, calling it their home base (or more commonly "The Office") due to the high table limits, including the high-stakes Big Game located in "Bobby's Room", named after Bobby Baldwin. The stakes at the Big Game can range up to $4,000/$8,000, and are frequented by such poker pros as Doyle Brunson, Daniel Negreanu, and Jennifer Harman. It is reported that the pots during this game can far exceed $1 million. [14]

Bellagio has also partnered with the World Poker Tour to host several of their tournaments.

There are several restaurants inside Bellagio as well as private dining, in-room dining, and poolside dining options: 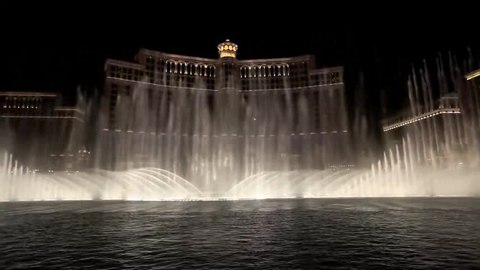 The Fountains of Bellagio is a vast, choreographed water feature with performances set to light and music. (See musical fountain.) The performances take place in front of the Bellagio hotel and are visible from numerous vantage points on the Strip, both from the street and neighboring structures. The show takes place every 30 minutes in the afternoons and early evenings, and every 15 minutes from 8 pm to midnight. Two minutes before a water show starts, the nozzles begin to break the water surface and the lights illuminating the hotel tower turn to a purple hue (usually), or red, white, and blue for certain music. Shows may be canceled without warning because of high wind, although shows usually run with less power in windy conditions. A single show may be skipped to avoid interference with a planned event. Additional shows can occur for special occasions including weddings. The fountain display is choreographed to various pieces of music, including “ The Star Spangled Banner” by Whitney Houston as the first show of the day, " Time to Say Goodbye" by Andrea Bocelli, " God Bless the USA" by Lee Greenwood, " Your Song" by Elton John, " Viva Las Vegas" by Elvis Presley, " Luck Be a Lady" by Frank Sinatra, " My Heart Will Go On" by Céline Dion, a three-song medley by Tiesto, and " The Sound of Silence" by Disturbed. [15]

The fountains are set in a 8-acre (3.2 ha) manmade lake. Contrary to urban myth, the lake is not filled with treated greywater from the hotel. The lake is actually serviced by a freshwater well that was drilled decades prior to irrigate a golf course that previously existed on the site. The fountains actually use less water than irrigating the golf course did. [16] They incorporate a network of pipes with more than 1,200 nozzles that make it possible to stage fountain displays coordinated with more than 4,500 lights. It is estimated that the fountains cost $40 million to build. The fountains were created by WET, a design firm specializing in inventive fountains and architectural water features. [17]

Four types of nozzles are used for the various effects:

This fountain was the largest fountain in the world when it first opened but then surpassed by Dubai Bay fountain and Okada Manila in 2010 and 2017 respectively. 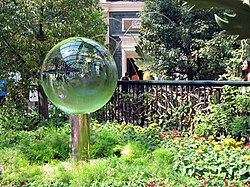 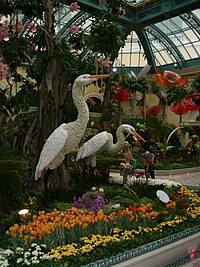 The hotel also contains a Conservatory and Botanical Gardens. There are five seasonal themes that the Conservatory undergoes: Chinese New Year, spring, summer, fall, and winter. [18] From January to mid-March, the Conservatory celebrates the Chinese New Year with a display dominated by flowers bromeliads and Orchids, as well as the animal of that particular year that the Chinese zodiac celebrates. The theme then changes over to the spring display, which lasts until May, and usually features a butterfly house as well as many varieties of tropical flowers. During Memorial Day weekend, Bellagio then switches over to its all-American summer display, featuring a large recreation of the Liberty Bell, as well as several American flags throughout the Conservatory.

The summer display is usually very patriotic featuring a lot of red, white, and blue, and is dominated by hydrangeas. From late September until Thanksgiving weekend the Conservatory puts on its Autumn display featuring several varieties of chrysanthemum and several large pumpkins. After Thanksgiving the Conservatory switches to its winter holiday display, which is dominated by a large centerpiece Christmas Tree and several varieties of poinsettia. Throughout the year the colorful displays are decorated with many fragrant flowers and usually contain fountains.

The Conservatory is located next to the hotel's lobby and is open to the public.

In addition to the numerous works of art found throughout the public areas of the resort, Bellagio also houses a special exhibition space displaying art work on loan from various museums and private collections from around the world. Originally the space that displayed the personal art collection of Steve Wynn, the Bellagio Gallery of Fine Art has since become a rotating exhibition space after he sold his hotels in 2000. In the past, the Bellagio Gallery of Fine Art was located near the grand staircase in the Conservatory that Julia Roberts descended in the movie Ocean's Eleven, but was then moved to its larger current location along the pool promenade eight months after Bellagio opened to better accommodate larger crowds. [19]

Past exhibits at the Bellagio Gallery of Fine Art include:

On April 14, 2017, a section of the shops at the Northern End of the Bellagio Fountains caught fire. This occurred at roughly 10:45 p.m. No one was hurt, and the fire was quickly put out. The fire was caused by a faulty exterior lighting system, and electricians and crew members are still working to find its exact cause.

Bellagio has won the AAA Five Diamond Award 15 years in a row, from 2000 to 2015; it was the first Strip hotel to receive the award ten or more times in a row. [20] Two of its restaurants, Picasso and Le Cirque, have also received the Five Diamond award. [20] The hotel is a member of The Leading Hotels of the World. In addition, Picasso has received two Michelin stars. Le Cirque and Michael Mina have each received one Michelin star. The resort is recognized on the Condé Nast Traveller Gold List as one of the "Top Hotels in the World". [21]

Bellagio serves as the central setting for the 2001 film Ocean's Eleven, in which a group of thieves conspire to rob its vault. In the film's 2007 second sequel, Ocean's Thirteen, two of the characters stand in front of Bellagio, reminiscing about Dunes, which had previously occupied the site.

The 2007 film Lucky You features many of its poker scenes inside Bellagio, although it is never specifically shown or mentioned.

The resort appears in the 2008 film Bolt, when Bolt, Mittens, and Rhino watch the fountains of the Bellagio.

In 2019, Celine Dion performed " My Heart Will Go On" alongside James Corden on the resort's lake for his Carpool Karaoke segment of The Late Late Show on CBS.