The Moulin Rouge Hotel was a hotel and casino located in the West Las Vegas neighborhood of Las Vegas, Nevada, that is listed on the United States National Register of Historic Places. The first desegregated hotel casino, it was popular with many of the black entertainers of the time, who would entertain at the other hotels and casinos and stay at the Moulin Rouge.

The Hotel was named after the Paris nightclub, the Moulin Rouge. 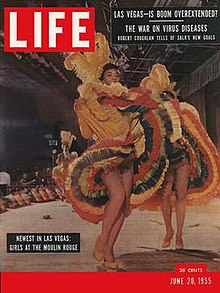 The Moulin Rouge opened on May 24, 1955, built at a cost of $3.5 million. [2] It was the first integrated hotel casino in the United States. [2] Until that time almost all of the casinos on the Strip were totally segregated—off limits to blacks unless they were the entertainment or labor force.

The hotel was located in West Las Vegas, where the black population lived. West Las Vegas was bounded by Washington Avenue on the north, Bonanza Road on the south, H Street on the west, and A Street on the east. The establishment was a model of eye-catching, 110 rooms, a gorgeous showroom, swimming pool, restaurant/coffee shop, dress-shop, and bar which was constructed of highly polished and expensive hardwoods.

References to Paris are numerous:

It was during this era that Vester Heath saw the need for an integrated hotel. Will, along with other white investors— Louis Rubin, owner of Chandler's Restaurant in New York City, and Alexander Bisno, who worked in real estate in California—and black boxing great Joe Louis, built and opened the Moulin Rouge at 900 West Bonanza Road. This location placed it in a prime location between the predominantly white area of the Strip and the largely black west side.

The complex itself consisted of two " Googie-populuxe" Modernist style stuccoed buildings that housed the hotel, the casino, and a theater. The exterior had the hotel's name in stylized cursive writing and murals depicting dancing and fancy cars. The sign was designed by Betty Willis, creator of the " Welcome to Las Vegas" sign on the south end of the Strip. The Moulin Rouge in Paris was a source of inspiration. When the casino opened the revue "Tropi Cancan," was inspired by the French Cancan, created in the 19th century to the Moulin Rouge Paris: «The Moulin Rouge Hotel and Casino opened on May 24, 1955 to fanfare, long lines of well-dressed visitors, and Las Vegas' newest showroom revue, the Tropi-Can-Can Revue» This inspiration comes from the first Afro-American star in France, Josephine Baker. The wall painted of the Moulin Rouge Las Vegas, included many references to Paris and Toulouse-Lautrec. "Black showgirls performed on a stage amid a backdrop of walls featuring mahogany wood trim and Toulouse-Lautrec-style murals of black French cancan dancers. The showroom featured "Tropi-Can-Can" under the tutelage of veteran producer Clarence Robinson."

When it opened, the Moulin Rouge was fully integrated top to bottom, from employees to patrons to entertainers.

The hotel made the June 20, 1955, cover of Life magazine, with a photo of two showgirls. A veritable "A" list of performers regularly showed to party until dawn. Great black singers and musicians such as Lena Horne, Sammy Davis Jr., Louis Armstrong, Sarah Vaughan, Nat King Cole, Duke Ellington, Dorothy Dandridge, Harry Belafonte, Pearl Bailey, and Count Basie would perform often. Many of these artists were banned from gambling or staying at the hotels on the Strip. [2] In addition, white performers, including George Burns, Jeanette MacDonald, Tallulah Bankhead, Judy Garland, Marlene Dietrich, Frankie Laine, Maurice Chevalier, Zsa Zsa Gabor, Jack Benny, Sophie Tucker and Frank Sinatra, would drop in after their shows to gamble and perform. Eventually management added a 2:30am "Third Show" to accommodate the crowds.

The short but vibrant life of the Moulin Rouge helped the Civil Rights Movement in Las Vegas. For a while the hotel was owned by the first African American woman to hold a Nevada Gaming License, Sarann Knight-Preddy. Many of those who enjoyed and were employed by the hotel became activists and supporters. The hotel was also the spark needed to bring an end to segregation on the Strip.

In 1960, under threat of a protest march down the Las Vegas Strip against racial discrimination by Las Vegas casinos, a meeting was hurriedly arranged by then-Governor Grant Sawyer between hotel owners, city and state officials, local black leaders, and then- NAACP president Dr. James McMillan. The meeting was held on March 26 at the closed Moulin Rouge. This resulted in an agreement to desegregate all Strip casinos. Hank Greenspun, who would become an important media figure in the town, mediated the agreement.

In 1992 the building was listed on the National Register of Historic Places and became a symbol of the expanding of black civil rights, and a monument of Las Vegas's past.

Although the Moulin Rouge complex remained shuttered for decades, many plans had been hatched to rebuild and reopen the cultural landmark. But on May 29, 2003, a fire gutted the complex. [10] The facade with its signature stylized name was spared destruction. In 2004, a man arrested near the property was sentenced to four years in prison after pleading guilty to one count of arson in connection with the fire. [11]

January 2004 saw the Moulin Rouge sold again for $12.1 million to the Moulin Rouge Development Corporation. The stylized "Moulin Rouge" neon sign was turned back on. [12] A $200 million renovation of the site was announced but was never completed; developers went bankrupt in 2008 and a receiver was appointed for the property. [13]

Following a February decision to tear down the structures as a public nuisance, the third fire in four years on May 6, 2009, caused significant damage to the original hotel lobby building, but did not touch the remaining original exterior wall that held the signage. The signage had just been removed for storage at the Neon Museum boneyard. [14] The property, which was in foreclosure at the time of the fire, had failed to sell at a foreclosure auction the day before. [14]

In June, 2010, the Las Vegas Historic Preservation Commission approved permits for demolition of the remains of the buildings, citing numerous concerns by the city about the safety of the structures. Instead of demolishing what was left of the hotel wings, which had seemed to catch fire every few years, the city instead demolished the stone exterior wall, pillar, and facade that held the sign. Also destroyed was the landmark tower that stood over the West side and was a symbol to the residents. The tower, which the city claimed was unstable, took nearly half a day of weakening to finally pull down. As of February 2011, the red mosaic pillars still lie in the empty lot, and the unstable, fire hazard hotel wings still stand. [15]

In 2017, the receiver awarded Clark County the right to redevelop the Moulin Rouge site, but the county withdrew its bid after an outcry from neighborhood residents over the proposed reuse, a government building. [9] In July 2019 a bid by a local group called Moulin Rouge LLC to develop a new hotel, casino, and convention center complex was accepted; a bid by a rival group also proposes a new casino and hotel. [13]