Set on 6.27 acres (2.54 ha) at 3rd Street and East Ogden Avenue, the Downtown Grand has two hotel towers: to the east, the 18-story Casino Tower built in 1985 with 295 rooms, and to the west, the 25-story Grand Tower with 334 rooms. The East Tower is connected to the ground level casino. The property is served by a four-level parking garage and features several restaurants and entertainment venues along 3rd Street. These establishments include Freedom Beat, Triple George Grill, Sidebar, and Hogs and Heifers Saloon.

On February 11, 2006 the hotel and casino, but not the timeshares, closed for remodeling; the property was expected to be closed for nine to twelve months but financing collapsed.

Workers tearing down portions of the casino for renovation in October 2012.

In July 2008 the city was investigating rezoning the nearby land containing the transit center to unrestricted gaming. With the transit center relocated, the land would be available for development.[ citation needed] Mayor Oscar Goodman applauded the attempt to re-invigorate the plans to renovate the Lady Luck: "For the past several years I have seen a rotting corpse. The Lady Luck structure has been a blight." [4]

As of July 2009, Goodman once again said in a council meeting that "The Lady Luck is a disaster," and then called the skeletal structure a "carcass". Las Vegas city leaders wanted CIM Group to raze the unfinished structure at Fourth Street and Stewart Avenue and do a better job of keeping sidewalks and landscaping clean near the site. CIM had until late December 2009 to begin a $100 million renovation of the Lady Luck; otherwise, it would potentially lose an offer from the city which would hand over land around the proposed nearby Mob Museum. [5]

On July 23, 2009, some demolition work started on a 4-story concrete building adjacent to the main resort. This work was completed in accordance with the city's request for CIM Group to raze the condemned structure. [6]

On March 15, 2010, CIM Group made an agreement with city officials to have the renovations completed by December 31, 2011. There was the potential that the hotel/casino would reopen in 2012, five years after its originally scheduled reopening in 2007. [7]

In October 2011, plans were announced to rename the Lady Luck to the Downtown Grand.[ citation needed] The property underwent a $100 million renovation. [8] Construction of Downtown3rd on the former site of the Lady Luck began in the fall of 2011. The new Downtown Grand Hotel and Casino was scheduled to open in late 2013, [9] and the remainder of Downtown3rd was expected to be completed in late 2014. 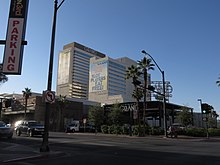 In January 2019, construction began on a 495-room hotel tower, which will increase the hotel to 1,124 rooms. [13] The tower was topped off in February 2020, and is expected to be opened in September. It is located on the east side of the Downtown Grand property. [14]