The Golden Nugget Las Vegas is a luxury hotel and casino located in downtown Las Vegas, Nevada on the Fremont Street Experience. The property is owned and operated by Landry's, Inc. [1] It has 2,419 hotel rooms. [2] 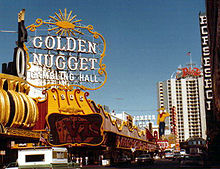 The Golden Nugget was originally built in 1946, [3] making it one of the oldest casinos in the city. Jackie Gaughan at one time owned a stake in the hotel as part of his many downtown properties. [4] Steve Wynn bought a stake in the Nugget, which he increased so that, in 1973, he became the majority shareholder, and the youngest casino owner in Las Vegas. [5] In 1977 he opened the first hotel tower and the resort earned its first four diamond rating from Mobil Travel Guide. It was the foundation for Wynn's rise to prominence in the casino industry. The second hotel tower opened in 1984 along with the showroom, and the third tower was opened in 1989. In 2000, the Golden Nugget (and all of Mirage Resorts' other properties) was sold to MGM Grand, Inc. (later named MGM Mirage).

Although the Golden Nugget was profitable, it was not part of the master expansion plan of the corporation which was focused on consolidating a long stretch of the Strip by acquiring Mandalay Resort Group, building City Center, and beginning construction in Macau. Gaming revenue on Fremont Street had peaked in fiscal year 1993. The Golden Nugget was sold in 2003, for $215 million to Poster Financial Group, owned by Timothy Poster and Thomas Breitling. When Poster Financial assumed control of the Golden Nugget, they began to upgrade the gambling operation by installing new cashless slot machines and by increasing the maximum bet available at table games to $15,000. Their story became the basis for The Casino, a television series on Fox that premiered on June 14, 2004. 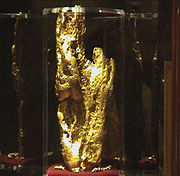 The Hand of Faith

On February 4, 2005, Houston, Texas-based Landry's, Inc announced its intent to purchase the property and the Golden Nugget Laughlin. The sale closed on September 27, 2005. After the purchase, the Golden Nugget embarked on a 14-month, $100 million renovation project, which was completed in November 2006. In December 2007, the Golden Nugget completed its $70 million Phase II project, which expanded the resort west onto First Street and introduced additional entertainment, event and dining venues. Phase III was the opening of the 500-room, $150 million Rush hotel Tower on November 20, 2009 along with the Chart House restaurant. [1]

Was seen in the music video for "Night Fever" by the Bee Gees.

The world's largest gold nugget on display, the Hand of Faith is still shown today in the Golden Nugget lobby. [9] Weighing 875 troy ounces (960 oz; 27,200 g) and 18 inches (46 cm) in length, the Hand of Faith was found near Kingower, Victoria, Australia, and put on display at the casino in 1981 amid a number of other gold nuggets.[ citation needed]

The casino's large hotel sign at its entrance off Fremont and Casino Center was removed in 1984 when the casino underwent renovations. The old sign presently sits at the YESCO signage yard.

The expanded resort is built around two aquariums. The larger faces the swimming pool, and incorporates a slide through the tank containing full grown sharks. The smaller aquarium is in the lobby of the Rush Tower.

A total of five specialty restaurants were added: Vic & Anthony's steakhouse, Grotto Ristorante, Lillie's Asian Cuisine, Red Sushi and Chart House. The Chart House has a view of one of the aquariums. The pool is a $30 million unique three level adventure with an enclosed slide through a shark tank, hidden grottos, swim up bars, jacuzzis and multi depth areas. [10] 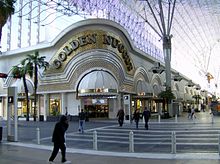 Golden Nugget during the day in 2007

Tom Breitling and Tim Poster were the highest profile successful entrepreneurs who profited in the downtown market during the last crisis. As recounted in Tom Breitling's book, Double or Nothing, the partners agreed to buy the Golden Nugget and had an agreement to sell the property after operating it for only one year. [11] The partners made $113 million in profit, called the highest rate of return in such a short time in the gaming industry. [12] Amazingly enough the partners had a negative income for the year and the fortune was made while total revenue for downtown was still basically flat.