From Wikipedia, the free encyclopedia
This article is about the downtown Las Vegas casino. For the planned Las Vegas Strip casino, see Las Vegas Plaza.

The Plaza Hotel & Casino is a casino– hotel located in downtown Las Vegas, Nevada owned by the Tamares Group, and PlayLV is the leaseholder and operator of the property. It currently has 995 rooms and suites, as well as an 80,000-square-foot (7,400 m2) casino and more than 25,000 square feet (2,300 m2) of event space. The Plaza also features a classic showroom, seasonal roof top swimming pool, fitness center, downtown's only bingo room, and a race and sports book.

The Plaza began an extensive $35 million renovation project at the end of 2010 that included brand new guestrooms and suites, an entirely remodeled casino floor and lobby, and all new restaurants, bars and entertainment options. [1] The renovations utilize contemporary furnishings and materials purchased from the Fontainebleau Resort after it suspended construction on the Las Vegas Strip. The hotel and the full casino reopened on 1 September 2011. The property has undertaken numerous other renovation projects in the years since to further enhance the guest experience.

Prior to the construction of the casino, part of the site was used for the first train station in Las Vegas, a Spanish style depot, constructed in 1906. [2] It was replaced in 1940 with a Streamline Moderne train station designed by H. L. Gogerty, with a Union Pacific shield, and "Streamliners & Challengers" neon sign. [3] This station was demolished in 1970 and replaced by the Union Plaza Hotel, which included a small waiting room to be used as a station for Amtrak trains. [4]

Opened on July 2, 1971, with the owners including local businessmen: Sam Boyd, Frank Scott, Howard Cannon and Jackie Gaughan. Its original name was Union Plaza, in reference to the Union Pacific railroad station that originally stood at the site.

From 1990 to 1992, the red neon object[ clarification needed] was installed at the top of the neon sign.

Before the discontinuation of the Desert Wind train route on 10 May 1997, Amtrak made its Las Vegas, Nevada station near the Plaza. The station and ticket windows were directly connected to the hotel. It was the only train station in the United States located in a casino.

Barrick Gaming Corporation acquired the Plaza from Jackie Gaughan and in late 2005 later ceded operation to majority owner Tamares Group. On 1 July 2005 after Tamares took control of the Plaza, Las Vegas mayor Oscar Goodman made his opinions clear: "If I had my druthers, I would like to have somebody in place to discuss imploding the Plaza." [5] He was referring to his desire to see the Plaza replaced with new construction that would create a scenic entrance to Union Park.

During its ownership by Barrick Gaming Corporation, D.W. Barrick's good friend, Larry Manetti (who played Orville "Rick" Wright on the television show Magnum, P.I.) hosted a celebrity brunch every Sunday, featuring such guests as Pat Morita and Steve Rossi.[ citation needed] He also owned Manetti's in the Plaza. When Barrick sold its interest in the hotel to the Tamares Group, Manetti closed his restaurant and severed his relationship with the hotel. The Plaza's famed glass dome is now the home of the award-winning Oscar's Steakhouse, which opened in 2011 and is named after and influenced by Oscar Goodman. 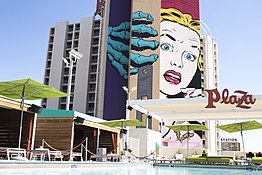 The Plaza's rooftop pool with D*Face mural on North Tower in the background.

The hotel closed for renovations on 11 November 2010, and acquired furniture, carpets and fixtures from the bankrupt Fontainebleau Resort Las Vegas project on the Strip. [6] From November, 2010 to August, 2011, the Plaza still operated its sports & racebook, showroom, one bar, and a portion of the casino. By March 2011, the south tower had been renovated, and the casino finished renovations and re-opened on August 24, 2011. [7] The hotel officially re-opened for business on September 1, 2011. [8]

In 2014, the Plaza announced that a new 3,500-seat facility would be constructed at the hotel to become the new home arena for the Las Vegas Wranglers minor league hockey team of the ECHL. [9] However, the hockey team suspended operations for the 2014-15 season and would eventually fold mid-season.

The property has undertaken numerous other renovations and amenity enhancement projects since 2011. In 2016, the Plaza fully refurbished its rooftop pool creating a "retro Palm Springs meets classic downtown Las Vegas" inspired outdoor space with a wet deck, hot tub, private cabanas, bar and food truck. With 12 Pickleball courts, the Plaza is the only hotel/casino in Las Vegas with so many courts dedicated to the sport. [10] As a result, it hosts the Las Vegas Pickleball Open each September.

The Plaza also has the Core Arena, the first and only equestrian center in downtown Las Vegas, with 80 equine stalls for year-round use. [11]

The syndicated Ultimate Poker Challenge has been taped at the Plaza as well as the currently-running National Wrestling Alliance program NWA Wrestling Showcase, airing on Colours TV.

CBS finished production early in 2010 of a show called The Odds that was to take place at the Plaza Hotel as well as along the Fremont Street Experience starring Donald Faison. [15]

In a 1991 episode of Murder She Wrote - A Killing in Vegas, the Plaza Hotel can be seen in two scenes. The first is where Jessica is seen coming out of the Hotel she is staying at and the Lobby Entrance Canopy lights can clearly been seen. The second is just before the victim gets murdered and the scene shows a quick glimpse of Fremont Street from the Pioneer looking up the street towards the Plaza at the top of the road (the name Plaza can clearly be seen.)