Bartlett is a village located in Cook, DuPage and Kane counties, Illinois. A small parcel on the western border is in Kane County. The population was 41,208 at the 2010 census.[4]

In its earliest times, the Village of Bartlett, Illinois was served as a hunting and camping ground for the Cherokee, Miami, Potawatomi, and Ottawa Indians. Throughout the past, the Northwest Territory, Virginia, Indiana, Spain, France and England had staked their claim for Bartlett. However, the territory was owned by a man named Luther Bartlett. Luther and Sophia Bartlett had decided that a station stop would be beneficial for their town and townspeople. In 1873, Bartlett gave a monetary contribution and half of his 40-acre woodlot towards the construction for a train depot, which is why the town is named after Luther Bartlett . Bartlett later became one of the premiere pig towns, becoming their main export for years to come. A petition for incorporation was filed in Springfield on February 11, 1891. The village was incorporated on June 21, 1892. Bartlett experienced the majority of its population growth in the 1980s. [4] 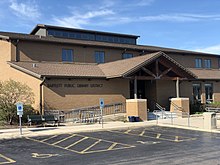 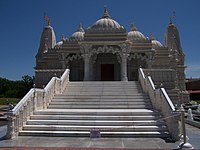 In 2011 Bartlett had 5,918 Asian residents, more than twice the number as in 2001. Ashok Selvam of the Daily Herald of Arlington Heights, Illinois said that the Asian population growth "could be traced to construction of the BAPS Shri Swaminarayan Mandir". [9]

Apart from the downtown area, Bartlett has a large retail area centered by the intersection of Illinois Route 59 and Stearns Road. Businesses include:

At the intersection of Illinois Route 59 and Stearns Road in The Home Depot parking area a four tenant building was voted for on October 17, 2017 successfully. The new building will include Starbucks, Great Clips, and two additional stores. The Great Clips was the first store to open in the four tenant building, leaving the older store across the street vacant.

On August 8, 2004, the BAPS organization, a sect of Hinduism, opened BAPS Shri Swaminarayan Mandir, Chicago, a large 22,442-square-foot (2,084.9 m2) temple, or mandir, on Illinois Route 59, just south of U.S. Route 20. Covering 30 acres (120,000 m2), it is the largest traditional Hindu mandir, of stone and marble, to be constructed in the United States. The mandir took 16 months to build and was constructed with Turkish limestone, Italian marble, and Indian makrana marble. The adjoining cultural center, known as the Haveli, was opened in October 2000. The large complex contains large rooms with intricately carved walls of stone and wood. It attracts many visitors of all faiths. [1]

The local park district in Bartlett also has a recreation center called Bartlett Community Center. This facility hosts a variety of sports that residents can sign up for and this includes: Adult Softball and Adult Basketball, Youth Basketball, Youth Soccer, Youth Girls Softball, Volleyball, Swimming, and an open gym. [13] [14]

The village of Bartlett has a mayor/council form of government. A village clerk, six trustees and a village president are elected in nonpartisan, at-large elections. They are elected for four-year terms. Elections are staggered, with three trustees elected every two years and the village clerk and president elected every four years. Municipal elections occur in odd-numbered years.

Bartlett also has a community preschool. [19]

The Bartlett Public Library was opened in 1973. After outgrowing the original building the village purchased land in 1981 and opened the new facility in 1983. The library was again expanded in 1995, where a second story was added, as of right now the library is a cozy two-story building with a warm cabin-like feel on the inside, due to the wooden inner structure. In 2015 more renovations to modernize the library were made, the addition of study rooms, conference rooms, and an art room in the youth and teen services department. This renovation also expanded the display area in the entrance of the library. [20]

The City of Bartlett was recently ranked the 9th-safest city in the United States according to the real estate market data platform NeighborhoodScout, with information analyzed from the FBI Crime Database from 2016. [23] [24]

There is an annual 4th of July festival that takes place located at the corner of S. Stearns and S. Bartlett Road near the Bartlett Community Center, 700 S. Bartlett Road. This festival includes a carnival with rides and games, food, beverages, free entertainment for all ages, bingo, a turtle race, a parade, on-site presence for nonprofit groups, skydivers, fireworks, and a great sense of community pride. [25]