From Wikipedia, the free encyclopedia
"Barb City" redirects here. For other uses, see Barb (disambiguation).
This article is about the city in Illinois. For the county, see DeKalb County, Illinois.
City in Illinois, United States

DeKalb /dɪˈkælb/ is a city in DeKalb County, Illinois, United States. The population was 43,862 according to the 2010 census, up from 39,018 at the 2000 census. The city is named after decorated Franconian-French war hero Johann de Kalb, who died during the American Revolutionary War.

Founded in 1856, DeKalb became important in the development and manufacture of barbed wire, especially for agriculture and raising livestock. While agricultural related industries remain a facet of the city, together with health and services, the city's largest employer in the 21st century is Northern Illinois University founded in DeKalb in 1895. Located about 50 miles from Chicago, the city is part of the Chicago metropolitan area.

DeKalb was originally called Huntley's Grove, [4] and under the latter name was platted in 1853. [5] The name is for Baron Johann de Kalb, a major general in the American Revolutionary War. [6] A post office has been in operation at DeKalb since 1849. [7] The development of barbed wire is key in the history of DeKalb. Joseph Glidden, who developed barbed wire, was a historic citizen of DeKalb. Glidden would ultimately be known as the “Father of Barbed Wire”. Glidden began to mass-produce his invention, and eventually sold half of the company to Isaac L. Ellwood. Together, the two formed the Barb Fence Company. [4]

The city of DeKalb is in northern Illinois, United States, roughly 55 miles west of downtown Chicago and roughly 30 miles southeast of Rockford, IL. The Kishwaukee River flows northward through the city of DeKalb.

DeKalb has a humid continental climate ( Köppen climate classification Dfa) typical of northern Illinois, with four distinct seasons. Summers can be hot, while winters are cold and snowy. Precipitation is somewhat uniform year-round, although it can be heavier in the spring and summer when the area is prone to strong thunderstorms.

A home in the neighborhood north of downtown DeKalb, near the Gurler House

There were 15,386 households out of which 26.6% had children under the age of 18 living with them, 33.2% were married couples living together, 11.2% had a female householder with no husband present, and 51.2% were non-families. 29.7% of all households were made up of individuals and 6.6% had someone living alone who was 65 years of age or older. The average household size was 2.44 and the average family size was 3.07.

DeKalb is home to Northern Illinois University, the city's largest employer and the third largest campus in the state. [15] Other large employers include Northwestern Medicine, General Electric, Monsanto (originally as DeKalb Corn), the local school district, and a large retail district along Hwy. 23 (and shared with Sycamore) that includes Walmart, Target, Lowes, Best Buy, Sears, Kohl's, Ross, and dozens of other chain and local stores.

DeKalb is also home to warehouses for several major companies, including Target, 3M, Nestlé, and Panduit, in part due to Dekalb's proximity to major highways such as I-88 and I-39. 3M's complex serves as the distribution hub for three of 3M's four business units and export operations to North America, Europe, Africa, the Middle East and Latin America. [16]

In 1984, the intersection of two streets in a popular NIU housing district in Dekalb begot the name of a regional consulting firm called "Greenbrier & Russel," [17] (subsequently acquired by Fujitsu Consulting in 2006 [18]). In 2011, DeKalb was the broadcast base of Up and In: The Baseball Prospectus Podcast with Kevin Goldstein and Jason Parks. [19] The town was also the filming location for the 2012 film, At Any Price

The DeKalb Park District is responsible for the 44 parks and recreation facilities in DeKalb. The park district was established in 1935 through the initiative of members of the League of Women Voters, to address the need for a public swimming pool in the community. The City of DeKalb gave the first four parks to the District: Annie's Woods, Huntley Park, Liberty Park, and Hopkins Park. By 1960, the district had eight parks and by 1970 twelve. Initially the main services provided focused on swimming and use of the outdoor parks. But as lifestyles changed, so did the district.

In the mid 1960s, the City gave the Ellwood House mansion to the district. In 1970, the park district hired its first full-time executive director and by 1980, the district had a pool, acquired Haish Gymnasium and Buena Vista, a nine-hole golf course. In 1985, the park district purchased River Heights, a second nine-hole golf course, which was later developed into an 18-hole course.

New parks were acquired as conservation areas in order to preserve floodplain lands and wildlife habitat. Other parks were established as community-wide active recreation facilities designed to serve all types of recreational uses. In addition to this system of parks the district established the Kishwaukee Kiwanis pathway system totaling over 8 miles in length, connecting DeKalb with Sycamore and the Great Western Trail to the east.

DeKalb is governed by a Council-Manager government. Policy is developed by an elected City Council then implemented by an appointed professional City Manager. DeKalb's City Council is made up of a Mayor, elected at-large, and seven alderpersons, elected by ward. Each serves a four-year term, with half the council being elected every two years. A City Clerk is also elected every four years who serves as the official record keeper of the city. City council meetings are held the second and fourth Mondays of every month.

There are 11 public schools, one private school, one university and one public library. "DeKalb". mywikicity.com. Archived from the original on March 6, 2008. Retrieved December 8, 2016. 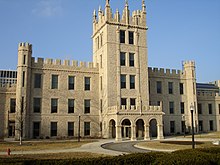 Altgeld Hall, the first building to be constructed at NIU

DeKalb is the location of two toll plazas and an oasis on Interstate 88. The oasis includes restaurants and a gas station. DeKalb is 30 miles (48 km) west of Aurora and 65 miles (105 km) west from Downtown Chicago. The local Voluntary Action Center provides two types of transportation services: TransVAC and MedVAC. TransVAC provides transportation to activities and businesses in DeKalb County and has two bus routes (the green line and blue line) that run a regular hourly route Monday through Friday and some limited evening hours for individuals with special needs. MedVAC provides transportation to out-of-town medical appointments.

The NIU Huskie Bus Line serves NIU and the surrounding DeKalb area. It has the second largest ridership-per-mile of any bus system in Illinois.[ citation needed] The Union Pacific (former Chicago & North Western) main line from Chicago to Omaha runs through DeKalb, though there is no stop at DeKalb.