The village is known as "The Gem of the Fox River Valley", referring to the location of its downtown. Established in 1890 and long known as a small river community, the village is making the transition into a major regional hub, as it has experienced considerable suburban growth over the past 20 years. Now stretching all the way west to the busy Randall Road corridor, Algonquin has become a major commercial center, with popular shopping centers and restaurants, as well as a growing corporate campus. Additionally, the village continues to see considerable residential growth. With this growth, the village has had to deal with challenges including traffic congestion and overburdened schools, yet has managed to increase the commercial tax base, preserve its character and history, and substantially increase its recreational offerings and quality of life. 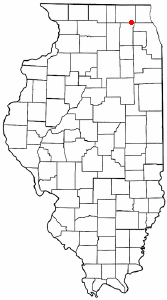 Long before Europeans settled in Algonquin, the Potawatomi Native Americans originally inhabited the land. Algonquin was the location of Indian burial mounds known in the 1800s as the Algonquin Mounds. [13] By 1834 the first settler of Algonquin, Samuel Gillilan, came to the area from Virginia. Settlers Dr. Cornish, Dr. Plumleigh, Eli Henderson, Alex Dawson, and William Jackson arrived shortly thereafter. There was some dispute regarding the original name of Algonquin, and numerous other names were suggested including Denny's Ferry, Cornish Ferry, Cornishville, and Osceola. But Samuel Edwards suggested the name Algonquin and on December 23, 1847, the name Algonquin became official.

The first signs of economic growth occurred in 1855 when the town saw the construction of the railroad, which enabled farmers in the neighboring area to have other means of getting their products to the markets in Chicago. Finally on February 25, 1890, the Village of Algonquin was formed.

The Village Hall of Algonquin was erected on January 31, 1907, at 2 South Main Street, and is still standing today, where it functions as a historical landmark and community gathering place. It served as the village hall of Algonquin until a new village hall was built at 2200 Harnish Drive in 1996.

From 1906 to 1913, the automobile companies began to go to the Algonquin Hill Climbs, which was an event where if an automobile was able to make it up a series of steep hills in the village, it would be given the stamp of approval. And because of that, the Algonquin Cup was formed which received national recognition at the time. The two hills used in the race were the Phillips Hill which extends from Illinois Route 31 to the cemetery and Perry Hill, located south of downtown, and which is now Lundstrom Lane. The village created a new hill for the race called Huntington Hill, which is now Huntington Drive. A park stands in place of the finish line of Huntington Hill at the intersection of Huntington Drive and Circle Drive which is called Hill Climb Park. The festival in recognition of the event continues to be held each year.

For much of the 20th century, Algonquin was a quasi-resort town and people from the Chicago area would visit the town in order to escape urban life. The Fox River offered immense recreational opportunities and several summer homes were constructed. Soon, more people began living in Algonquin year-round. Algonquin remained a small town for much of the 20th Century, growing steadily, until the 1980s, when the village's population exploded with new residential construction. The development continued in earnest in the 1990s and 2000s. The village's first shopping center, Algonquin Town Center, was constructed in the late 1980s on East Algonquin Road and numerous die & mold industries were established west of downtown. In the 1990s, development shifted to Randall Road, which saw the construction of numerous retailers, restaurants, and services, beginning in 1993. In 2004, the 80-store Algonquin Commons outdoor mall (the largest outdoor mall in Illinois) [14] opened for business, followed by the Algonquin Galleria outdoor mall, which is under development and saw its first stores open in 2006. In the mid-2000s, development also began on the Algonquin Corporate Campus, which is slated to include industrial and office development spread over 1,000 acres (4.0 km2) on the southwest side of the village, bringing hundreds of high-paying jobs to the area. [15] [16]

Algonquin has a council-manager form of government, where an elected Board of Trustees, led by the Village President, establishes policy & vision and approves ordinances & resolutions, while an appointed Village Manager leads a team of professional staff that carries out the policies and daily operations of the village. [17]

The Village President is Debby Sosine and the current Trustees are Laura Brehmer, Jerry Glogowski, Janis Jasper, Jerry Kautz, John Spella, and Jim Steigert. The Village Clerk, who handles village records, is Gerald Kautz. All officials are elected to four-year terms which are staggered to maintain consistency. [18] The current Village Manager is Tim Schloneger.[ citation needed]

Community Unit School District 300, a large district generally along and east of Randall Rd. The District 300 schools serving Algonquin include: [20]

St. John's Evangelical Lutheran School and St. Margaret Mary Catholic School, both located in the heart of Algonquin, offer private K-8 education. On the west side of town is Foundations Montessori School. [22]

The majority of the village is served by the Algonquin Area Public Library District which includes two facilities, the main branch on Harnish, just west of Randall Road, and a second branch on Eastgate, south of Algonquin Road. Both offer exceptional educational and reading programs. [25] Huntley Public Library, Dundee Township Library, and the Barrington Area Library also serve certain sections of the village. [26]

The village of Algonquin is a major center for shopping activities, both regionally and locally. The village is known for its chic lifestyle centers, power centers, grocers, and growing variety of restaurants. Most of the village's retail is confined to Randall Road and, to a lesser extent, Algonquin Road.

The Randall Road corridor is a regional shopping, dining, and entertainment corridor that is home to a variety of shopping centers, including lifestyle centers such as Algonquin Commons, the Algonquin Galleria, and the Esplanade, power centers like Woods Creek Commons, Oakridge Court, and River Pointe, as well as stand-alone big-box stores and small retail shops. The retail corridor also extends partially into nearby Lake in the Hills and Carpentersville. In addition to serving the needs of the local western Algonquin area, the corridor also functions as a major destination retail area serving a vast region that includes most of McHenry and northern Kane Counties.

The East Algonquin Road retail corridor is primarily a neighborhood retail area that serves the general needs of eastern Algonquin and also portions of nearby Carpentersville and Barrington. The area is centered on Algonquin's first shopping center, Algonquin Town Center, which was constructed in the late 1980s.

A growing number of businesses can be found in Algonquin. From a manufacturing corridor along Algonquin Road between Pyott Road and Route 31 to a planned corporate campus on the west side of Randall Road, industry is a significant part of the Algonquin area economy.

Under development is the Algonquin Corporate Campus on the village's west side along Randall Road. Set on over 1,000 acres (4.0 km2) stretching from Randall Road west to Square Barn Road, and north of Huntley Road, the development is aimed at providing more jobs to the greater Algonquin area. As a result, any potential business or building in the park that brings high-paying jobs has the opportunity for incentives and to have the development review process expedited. Located in the park is Young Innovations, a company that specializes in oral healthcare supplies; and Advantage Moving and Storage, a moving and storage company. Two multi-tenant industrial/office buildings have also been constructed, Rothbart Building #1 and the Algonquin Corporate Condominiums, both of which already have tenants, including Progressive Solutions and DirecTV. Additional buildings are planned for construction. Businesses the village is targeting for the park include those specializing in healthcare, technology, and research and development. Located directly adjacent to the Algonquin Corporate Campus are the village's outdoor malls Algonquin Commons and Algonquin Galleria. Also part of the park is the mixed-use Esplanade development, which currently includes 2nd and 3rd story office space for several companies. [34]

Other major industries in Algonquin include Duro-Life, a manufacturer of machine parts located along Randall Road, and Meyer Material Service, a mining company located along Route 31.

There is also over 250,000 sq ft (23,000 m2). of small office and medical office space located in various buildings throughout town, most heavily concentrated along Randall Road, Algonquin Road, and Illinois Route 31. The largest such series of office buildings is the Briarwood Center at the intersection of Randall Road and County Line Road.

The village is unique in that it does not have an actual park district, as park operations are run by the village itself. Nevertheless, the quality of parks, trails, and programs is nearly unmatched. In addition, the village's scenic waterways remain a regional draw. Some noteworthy recreational opportunities in Algonquin include: [35]

Algonquin is a center of transportation for McHenry and Kane Counties. Some of the major roadways include:

Churches in Algonquin include: [45]