From Wikipedia, the free encyclopedia
For people with the surname, see Gurnee (surname).
Village in Illinois, United States

Gurnee ( /ˈɡɜːrˌniː/) is a village in Lake County, Illinois, United States. Its population was 31,295 as of the 2010 census. [3] It borders the city of Waukegan, and is a popular tourist attraction within the Chicago metropolitan area. Best known for being the location of Six Flags Great America and Gurnee Mills, the village sees an average of over 26 million visitors annually. [4]

Early settlers in the Gurnee area came by foot horseback and by "Prairie Schooners" drawn by oxen or via the Erie Canal and the Great Lakes. They came from the town of Warren, New York, which was named in honor of Major General Joseph Warren, killed at the Battle of Bunker Hill. Warren Township, formed in 1850, was also named after him. [5] The first settlement of Warren Township commenced in 1835 in the vicinity of the Aux Plaines River (now the Des Plaines River).

In 1835-36, a land company from New York State erected a Community House (site of the old Gurnee Grade School) to accommodate families while they were locating and getting government land grants to their farms. Near the Community House, there was a Ford used by the Potowatomi Indians for crossing the river. A floating log bridge was built in 1842. Later, both a wood and iron bridge were built.

With the erection of a permanent bridge, roads were established, and this area became the hub of the township. It was at this junction that the Milwaukee Road crossed the river from west to east, and then continued north to eventually connect Chicago to Milwaukee. This road was "laid out" in 1836 by three early settlers: Thomas McClure, Mark Noble, and Richard Steele. The east-west road, now known as Grand Avenue, was a main route from McHenry County to the port of Waukegan. Stage coaches ran on this route as late as 1870.

The hamlet was originally called "Wentworth", after Congressman "Long John" Wentworth, who also served as the Republican Mayor of Chicago between 1857-1863. [6] Thereafter, Walter S. Gurnee, the 14th Mayor of Chicago and one of the directors of the railroad, agreed to develop a station in Wentworth, which was called "Gurnee Station" in honor of Mr. Gurnee. Over time, Gurnee Station became known simply as "Gurnee" and was incorporated as such.

Just east of the bridge, at the junction of Milwaukee Road and Grand Avenue, was the Mutaw Tavern, earlier known as "Marm Rudd's Tavern" and more recently as the Mother Rudd House. This was a stage coach stop between Chicago and Milwaukee and was a stopover for farmers from the west traveling to Little Fort (now known as Waukegan) to barter their crops for supplies and to ship out from the ports. It also served as a stop during the underground railroad. This building was acquired by the Village of Gurnee in 1984, has been restored, and now houses the Warren Township Historical Society.

In 1974, the Marriott Corporation announced a new theme park to be constructed in the village named Marriott's Great America. The park opened on May 29, 1976 in time with the country's bicentennial. [7]

In May 2004, Gurnee received major rainfall, causing the worst flooding in 100 years. The flood forced several schools to close [8] and caused building damage to dozens of homes and businesses. 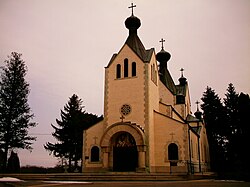 42.3% of the households had children under the age of 18 living with them, 62.6% were married couples living together, 7.8% had a female householder with no husband present, and 27.4% were non-families. 22.7% of all households were made up of individuals, and 6.4% had someone living alone who was 65 years of age or older. The average household size was 2.71, and the average family size was 3.25. 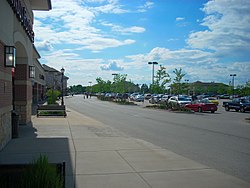 The Gurnee Town Centre, a shopping district in West Gurnee

According to Gurnee's 2018 Comprehensive Annual Financial Report, [14] the top employers in the village were:

The majority of the eastern half of the village is served by Gurnee School District #56. Four schools make up District #56. They are:

The western section of Gurnee, along with portions of the village's eastside is served by Woodland Grade School District #50. Woodland comprises:

The village is served by Warren Township High School, which is made up of the O'Plaine Road Campus (freshmen and sophomores) and the Almond Road Campus (juniors and seniors). According to the 2007 state report card, both Woodland District #50 and Gurnee School District #56 has full recognition. [15]

The Gurnee Public Library is located at 224 N. O'Plaine Road. The Warren-Newport Public Library offers a collection of over 270,000 books, hundreds of magazines, and over 37,000 CDs and DVDs, as well as programming for all ages designed to provide personal enrichment, education and entertainment. The library serves a population of 60,000 residents.

In 2004, the library was one of the early adopters of passive RFID ( radio frequency identification) technology for the automation of item check-in (News Sun, September 28, 2004).

According to statistics gathered by the Library Research Center at the University of Illinois, the Warren-Newport Public Library is the second busiest library in Lake County, after the Cook Memorial Library in Libertyville. (News Sun, October 3, 2006).

According to its mission statement, the Warren Newport Public Library "provides the community with access to information, kindles the imagination of children and adults, and supports lifelong learning."

Gurnee is notable as being one of the only major Chicago suburbs that is not serviced by Metra, although there are nearby stations in Waukegan, Grayslake, and Libertyville.

The village of Gurnee is a home rule municipality which functions under the council-manager form of government with a Village President and a six-member Board of Trustees, all of whom are elected to four-year terms. The Village President and three of the Trustees are elected every four years. The other group of three Trustees are also elected for four-year terms, but this election is staggered and takes place two years after the first group.

Mayors (past and present)