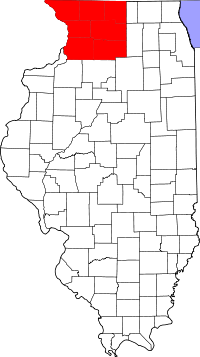 Northwestern Illinois is a geographic region of the state of Illinois within the USA.

The largest city in this region, located near the eastern edge, is Rockford. Rockford's Metropolitan Area includes Winnebago County and Boone County (to the east), with an estimated 2009 population of 353,722. [1]

Former US President Ronald Reagan was born in the Whiteside County town of Tampico, IL.

The geography of northwestern Illinois varies from that of the rest of the state. The area is primarily in the Coulee Region, which is characterized by bluffs, valleys, and rolling hills. Two counties most characteristic of the Coulee region are Jo Daviess County and Carroll.