From Wikipedia, the free encyclopedia
Not to be confused with Park Forest, Illinois.
Village in Illinois, United States

Forest Park (formerly Harlem) is a village in Cook County, Illinois, a suburb of Chicago, United States. The population was 14,167 at the 2010 census. [3] The Forest Park terminal on the CTA Blue Line is the line's western terminus, located on the Eisenhower Expressway at Des Plaines Avenue. [4] 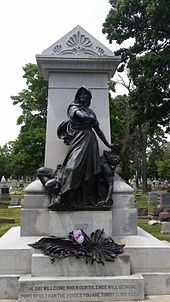 The community (formerly part of a larger town called Harlem) officially became incorporated under the name of Forest Park on April 17, 1907.

For much of its history, Forest Park was known as a "Village of cemeteries", with more dead "residents" than living ones; some figures estimate the ratio at 30:1, dead to alive. Forest Park cemeteries include Altenheim, [7] Forest Home Cemetery (incorporating the German Waldheim Cemetery), [8] Jewish Waldheim (producer Mike Todd is buried in Beth Aaron there [9]), [10] Woodlawn [11] [12] (including Showmen's Rest), [13] [14] and Concordia. [7] [15] Forest Home Cemetery is home to the famous Haymarket Martyrs' Monument. [16]

The Naval Ordnance Station Forest Park (originally a Naval Ordnance Plant) operated from early in World War II until most of the plant was replaced by a mall in 1971, with some of the site used as a Naval Reserve center until 2007. The plant employed up to 6,500 workers and produced 19,000 torpedoes during World War II. [20]

Women's professional baseball/softball has roots in Forest Park. Emery Parichy purchased the Boston Bloomer Girls softball team in the early 1930s, renamed them Emery Parichy's Bloomer Girls, and moved them to Forest Park. The team operated in the suburb until 1955, when the land their softball field was on was taken for the Eisenhower Expressway. [22]

Forest Park was the location of Forest Park Amusement Park, [23] a small but popular amusement park located just west of Desplaines Avenue, and just north of the then Waldheim Cemetery, from 1907 to 1922. Initially, the park was received negatively by Chicago area church members due to its close proximity to the cemetery. However, its public acclaim helped bring in a crowd of approximately five to ten thousand on opening day, and the various rides, games, and shows the park had to offer kept residents coming back. [24] On July 25, 1918, a fire broke out in the swimming pool's boiler room. The fire quickly spread to other utility areas of the park which left firefighters without access to water and power. The park planned to reopen later that same day, though 1/5th of the park was destroyed by the fire. In the years following the fire, the park was mostly successful primarily due to events and activities that helped the community and the park's occasional rallies against prohibition. However, with the 18th Amendment taking effect coupled with a strict crack-down on gambling, the park never reopened following the cessation of its 1922 season. [25] [26] Its former location is now occupied by the Forest Park station on CTA's Blue Line at Desplaines Avenue. [17] [27]

For most of its history, Forest Park was home for the 25-year-old professional (non-equity) theater company, Circle Theatre, which now resides across Harlem Avenue in neighboring Oak Park. [28] Hedy Weiss of the Chicago Sun-Times writes: "One of the most consistently satisfying theatrical operations in the area ...everything from classics to new American plays ...theatre at its very best." Circle Theatre has produced over 175 productions and received over 80 Joseph Jefferson (JEFF) nominations and won over 30 Jeff Awards. [29] Notable visits from famous playwrights have included Marvin Hamlisch, Rupert Holmes, Douglas Post, Michael John LaChiusa, Stephen Clark and Rebecca Gilman. [28] Rebecca Gilman had her first play produced at Circle Theatre before becoming one of America's leading playwrights. Notable supporters have included Harry Connick, Jr. and Russell Crowe. [28] Award-winning Director/Choreographer Kevin Bellie was Artistic Director from 2003-2012. [30]

The village of Forest Park runs under a village commission form of government led by a mayor and four commissioners elected every four years.

The United States Postal Service operates the Forest Park Post Office at 417 Des Plaines Avenue. [34] The post office contains a mural, The White Fawn, painted in 1940 by Miriam McKinnie. Murals were produced from 1934 to 1943 in the United States through the Section of Painting and Sculpture, later called the Section of Fine Arts, of the Treasury Department.

The Park District of Forest Park, located near the center of the village, has a 15-acre (61,000 m2) park, with an aquatic center. Shopping is mostly located on Madison Street. Previously known for many taverns, it now also features antique merchants, boutiques, and eating establishments. Recently it was voted by the readers of the Chicago Tribune as the "Best Neighborhood Dining" in the Chicago area.

In the last few days of July and first few of August, Forest Park's Park District plays host to the Forest Park No Glove National Invitational Softball Tournament. This is an invitational to all the best 16-inch softball teams in Chicago metropolitan area (and sometimes from other regions). The game is slow-pitch softball played without gloves, a favorite in the region.

Every autumn the St. Bernardine Church hosts an Oktoberfest and the village hosts a Rib-fest.

The village has several industries, but the most prominent is Ferrara Pan, now known as simply the Ferrara Candy Company. The candy factory can be seen and smelled from the Harlem Blue Line stop.

The town is served by a weekly newspaper, the Forest Park Review, coming out every Wednesday. It is printed by Wednesday Journal, Inc. A bi-monthly publication, The Forest Park Post, is distributed to all homes and businesses in Forest Park and is published by 34 Publishing, Inc.

There is a NFP citizens advocacy and information organization known as Vox 60130 (formerly Citizens United in Forest Park) serving the community since 2004. It monitors local governmental meetings and activities and sponsors workshops and presentations of important, relevant issues. They also hold candidate forums during each local election cycle.

There was a controversy on Forest Park over the legalization of video gambling from the years 2015 to 2019. It was a topic of public debate in the public square, and on social media.

The Forest Park Public Library is located at 7555 Jackson Boulevard. [36] The current library building opened on October 8, 1995. It covers 26,400 square feet (2,450 m2) over two levels and is completely accessible in compliance with the Americans with Disabilities Act. It is spacious and comfortable, with more seating and study areas, along with a meeting room, a youth activity room and computer room. The total cost of the building was projected to be $3,295,000, including construction, site improvements, furnishings, computer and security systems, professional and financing costs and contingencies. The funding comes from the Imber Fund, now grown to $900,000, a State of Illinois Construction Grant of $250,000, General Obligation Bonds for $2.9 million and interest income.