Henderson County is a county located in the U.S. state of Illinois. According to the 2010 United States Census, it has a population of 7,331. [1] Its county seat is Oquawka. [2] 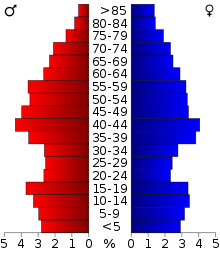 As part of Yankee-settled Northern Illinois, Henderson County was solidly Whig in its first three elections and then equally Republican from that party’s formation until the Great Depression. Franklin D. Roosevelt in 1932 was the first Democrat to win it, but the county returned to Republican Alf Landon in 1936 and was not won by a Democrat until the GOP nominated the southern-oriented conservative Barry Goldwater in 1964.

After that, like many Yankee counties, it returned to its Republican roots between 1968 and 1984, but with the shift of the GOP to a Southern Evangelical perspective Henderson County turned reliably Democratic in presidential elections from 1988 to 2012. Economic concerns in the “ Rust Belt” led populist Republican Donald Trump to carry the county with over 61 percent of the vote in 2016; the highest percentage won by any Republican candidate since Dwight D. Eisenhower in 1956, and the lowest by a Democrat since Al Smith in 1928.