The village of Bolingbrook is a southwest suburb of Chicago in Will and DuPage counties in the U.S. state of Illinois. As of the 2017 US Census, the population is 75,201 [5]. It is the 17th largest incorporated place in Illinois and the state's 2nd largest village.

Interstate 55, locally the Stevenson Expressway, runs through the southern part of the village heading northeast toward Chicago and southwest toward Plainfield and Joliet. Interstate 355, also known as the Veterans Memorial Tollway (formerly the North-South Tollway), runs along the far east side of the village between New Lenox and Addison. Illinois Route 53, locally known as Bolingbrook Drive, runs north–south through the middle of the village.

There were 17,416 households out of which 48.0% had children under the age of 18 living with them, 66.5% were married couples living together, 10.9% had a female householder with no husband present, and 18.2% were non-families. 14.2% of all households were made up of individuals and 2.8% had someone living alone who was 65 years of age or older. The average household size was 3.22 and the average family size was 3.56. 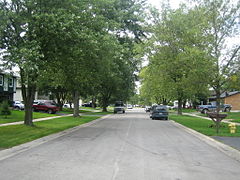 A typical neighborhood street in Bolingbrook

Bolingbrook is a relatively new suburb of Chicago, having been incorporated in 1965. The first settlement in what is now Bolingbrook was established in 1831, but the informal farming villages remained unincorporated for over 130 years. The tiny Boardman Cemetery, in what is now the Heritage Creek subdivision, contains the remains of some of these early residents.

The village continued to grow steadily for the remainder of the 1960s, reaching a population of 7,000 by 1970. The 1970s were the first period of rapid growth in Bolingbrook, during which its population quintupled to reach over 37,000 by 1980. Much of this growth was as much due to mass annexation as well as raw population growth; the population of Bolingbrook by the 1970 census but with its 1980 land boundary was approximately 25,000, further reflecting the vigorous annexation that took place during the 1970s. [12]

John J. "Jack" Leonard was instrumental in the village's incorporation and served as the village's first mayor. [13] Prior to hiring a full-time police chief, he served "double-duty" as both Village President and part-time Police Chief.[ citation needed] Eventually, the first police chief, Fred Greening was hired. He was recruited from the detective division of the Detroit Police Department.[ citation needed]

In 1971, Bolingbrook purchased station 2 from the Lemont Fire Protection District, which had been serving much of the village, thus establishing its own fire department. Since then, that station has been expanded and four others have been built. [14]

The mayor of Bolingbrook is Republican Roger C. Claar, who has served in that role since 1986. [15] In 2007, Claar came under scrutiny for his lavish lifestyle funded by his campaign fund. [16] [17]

According to the Bolingbrook Park District's 2017 Comprehensive Annual Financial Report, [22] the top employers in the village are:

Major highways in Bolingbrook include:

School District 365U was originally known as District 94. It took its present name when it became the first school district in the United States to implement the 45-15 plan, in which schools were occupied year round with 3/4 of the students in session at any one time. Students went to school for 9 weeks and then had 3 weeks off. Additionally, teachers were optionally allowed to work year-round.

Parochial grade school students may go on to Catholic high schools in proximity to Bolingbrook such as Benet Academy in Lisle, Joliet Catholic Academy in Joliet, and Mount Assisi Academy (Girls) in Lemont.

In 1982, the Park District opened the first indoor wave pool in the United States. It was closed shortly after the BRAC and Pelican Harbor opened in 1996, and has since been converted to an ice skating arena. [26]

In 2009, the Park District opened its Hidden Oaks Nature Center, which sits on 80 acres of woodland and river plain habitat. The Nature Center has a Platinum LEED Rating from the U.S. Green Building Council and was built from recycled materials. As of 2014, the Nature Center is used to run naturalist programs and summer camps. Animal residents include: coyotes, deer, great horned owls, and other species common to Northern Illinois. [27]

Bolingbrook is home to the Boughton Ridge Golf Course, a 9-hole course owned by the Bolingbrook Park District. In addition, the Bolingbrook Golf Club, a municipal facility which includes an 18-hole course, is in the village. Other Golf Courses within proximity of Bolingbrook include Naperbrook GC, Tamarack GC, Wedgewood GC, and Links at Carillon (all in Plainfield), White Eagle GC and Springbrook GC in Naperville, Village Greens of Woodridge and Seven Bridges GC in Woodridge, Cog Hill GC in Lemont, and Mistwood GC in Romeoville.

Clow International Airport is a small airport off of Boughton-Weber with an estimated 3,362-foot (1,025 m) runway. Clow is a public (non-commercial) airport, owned by the Village and operated under a contract with a management company. In 1989, the airport was named the "best privately owned, public use airport in Illinois." Currently, there are 70,000 take-offs and landings at the airport annually. [28]

A WGN-TV helicopter is stationed at Clow Airport.[ citation needed] The airport previously served as a base station for Air Angels Aeromedical Transport before the company closed its doors in early 2009. It also provides flight training and airplane charters through A & M Aviation, aircraft maintenance through A & M Maintenance, and has an EAA chapter that provides free Young Eagles flights for children.

The Illinois Aviation Museum at Bolingbrook was formed in 2004. The museum is staffed by volunteers and is in a remodeled hangar at Clow International Airport, currently donated by the Village of Bolingbrook.