Naples is a city in Collier County, Florida, United States. As of the 2010 Census, the city's population was 19,539. Naples is a principal city of the Naples-Marco Island, Florida Metropolitan Statistical Area, which had a population of about 322,000 as of 2015. Naples is one of the wealthiest cities in the United States, with the sixth-highest per capita income in the country in 2012, [6] and the second-highest proportion of millionaires per capita in the US. [7]

Before the European colonial period, the Calusa tribe had dwelt in the region for thousands of years, from Charlotte Harbor to Cape Sable. In 1513, Juan Ponce de León landed in the region and found resistance from the Calusa, which was then followed by nearly 200 years of strife between the Spanish and the Calusa. In the early 1700s, following slaving raids by Uchise Creek and Yamasee tribes allied with the English Province of Carolina, most of the Calusa retreated south and east. [8]

The city of Naples was founded during the late 1880s by former Confederate general and Kentucky U.S. Senator John Stuart Williams and his partner, Louisville businessman Walter N. Haldeman, the publisher of the Louisville Courier-Journal. Throughout the 1870s and '80s, magazine and newspaper stories telling of the area's mild climate and abundant fish and game likened it to the sunny Italian peninsula. The name Naples caught on when promoters described the bay as "surpassing the bay in Naples, Italy". Major development was anticipated after the railroad reaching Naples on January 7, 1927, and the Tamiami Trail linking Naples to Miami was completed in 1928, but did not begin until after the Great Depression and World War II. During the war the U.S. Army Air Forces built a small airfield and used it for training purposes; it is now the Naples Municipal Airport.

After a hurricane in 1945, fill was required to repair the damage. A local dredging company, Forrest Walker & Sons, created a lake north of 16th Avenue S, between Gordon Drive and Gulf Shore Boulevard. In 1949, Forrest Walker asked Mr. Rust to sell him the 296 acres (120 ha) from Jamaica Channel to today's 14th Avenue S. The Jamaica Channel was widened, one canal was dredged, and 14th Avenue S was created by March 1950; a new subdivision was named "Aqualane Shores" [9] at the opening party that same year. Additional channels were eventually added to the south of 14th Avenue S and are named alphabetically for local water birds. The first channel south of 14th Avenue S is Anhinga Channel, then Bittern Channel is south of 15th Avenue S, Crane Channel is south of 16th Avenue S, Duck Channel is south of 17th Avenue S, and Egret Channel is north of 21st Avenue S. From the channels there are coves named Flamingo, Gull, Heron, and Ibis, as well as the original Aqua Cove. These initial channels, canals, and coves were dredged and bulldozed from the mangrove swamps. Where shallow rock precluded digging, land was filled to create lots with navigable water.

The Aqualane Shores Association was incorporated as a non-profit corporation on February 3, 1966. It served lot owners in the area roughly bounded by the Bay of Naples to the east, Gordon Drive to the west, and the land between 14th Avenue and 21st Avenue S, as well as Marina Drive, Forrest Lane, and Southwinds Drive. Thirty years later, in 1996, a state-mandated city master plan renamed the area to the Aqualane Shores Neighborhood and extended its boundary west to the Gulf of Mexico, east to the Bay of Naples, and the area from 14th Avenue S all the way south to Jamaica Channel. The numerous canals and waterfront homes add a distinctive feature to the south portion of Naples and provide access to the Gulf of Mexico for many homeowners.

There were 9,708 households, out of which 10.9% had children under the age of 18 living with them, 53.8% were married couples living together, 5.0% had a female householder with no husband present, and 39.2% were non-families. Thirty-four percent of all households were made up of individuals, and 20.1% had someone living alone who was 65 years of age or older. The average household size was 1.92 and the average family size was 2.38.

The economy of Naples is based largely on tourism and was historically based on real estate development and agriculture. Due to its proximity to the Everglades and Ten Thousand Islands, Naples is also popular among ecotourists.

In 2009, Naples placed 10th in a report by U.S. News & World Report titled "10 Pricey Cities That Pay Off." The report ranked cities by its "amenity value," a measurement based on the amount of satisfaction an asset brings to its owner. [12]

Naples experiences a tropical savannah climate ( Köppen climate classification: Aw). [13] Naples reports more than 2,900 hours of sunshine a year and more than 300 sunny days a year. Naples is normally frost-free and the growing season is 365 days.

Naples is served by the District School Board of Collier County and various private institutions including the following: [16]

While no colleges are based within the city limits, Ave Maria School of Law is located in Vineyards, and Florida SouthWestern State College has a satellite campus in Lely Resort. [17] Also, Florida Gulf Coast University operates continuing education classes from their Downtown Naples campus, [18] and Hodges University has a campus in North Naples. Higher education institutions close to Naples include:

Highways that pass through Naples are I-75 and US-41. The city is served by the Naples Municipal Airport.

Healthcare Network of Southwest Florida (HCN) was founded in 1977 to serve migrant farmworkers and their families in Immokalee. It now provides care to over 41,000 residents of Collier County through 20 practices, including internal medicine, family practice, obstetrics and gynecology, pediatrics, behavioral health [21] and dental care. [22]

Tourism is a major industry for the city. The Naples area is home to several major land reserves, including the Corkscrew Swamp Sanctuary, Everglades National Park, Big Cypress National Preserve, Florida Panther National Wildlife Refuge, Ten Thousand Islands National Wildlife Refuge, and Picayune Strand State Forest. The Corkscrew Swamp Sanctuary is known not only for its 11,000 acres (45 km2) of landscape and wildlife, but for a two-and-a-half-mile-long boardwalk winding through the sanctuary. [23] The Naples area is also home to the Naples Zoo at Caribbean Gardens, which dates back to 1919. [24]

Downtown Naples is home to The Naples Players, the 5th Avenue South, and 3rd Street South shopping districts, which feature a variety of antique shops. Gallery Row is a concentration among the numerous art galleries spread throughout the downtown area. The Village on Venetian Bay is an upscale open-air shopping district on the Gulf coast. Located directly off of Tamiami Trail are the Waterside Shops, an upscale open-air shopping center with popular stores such as Gucci and Louis Vuitton. Near downtown on Naples Bay and the Gordon River is the shopping district of Tin City. This open-air shopping center specializes in antiques and handmade local novelties. Naples is also the home of swamp buggy races, held three times each year at the Florida Sports Park.

The Naples Half Marathon is a half marathon held every year in Naples since 1989, [25] with record participation in 2013 of 2,038 runners. The race has been called one of the best half-marathons in the United States by Runner's World magazine. [26]

Pickleball is an increasingly popular sport in Naples. Because of this, many parks have added pickleball courts. Naples is home to the U.S. Open Pickleball Championships, which have been held annually since 2016.

In December 2009, Florida Governor Charlie Crist met with Chicago Cubs president Crane Kenney, chairman Tom Ricketts and other team officials about possibly moving the Cubs' spring training and minor league facilities from Mesa, Arizona, to Naples. [27] The Cubs eventually chose to stay in Mesa and build a new facility there. [28] [29]

Naples has a semi-pro soccer team, Naples United FC, which was founded in 2017. They currently play in the Sunshine Conference of the National Premier Soccer League. Naples is also the home of swamp buggy races, held three times each year at the Florida Sports Park. The swamp buggy was invented in Naples. [30]

Naples is home to The Naples Players, Naples Shakespeare Festival (and sister company Marco Island Shakespeare Festival), [31] Opera Naples, and the Equity Theatre Companies Theatre Zone and Gulfshore Playhouse. [32] The Naples Philharmonic and The Baker Museum are located at Artis—Naples, which also serves as the educational campus for the Naples Philharmonic Youth Orchestra, Youth Chorus, Youth Jazz Orchestra and Youth Symphony. [33] The Holocaust Museum and Education Center of Southwest Florida educates about 155,000 students each year both in its facility and with a locally traveling exhibit.

The beach on the coast of the Gulf of Mexico is more than 10 miles (16 km) long and is known for its cleanliness and pristine white sand. In 2005, Naples was voted the best all-around beach in America by the Travel Channel. [34] [35]

The Naples Fishing Pier is one of the area's better-known landmarks.

With more than 80 championship golf courses in the Naples area, Naples is the self-titled "Golf Capital of the World", as it has the second most holes per capita out of all communities, and the most holes of any city in Florida. [36] [37] [38] 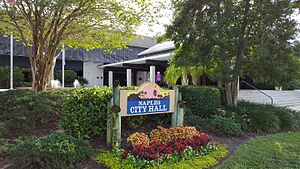